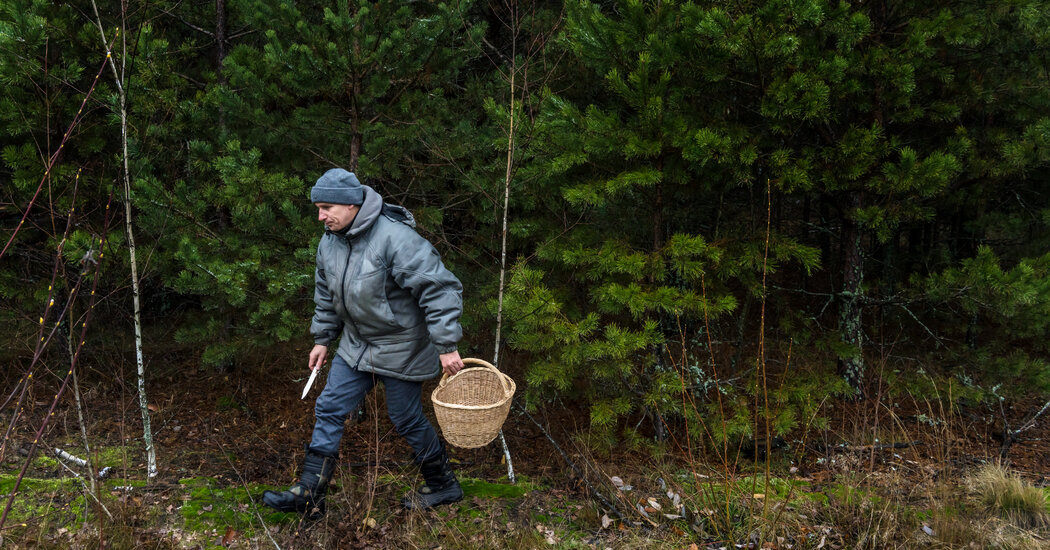 Hunting for mushrooms deep in the forest is the ideal socially distanced pastime.

Viktor Klimov, a professional mushroom hunter, stalking his prey in the forest near the village of Dobrianka, Ukraine, this month.Credit…Brendan Hoffman for The New York Times

KHOMUTYNSI, Ukraine — Valery Kravchuk, a seasoned mushroom hunter, pushed aside some dead leaves to reveal his prize: a beautiful blusher, so called because it turns pink when pinched.

“Mushrooms are like magnets for me,” he said. “I feel them.”

This fall, Ukrainians have been driving their cars down country roads, getting out and walking deep into the forest for the world’s most socially distanced pastime: mushroom hunting.

By serendipity, the country had a bumper crop of mushrooms in a year when gathering them remains one of the few activities for those wanting to get out of the house while avoiding other people.

Ukrainian biologists chalked up the bounty this fall to a dry summer followed by an unusually warm fall and late first frost, coming only at the end of November.

“All the mushrooms which were supposed to grow starting in July had to fit into a month and a half this autumn,” said Zinaida Kosynska, a mycologist and author of Ukrainian mushroom guidebooks.

Image A variety of wild mushrooms found in the forest.Credit…Brendan Hoffman for The New York Times

“It’s been amazing,” said Emilia Koleda, a professional mushroom hunter who sells her finds on the shoulder of a highway outside Kyiv, the capital.

She stood beside seven buckets of boletus mushrooms, a late season delicacy that she said she scooped up during just a single forest excursion. In past years, three buckets made for a good day.

The mushroom bonanza has been a lucky break in a poor country, where mushrooms are a staple for some families, while others supplement their income by picking for the market.

Ms. Koleda said there were no other possibilities to earn money because of lockdowns. With her income, she bought firewood for winter heating and everything her grandchildren needed for school.

“Mushrooms saved so many people this year,” she said. “Nature helped us through the quarantine.”

In Ukraine, a line of cars parked on the roadside in the middle of nowhere is a telltale sign that hunters are about, walking quietly among the trees, carrying small mushroom harvesting knives.

“It is my way to be in nature,” said Andriy Hrybovskyi, whose last name translates as “mushroom,” a sign of the activity’s deep roots in Ukraine. He knows a few spots in a forest he can visit after work, to breathe fresh air and find dinner.

Svitlana Kravchuk and her husband, Valery Kravchuk, in the root cellar where they keep their potatoes and preserved foods, including mushrooms.Credit…Brendan Hoffman for The New York Times

Knowledge of the sites in the forest where mushrooms grow is the currency of mushroom hunters, both professional and amateur, and that knowledge is a closely guarded secret.

When asked for advice on locations, the etiquette for a polite Ukrainian mushroom hunter is to describe some phony spots, so as not to appear rude, while in fact never revealing where the mushrooms really are. Ukrainians who have taken to tagging spots on Google maps are seen as spoilers of this tradition.

Many Ukrainian families appoint a designated taster, usually someone deeply versed in the various species who knows which to avoid. The taster will sample the harvest a day before everybody else, just in case. It is a grim tradition, but necessary.

Viktoria Ganzha, from Poltava in eastern Ukraine, who tastes for her family, has been busy this year. She described the role as that of a sapper, the first to enter a minefield. “I am the de-miner,” she said.

The Ukrainian government has reported an increase in poisonings this year, the sad downside of the mushroom bounty. By mid-November, 289 people had been poisoned and 11 had died, the government said.

What’s to eat? Mushrooms, of course.Credit…Brendan Hoffman for The New York Times

The authorities closely monitor another danger in Ukraine, radioactive mushrooms picked in the region surrounding Chernobyl. Harvesting in the area is illegal, but the mushrooms popping up in the Chernobyl zone this fall have fascinated Ukrainians over anecdotal accounts that they are unnaturally large, fitting the stereotype of radiation’s effects on top of an already good mushroom year.

The police arrested one group of men smuggling 120 pounds of mushrooms from the Chernobyl zone.

Professional pickers this year are also finding an abundance of the common toadstool.

Viktor Klimov, a professional picker in the pine forests in northern Ukraine, specializes in the toadstool. The cartoonish, red-and-white polka-dot mushrooms are poisonous but seen to have medicinal qualities in tiny doses, including bolstering the immune system. Dried toadstools are in demand.

“I have never seen so many toadstools in my entire life,” Mr. Klimov said of this year’s mushroom season.

The pine forests where Mr. Klimov works are overgrown with moss, making hunters’ steps silent. Out in this forest, every spoken word feels like a crime. Hunters speak only in a whisper.

A woman displaying dried mushrooms she picked herself to a potential customer on a street corner in Zhytomyr, Ukraine.Credit…Brendan Hoffman for The New York Times

Mushrooms like warm and rainy weather, but not too much of either. They need balance — and this is exactly the feeling that those who pick them are looking for, too, particularly in this unstable year.

Mr. Kravchuk, who was hunting this month for blushers, drives slowly on the muddy, barely passable road leading to his spot — a grove of 100-year-old oaks between farm fields — believing the mushrooms like a calm atmosphere.

But while he loves to pick them, Mr. Kravchuk does not enjoy eating them.

When he returned home, he nibbled a few as a precaution, and then set them aside for his family to pickle or fry with potatoes and onions.