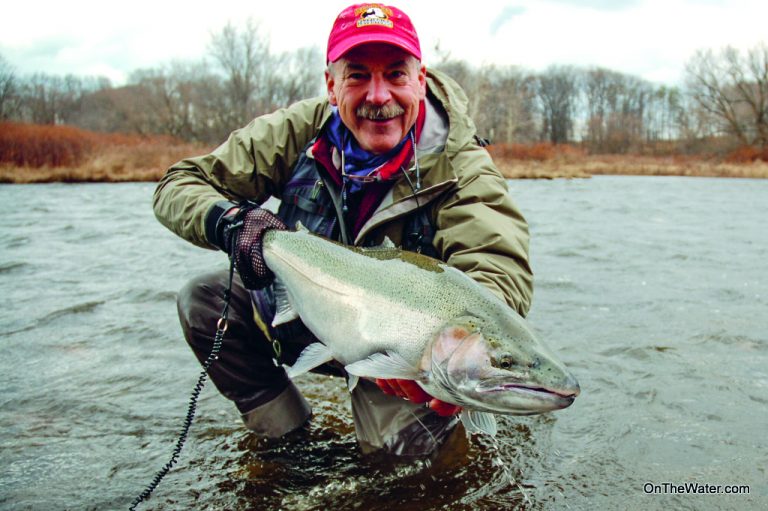 Finding and catching more steelhead on the Salmon River, or anywhere else for that matter, starts with good planning and an understanding of your quarry. Here are five tips to help you do just that.

When a steelhead enters the Salmon River, it’s on a mission. To accomplish that, it has four basic priorities: food, shelter, deep water, and reproduction. While it may be true that a steelhead doesn’t have a huge brain, it’s a master at accomplishing its mission while keeping these priorities in mind. So, to find and catch more steelhead, an angler’s approach must reflect an understanding of the priorities of this exciting fish. Let’s look at each item through the mind of a typical steelhead. In other words, let’s think like a steelhead.

Justin Solak poses with an upstate New York steelhead.Simply put, steelhead want to get upstream using the fewest calories possible while taking in as many calories as possible. The need to store up energy and fat for the long winter ahead is a driving force for the fish. Thanks to an abundance of high-calorie junk food, many of us are in an ongoing battle to keep the fat off, struggling to eat fewer calories than we burn.

With the mission underway, steelhead immediately focus on adding fuel for the journey. So, let’s learn something about this priority

As steelhead enter the Salmon River in the fall, they are primarily hunting one thing: high-calorie salmon eggs. The timing is perfect since those eggs have recently been laid by chinook and coho salmon on their annual fall spawning runs. Salmon generally enter the Salmon River and other Lake Ontario tributaries in early to mid-September, though in recent years, there have been more and more fish arriving as early as mid- to late August. As the salmon spawn, the eggs are lodged in the redd. Most become a delicious trail of food tumbling downstream, ready to be gobbled up by hungry steelhead.

The main diet of fall steelhead are high-calorie salmon eggs.

How does this help find and catch more steelhead? By telling us to locate and fish typical salmon spawning areas, especially the areas downstream. If you see salmon spawning, the last thing you want to do is disturb them by casting and trying to catch them. If the overall health of the future fishery isn’t a good enough reason to resist the temptation, think about this: If you disturb the spawning salmon and they stop laying eggs, any steelhead feeding on those eggs will leave the area.

When a steelhead enters the Salmon River from Lake Ontario, it has just left a huge body of water approximately 180 miles long, 90 miles wide, and over 700 feet deep.

The river is only about 13 miles long, a couple of hundred feet wide and, on average, only a few feet deep. Quite a change of accommodations.

Gary Edwards has been fishing and guiding on the Salmon River since 1980.

Therefore, except when in shallow salmon-spawning areas, steelhead tend to search for the deepest water they can find. While they tend to congregate in deep pools when not actively feeding or moving upstream, big, deep pools—like the Black Hole on the Salmon River—are not always the best place to catch them. Inexperienced anglers tend to hang around bigger, deeper, well-known pools, casting all manner of bait and lures, using too much split shot, heavy line, and a general flair for distressing any steelhead trying to rest. These anglers may be able to see fish but will rarely catch any.

If a pool has been disturbed, other good places of shelter include fallen or overhanging trees, undercut banks, large rocks that create an eddy downstream, turbulent riffles, and bridges.

When moving upstream, steelhead are like a train on a track, but in the river, the channel is the track. Keep in mind that the fish want to move safely, with as much shelter as possible. Therefore, they follow the deepest channel. Many times, the channel may only be a few feet or, in some cases, only a few inches deeper than the adjacent water, but it is still deeper. To most effectively target steelhead, figure out where the channel is and concentrate your efforts accordingly.

You can also watch other anglers on each side of the river. Many anglers stand close to the edge of the channel since they tend to wade as far out as they feel they can safely stand. Looking upstream and downstream generally gets you a good idea of where the channel lies, since the other anglers are channel markers.

Steelhead stick to the river channel and deeper water found there, so successful anglers must wade to get within casting range.

Using more split shot than you would to fish, cast a few feet ahead of yourself and note the approximate depth. Next, cast two feet farther. Keep increasing the distance a couple of feet per cast until you find the deeper water.

With fluctuating water levels, the next time you return to fish that part of the channel, you may not be able to safely wade to the same area. Although things will look different with a change in water level, the channel hasn’t moved. Migrating steelhead will still be there, so once you locate a channel, make some mental notes of landmarks on each bank so you can identify the area under differing water conditions.

Most beginners either overestimate or underestimate steelhead when choosing their gear. I’ve seen anglers on the river with surfcasting outfits because the fish are big, and others with short ultralight rods since steelhead are trout.

For spin fishing, look for an 8- to 10-foot, slow- to medium-action rod rated for 8- to 12-pound test line, and a good quality reel with a smooth drag system. Prices vary depending on the brand and quality, but you should be able to get a reasonably good setup for $250 to $350. If you spend less, chances are you will not be happy. The first good-size steelhead you hook into will “smoke your drag” on its way back to Lake Ontario.

Spool the reel with 8-pound-test line, and tie on a barrel swivel and then about three feet of 6-poundtest tippet. Fresh egg sacs are the preferred bait – fresh being the operative word. Don’t buy salmon eggs or sacs in a jar from a chain store! Chances are they were chemically preserved a long time ago and have been sitting in a warehouse. You can find fresh eggs at a local tackle shops near the river you are fishing.

The most productive flies are egg patterns.

For fly fishing, use a good quality 9- to 10-foot, 6- or 7-weight rod with a matching reel. Line it up two sizes lighter than the rod weight because it’s essential to get your fly to the bottom where the steelhead will be.

The most productive flies are egg patterns. To make them appear as natural as possible, you’ll need to add split shot and get them bouncing along the bottom. Adding the split shot exaggerates the weight of your fly line, so starting with lighter line now makes sense since the weight of the shot balances out the weight of the light line.

As with spin fishing, use 6-pound-test tippet, though in lower, clear water, I often drop to 4-pound test. In higher, murky water, you can bump up to 8-pound test, but never higher. Whether spin or fly fishing, you want a rod that is relatively long and somewhat soft to act as a shock absorber because of the need to use a light tippet. This equipment summary is not to say you can’t catch steelhead swinging streamers, but that’s a story for another day.