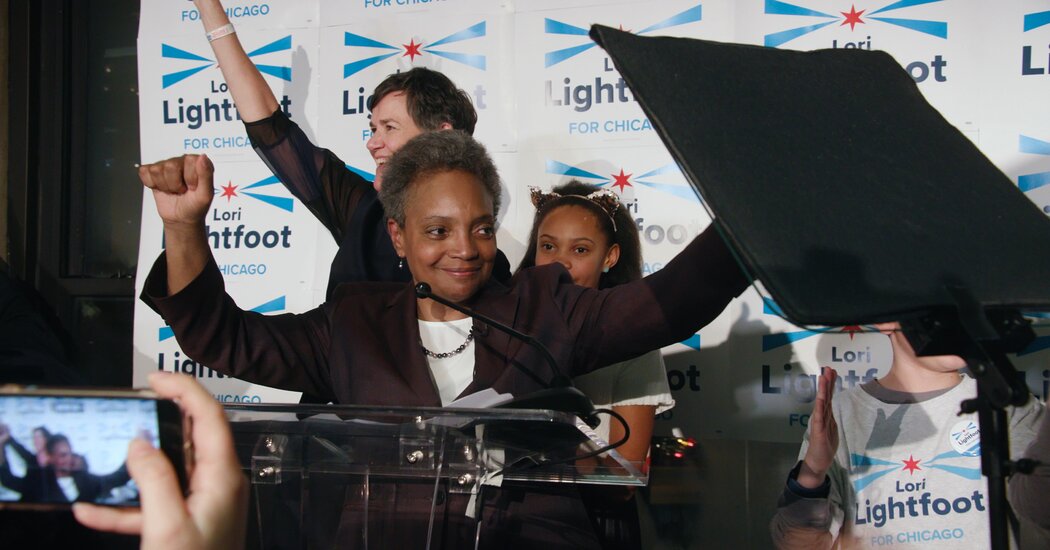 In Steve James’s documentary of the 2019 Chicago election and its aftermath, politics is local, and it’s fascinating.

Lori Lightfoot was elected mayor of Chicago in 2019. The contest forms the spine of “City So Real,” a new documentary series by Steve James.Credit…Chicago Story Film, LLC/National Geographic

Midway through the documentary “City So Real,” Christie Hefner, the former chief executive of Playboy, hosts a “salon dinner” for some Chicago luminaries. With a stunning high-rise view as a backdrop, they talk about their town’s future: whether it will become a gleaming “global city” or descend into “chaos.”

Susan Richardson, the former publisher of the Chicago Reporter, a monthly focused on poverty and race, argues that it’s a false dichotomy to frame the city’s future as a choice between its wealthier and poorer residents. “I don’t think our city leaders see the connection between ‘OK, I’m going to make a deal with Deutsche Bank,’” she says, “and the woman who’s working in the braiding shop.”

Making that connection is, in a way, the mission statement of “City So Real,” a sweeping, radically curious five-part series from Steve James (of “Hoop Dreams” and “America to Me”). Often, we see political issues discussed from the vantage of that salon dinner — an elevated, aerial view of the city. But James, in the story of a crucial election and its aftermath, captures Chicago from every angle, from the penthouses to the cracked sidewalks, City Hall to the nail salons.

The result airs as a one-night special Thursday on National Geographic, amid an election in which cities have risen up in protest, struggled with a pandemic and been demonized by the Trump administration as “anarchist jurisdictions.” Chicago in particular has been caricatured as a lawless disaster zone by conservative politicians, including the current president.

“City So Real” doesn’t hide Chicago’s problems. But it’s a complicated mural of civic life that lets its subjects speak for themselves and resists reducing their concerns to bumper stickers.

The documentary picks up in 2018 as Rahm Emanuel announces that he will not seek re-election as mayor the following year. The city is troubled by crime and roiled by protests over the police murder of a Black teenager, Laquan McDonald. It’s time for a change in Chicago. But what kind?

James captures the competing arguments and constituencies by tagging along with an assortment of Democratic primary candidates. Some campaigns get more attention than others, presumably a function of access and James’s interests. We spend little time with William M. Daley, the presumed centrist successor to Emanuel, who ends up failing to make the runoff.

Instead, James is drawn to outsiders and mold breakers. He spends considerable time with Willie Wilson, a Black businessman who voted for Donald Trump in 2016, and Amara Enyia, a progressive activist and the daughter of Nigerian immigrants, who secures a key endorsement from Chance the Rapper. (An Enyia event with Chance and Kanye West, whose support of President Trump becomes cause for concern, is one of the few places where national politics directly enter the story.)

Not all of the subjects are major contenders, but each tells a piece of the story of a city being pulled in different directions. Neal Sáles-Griffin, a nonprofit entrepreneur who barely made the ballot, makes up for his lack of political muscle with idealistic zeal. Garry McCarthy, the former police chief terminated after the McDonald shooting, voices the resentments of white Chicagoans alienated by Black Lives Matter protests.

But the real subjects of “City So Real” (a title borrowed from an Alex Kotlowitz book that itself paraphrases a Nelson Algren line) are Chicago’s neighborhoods and people. Each segment begins with the neighborhood identified on a city map, a helpful guide to the outsider but also a thematic statement. Chicago, as the series finds it, is a confederation of enclaves, distinguished by economics, ethnicity and culture.

And the campaign, in the camera’s eye, plays out not just in debate halls but in laundromats and barbershops. It’s an extension of the battles and worries of life. We visit anti-gentrification protests, then hear Arturo Garza, a developer and landlord in the Pilsen neighborhood, dismiss people “salty” about money coming into their neighborhoods. “Hey, you rented,” he says. “You didn’t buy. You had a chance. Guess what? You gotta leave now.”

Politics is not an abstraction for “City So Real”; it’s about where and how you live.

The program has a particular taste for the ground-level, person-to-person, sweat-and-blood dimension of the election. It spends a long time on the ballot qualification stage, where signature challengers get angry and level personal insults — “ambulance chaser,” “snake.” It’s dramatic, but it also represents the film’s worldview: Every ballot, every name on a petition, is a little war.

The eventual winner, Lori Lightfoot (the city’s first openly gay mayor and its first Black female mayor), gets relatively little attention early on; the series seems to discover her as the electorate does. With a late surge, she places first in the primary, then easily wins the runoff, which the series dispenses with quickly.

And there the story might have ended, except that 2020 happened. “City So Real” screened at film festivals as a four-part series. James went back this year to add a final episode that picks up in March, as the pandemic strikes the city.

The fifth hour opens with striking shots of majestic, empty streets after four hours that were so bustling with fractious life. The pandemic was another ton of bricks dropped on a city whose big shoulders were already fully loaded. Then came the spring and summer’s racial-justice protests, which both challenged the city’s unity and sense of safety and also gave a practical focus to the progressive spirit of the 2019 campaign.

A final episode that might have seemed like a postscript instead brings the series’s threads together. The year 2020, in Chicago as elsewhere, proves that elections are not theoretical exercises or theater. The challenges, anticipated and out-of-nowhere, are what all that campaigning was about.

Enyia and Sáles-Griffin find new applications for their activism. The talk in a barbershop frequented by ex-police, which we saw earlier in the series, becomes more bitter and hostile; the new mayor, elected as a progressive, has activists protesting at her house. The image of the city’s downtown drawbridges, raised to guard the downtown against property destruction, is a stark symbol of the city’s neighborhoods as side-by-side fiefs and islands.

But while “City So Real” ends on a plangent note, it also highlights the indomitability of the city and its voices. Its subject, Chicago, is a difficult star, but it’s one you can’t help rooting for.

Helen Lachs Ginsburg, Who Saw a Living Wage as a Right, Dies at 91