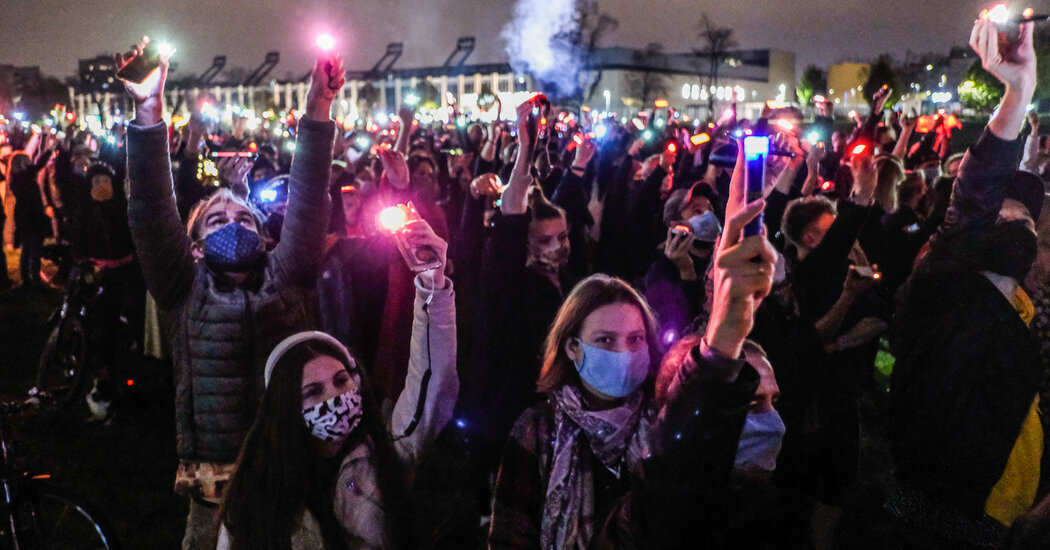 The move came after two weeks of protests that were the most intense in the country since the 1989 collapse of communism.

Outraged by a court decision that effectively banned nearly all abortions in Poland, thousands of people took to the streets.Credit…Omar Marques/Getty Images

BRUSSELS — Poland’s right-wing government has delayed implementation of a court ruling that would impose a near-total ban on abortions after two weeks of the largest protests the country has experienced since the 1989 collapse of communism.

The country already had one of Europe’s most restrictive abortion laws before its Constitutional Tribunal ruled on Oct. 22 that terminating pregnancies for fetal abnormalities — one of three justifications for legal abortions and virtually the only type performed in the country — violated the Constitution.

On Tuesday, the government indefinitely delayed the publication of the court’s ruling, which prevents it from going into legal force, in an apparent response to the protests. For the change to take effect under ordinary procedures, the government would have had to publish the ruling in a government journal by Nov. 2.

The government could still publish the decision at any time, as it has done with other controversial rulings, even though legal experts say that would violate the Constitution.

“A discussion is ongoing,” said Michal Dworczyk, the head of the prime minister’s office. “In this situation, which is difficult and causes a lot of emotions, it is good to give ourselves a bit of time for dialogue and for working out a new position.”

Ewa Letowska, a law professor at the Polish Academy of Sciences and a former judge at the Constitutional Tribunal, the country’s highest court, said the government’s delay was illegal.

“The publication of the tribunal’s rulings is mandatory,” she said. “Although there were objections to the ruling, some of them legitimate, delaying the publication is unconstitutional.”

Before the Constitutional Tribunal’s decision, Poland allowed terminations of pregnancies in three instances: in cases of fetal abnormalities, a threat to a woman’s health, and incest or rape.

In practice, most legal abortions — 1,074 of 1,100 performed in the country last year — resulted from fetal abnormalities. Yet those abortions represent only a small fraction of those obtained by Polish women, who seek terminations abroad or undergo risky illegal procedures.

The court’s Oct. 22 ruling ignited a furor on the streets of Poland. Ignoring Covid-19 restrictions amid skyrocketing new coronavirus cases, hundreds of thousands turned out, holding banners that read “I wish I could abort my government” and “This is war.”

Poland already had some of the severest restrictions on abortion before the new ruling.Credit…Maciek Nabrdalik for The New York Times

The demonstrations across the predominantly Roman Catholic country also reflected a broader anger at the governing party over the erosion of democracy and other grievances, including its handling of the pandemic.

Critics accuse the government of circumventing Parliament to introduce the effective ban on abortion. They say the tribunal is under the thumb of the governing party, which appointed 14 out of 15 of its judges.

The government, led by the Law and Justice party, has also been accused by experts and the European Union of taking control of the judiciary. The court’s president, Julia Przylebska, is a long-term friend of Jaroslaw Kaczynski, the party’s chairman and Poland’s most important politician.

Some protesters disrupted church services and confronted priests, challenging the Catholic Church, which holds a special place in Poland’s society after supporting the struggle against communism. The church is a close ally of the governing party.

Last week Mr. Kaczynski called on his conservative supporters to “defend Poland, defend patriotism” and “defend Polish churches,” remarks that could be construed as encouraging them to clash with protesters.

“This is the only way we can win this war,” he said.

Although the demonstrations have been largely peaceful, far-right activists, mainly young men dressed in black and armed with pepper spray and flares, occasionally confronted protesters violently.

An aerial view of people in Krakow forming the Polish word for choice.Credit…Omar Marques/Getty Images

In response to the social unrest, President Andrzej Duda submitted “a proposal of changes” to Parliament that would slightly ease the restrictions that the court supported by allowing the abortion of fetuses with “lethal” abnormalities. It would still ban abortions in case of other conditions such as Down syndrome.

There is very little institutional support in Poland for families with disabled children, leaving parents to fend for themselves once the child is born.

Barbara Nowacka, an opposition lawmaker, said the government had postponed the parliament session in the face of the public outcry.

“They got scared by the protests,” she wrote on Twitter.

Analysts say the president’s proposal has slim chances of getting sufficient backing from lawmakers, since it does not satisfy the demands of either side of the debate.

A Closer Look at the Colon Condition That Hospitalized the Pope