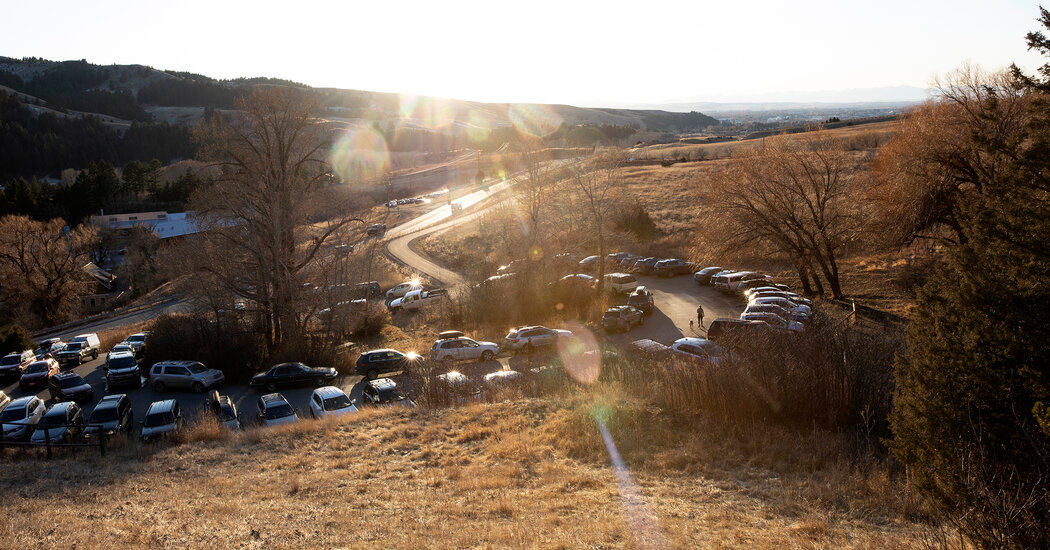 As urbanites flock to forests and rivers to escape coronavirus threats, trailheads are cramped with parked cars and fishing on the Madison River is like a Disneyland ride.

A crowded parking lot by a trail in Bozeman, Mont., on Friday.Credit…Janie Osborne for The New York Times

BOZEMAN, Mont. — The Madison River rushes down out of the snows and springs atop the Yellowstone plateau, a dark blue, rock-studded, world-class fishing stream.

The fishing season is nearly finished, but a season of discontent continues. Throughout the summer and fall, there have been traffic jams on the river, and the number of large fish has declined.

“You’re in a flotilla with five boats in front of you and five in back of you,” said Carl Hamming, a board member of a local chapter of Trout Unlimited, which wants to limit commercial guides on the river. “It seems like everyone was flocking to Montana this summer,” he said.

Some say floating the jammed river feels like the Pirates of the Caribbean ride at Disneyland; a writer in a Montana wilderness journal recently coined another name for it: “Rivergeddon.”

After a series of contentious meetings, the Montana Department of Fish, Wildlife and Parks on Wednesday approved a series of measures to ease the impacts of crowds on the Madison River, including a cap on the number of guided fishing and rafting trips, though critics say the changes will not do much.

The phenomenon of gridlock in a natural paradise has been seen across the West for years. But in Montana it has accelerated markedly this year, fueled by urbanites fleeing the pandemic. Now, many residents are concerned that the state that calls itself the Last Best Place has bragged a little too loudly and too often.

Much of the ire is focused in Bozeman and environs, some 80 miles north of Yellowstone National Park. Once a small college and ranching town, the last couple of decades have seen it explode with people who have come for the fishing, hiking, skiing and other outdoor amenities. The city, which has about 50,000 residents now, is forecast to add another 27,000 people by 2045 and far more if surrounding areas are taken into account.

Housing prices have soared, especially this year, driven by Covid-19 refugees who sometimes buy a home without seeing it. In one month this summer, the median home price jumped by $88,000 to $584,000 — in a city where the average annual wage is about $48,000. Home prices jumped another $35,000 just last month. Even as the Tyvek and two-by-fours of new construction have become ubiquitous, many local residents say they are getting priced out of the market. 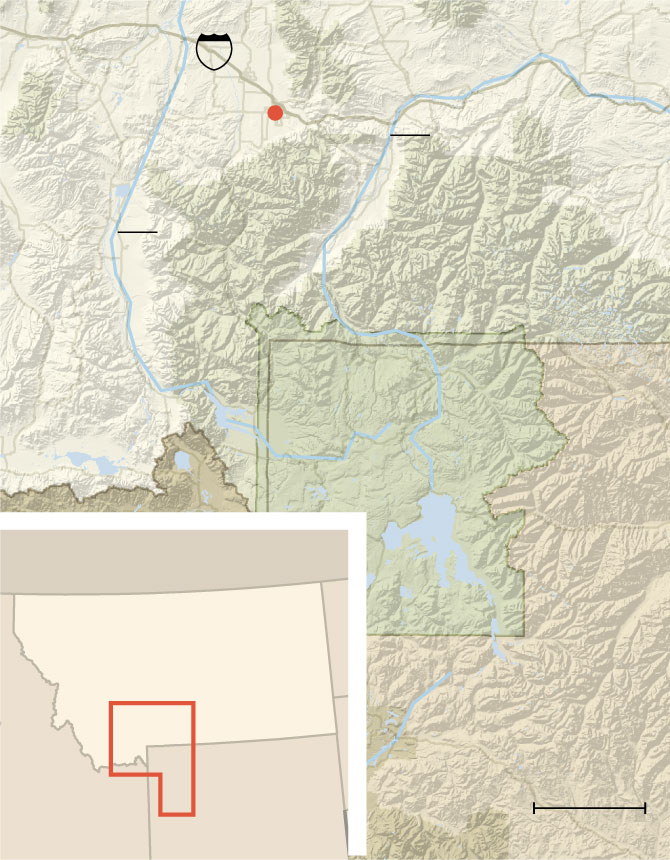 The situation has been worsened by the proliferation of short-term rentals to satisfy demand created by out-of-town visitors.

“The pandemic has exacerbated it,” said Bozeman’s mayor, Cyndy Andrus. “We’ve been growing a lot, but it took off this year. They are fleeing big urban areas for the amenities.”

For some residents the biggest blow is the whittling away of their “psychic income.” Many people are willing to make less money in exchange for living in a wild place with uncrowded hiking, fishing and skiing.

That equation has changed dramatically this year, as people flee confinement for the great outdoors — and that includes both new transplants from coronavirus hot spots and local residents who are opting to spend more time outdoors during the pandemic.

Image The Madison River near Bozeman on Sunday. After a series of contentious meetings, the Montana Department of Fish, Wildlife and Parks on Wednesday approved a series of measures to ease the impacts of crowds on the river. Credit…Janie Osborne for The New York Times

Yellowstone Park did not fully open until June 1 because of the coronavirus, and much of the park’s lodging was closed, but August was the second busiest on record. September and October saw record crowds for those months.

Meanwhile, many residents complain of crowds swarming at trailhead parking lots, camping along roads in national forests, and overloading rivers and fly fishing spots. “This is the No. 1 topic of discussion,” said Dennis Glick, the director of a Bozeman nonprofit group called Future West, which helps communities with sustainable planning. “Everybody is complaining about how crowded campgrounds and trails are.”

At Bangtail Bike and Ski, a mountain bike and Nordic skiing store, sales are through the roof. “I sold five times the number of cross-country skis in September and October this year as last year,” said Robert Funderburk, the manager. He said that a shortage of skis and mountain bikes nationally has prompted people to come in and “panic buy” their outdoor gear. “I call it the toilet paper effect. People know there is a shortage and they just buy it.”

But the cramping of recreational pursuits is just one dimension. The Greater Yellowstone ecosystem, which takes in more than 34,000 square miles of wildland around Yellowstone National Park and includes the cities of Bozeman and Jackson, Wyo., is considered the largest nearly intact temperate ecosystem in the world.

It is one of the few places in the continental United States where landscape-level ecological processes can play out, including wolf packs hunting elk and deer, long-distance wildlife migrations and wildfires that can be left to burn in order to rejuvenate the natural landscape.

Robert Funderburk, business manager for Bangtail Bike and Ski, a mountain bike and Nordic skiing store in Bozeman. Store sales have increased since the start of the pandemic.Credit…Janie Osborne for The New York Times

But the mounting human population, exacerbated by the pandemic but increasing over a period of years, has threatened all of those natural processes. “We are going to lose the greatest wildlife-rich ecosystem remaining unless we chart an alternative path,” said Todd Wilkinson, editor of Mountain Journal, an online magazine that has warned of poorly managed growth and the arrival of “Rivergeddon.”

“Other places like this no longer have wildlife because the landscape has been so fragmented,” Mr. Wilkinson said.

Snowmobiles and backcountry skiing are encroaching into the denning areas of wolverines. A recent study in British Columbia found that the presence of people in wildlife habitat, especially those on mountain bikes and off-road vehicles, can force animals to flee important feeding areas.

The Madison River provides a case in point for the steady escalation of recreational traffic to what was once a pristine river.

That has led to parking lots filled with truck and boat trailers and lots of trash on the riverbanks.

“I’ve never seen anything like it,” said Kirk Deeter, a former guide and head of communications for Trout Unlimited in Steamboat Springs, Colo., another outdoor destination that has experienced similar growth during the pandemic. “With no T-ball leagues or theaters or malls, people found the rivers and lakes in droves. It’s a circus out there.”

A trail parking lot in Bozeman on Saturday. The city, which has about 50,000 residents now, is forecast to grow by 27,000 people by 2045.Credit…Janie Osborne for The New York Times

The environmental damage already is obvious, he said. “The rivers are getting the living snot pounded out of them every day.”

Montana has seen an average of 1,232 new coronavirus cases a day over the past week, an increase of 40 percent over the previous two weeks, and many longtime residents have blamed the newcomers for bringing the virus with them — though Gov. Steve Bullock has said there is no evidence of that.

And the push to make way for newcomers goes on.

Mr. Glick, the advocate for sustainable planning, said that tourism and the growth of real estate, tech and service industries have been promoted as better alternatives to the damaging effects of mining and logging, Montana’s former mainstays. But they need to be studied and carefully managed, which is not now the case, he said.

“Conservationists touted recreation as the benign alternative to resource extractions,” he said. “It’s a tough pill to swallow that the alternative they have been promoting has become a significant environmental issue.”

Ms. Andrus, the Bozeman mayor, said it “may be time to dial down the tourism promotion” and reallocate some of the money to compensate for the impacts of a large number of visitors. But shutting the door is not the solution, she said.

“Closing the state down to visitors is not practical; even if it was, I don’t believe it is a good idea,” she said. “You cannot put that genie back in the bottle.”

Residences in Bozeman on Wednesday.Credit…Janie Osborne for The New York TimesContinue reading the main story

Extinction Watch: Amur Leopard, only 100 in the wild

The Wedding Is Postponed. Again.