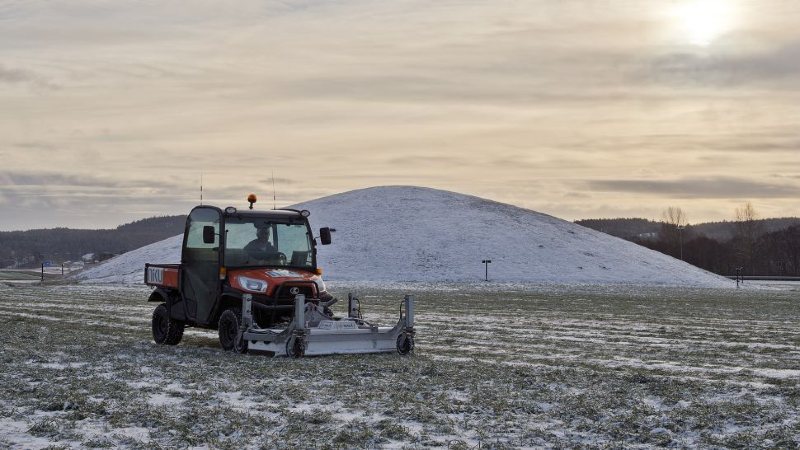 The area surrounding the Gjellestad Viking ship burial in Norway was found to contain an extensive and traditional funerary, feasting, and religious complex of outstanding significance, ground-penetrating radar scans revealed.

The finds transform the understanding of the site as one containing an isolated grave to representing the regional center of Viking high-society.

Remains of three longhouses, a feasting hall, 13 smaller burial mounds, and a temple were all identified sitting in the field around the Jell Mound, the second-largest known funerary earthen mound in Norway, and one that was first used as a high-society burial site in 550 CE, around the fall of the Western Roman Empire.

Together they form a hitherto unknown “central place,” sites which Scandinavian archaeologists classify as places of great importance to the pre-Christian denizens of the peninsula.

Excavations, both academic and amateur, of the Jell Mound and surrounding areas have yielded high value goods, many of which are now on display in Norwegian museums and which include weapons and jeweled personal items.

The researchers suggest that, as can be observed in other burial or political traditions in cultures and nations of the past, tying one’s political or cultural authority to older traditions or places/persons of authority was a strong way of consolidating power.

“We believe that the inclusion of a ship burial in what was probably an already existing—and long-lived—mound cemetery was an effort to associate oneself with an already existing power structure,” said Lars Gustavsen, the lead author of the research paper on the site’s additional structures and mounds.

“Indicative of the emergence of a central place in a time when control of the land was in flux, Gjellestad’s relevance as a political arena was retained and reinforced with the addition of a ship burial—the ultimate expression of status, wealth and connection in Iron Age Scandinavia,” reads the paper.

The discovery of a partially-intact ship burial is about as good as it gets in European archaeology, and the Viking Ship Museum in Oslo is home to the only three ever excavated, all discovered in the 1800s.

The Gjellestad ship, discovered in the autumn of 2018, is the first one to be excavated in over 100 years, and was discovered in a field in southern Norway near the border with Sweden in Østfold county by archaeologists from the Norwegian Institute of Cultural Heritage Research. It was buried 1,200 years ago, about a decade after the Viking Age exploded into violent life with the raid on the English Monastery at Lindisfarne in 793CE.

“For the first time in 100 years, we will now excavate a Viking ship. We are very excited about the result,” Sveinung Rotevatn, Norway’s Minister for Climate and Environment told state broadcaster NRK. “It is urgent that we get this ship out of the ground.”

The urgency comes from a fungal growth that is rapidly decaying the wood of the ship. $1.5 million was granted by the government for excavation of the Gjellestad last year.

In the mid-20th century, according to Smithsonian, farmers unknowingly built a drainage pipe over the boat’s resting place in the middle of their field. Air leaked down into the soil and allowed a destructive fungus to proliferate and eat away some of the boat which wasn’t already destroyed by both time, and the unfortunate discovery by locals in centuries past.

If the excavation is quick and clean, historians may be able to divine what kind of ship it is, as the Vikings used different ships for trading, raiding, and transport. Measuring 60-feet long, it’s not the smallest ship style built during the Viking Age, but also by no means the biggest, as the famous Gokstad and Oseberg ships are about 18 and 10 feet longer respectively.

(WATCH the NIKU video about the Gjellestad Viking ship discovery below.)

Winter ends on Everest without an ascent – ​Avalanche

Countries group into clusters as COVID-19 outbreak spreads: Research reveals ‘an astonishing explosion of COVID-19’ in Italy, US from cases to deaths

Howling With Joy: After 45 Years, the Gray Wolf Has Successfully Been Lifted Off the US Endangered Species List