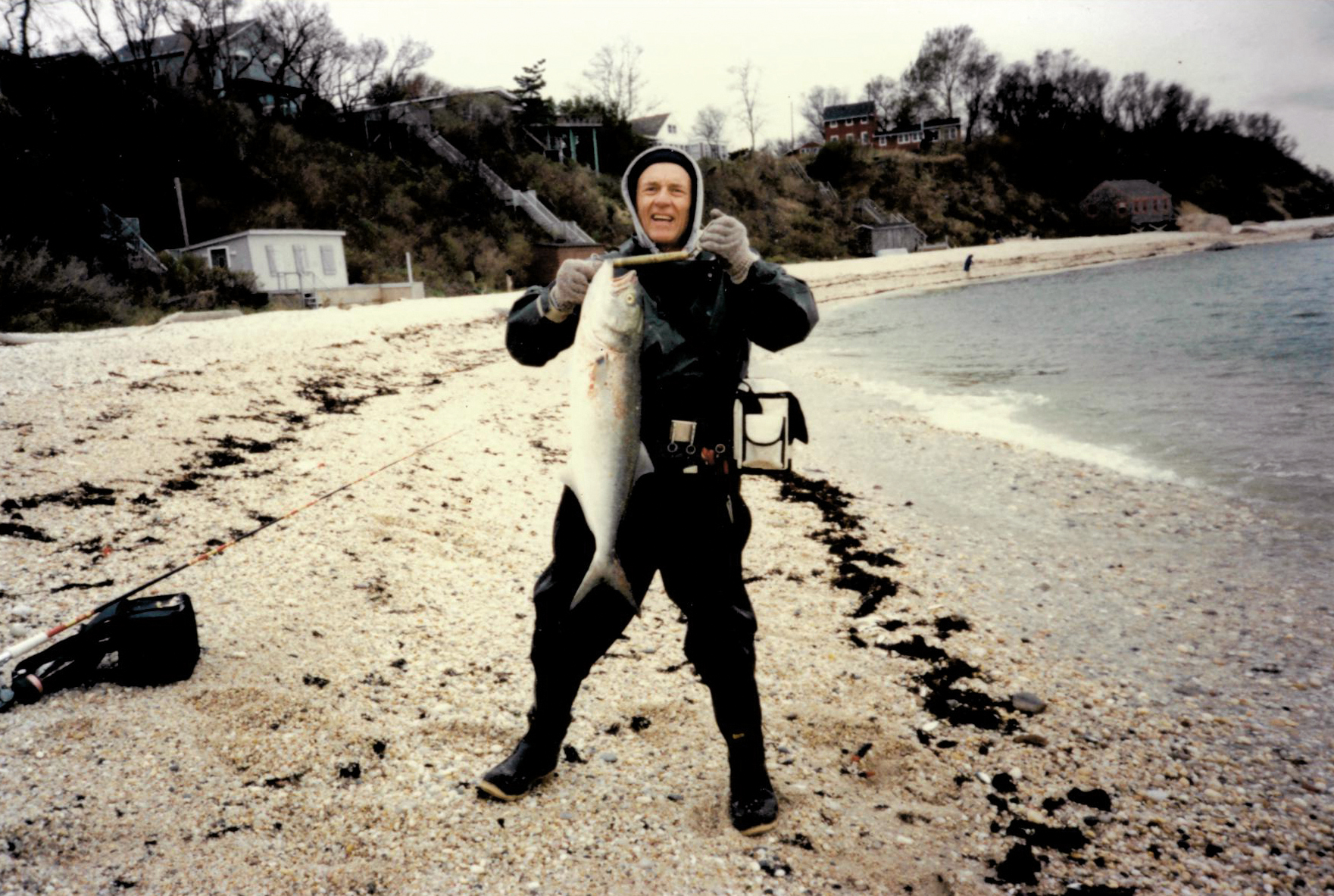 There were three magical decades for giant bluefish, and some argue that the ’70s was the best of the three. Maybe so, but for me the opportunity to catch truly immense blues in the surf from May through November was special in all three decades. During those times, the striper population was in freefall and chances to catch big weakfish (although good) were primarily restricted to May and June. How fortunate that the bluefish population was at peak size. For those of you who didn’t fish back then, let me offer a perspective. Although 10-and-12 pound blues are admired as large in size today, back in the 1970s, no one blinked unless a blue exceeded 14-pounds. There’s no doubt that our perspective is always relative to the average size available. Yet, amid all those great days, there was still room for a special once-in-a-lifetime experience.

Fall fishing in 1977 was similar to other autumn runs back then—we caught big blues on the North Shore, the South Shore, and in the inlets and harbors, too. Blitzes were common, and everyone was catching 17- to 18-pound blues. Sadly, some anglers took the runs for granted since big blues were so common that interest waned at times. In autumn especially, I often heard surf anglers say, “I’m bluefished-out!”

Autumn 1977 was cold, but that didn’t bother big blues. While smaller blues moved on when water temperatures fell to about 48 degrees, large blues feed in water as cold as 43 or 44 degrees. And, because many of the blues that year were 15-to-20 pounds, many of them remained in New York through November.

My mentors instructed me in many facets of surf fishing, and one facet was the standard for a trophy fish. I guess these traditional standards have been shaved in the new millennium, but in my younger days, a trophy striper was 50 pounds, a trophy weakfish was 12 pounds, and a trophy bluefish was 15 pounds. Furthermore, these fish had to be caught on a lure and not bait! A weakfish over 13 pounds was already on my wall and, in 1977, a 50-pound striper was still more of a pipe dream for me than a realistic quest. So, I focused on bluefish since they were abundant, large, and widespread. Oddly, in spite of that, I couldn’t seem to snag a 15-pound specimen. Others caught 16, 17, 18, and 19-pound blues, so what was wrong with me? Was it my approach? Was I just not skilled enough?

Then, on a bitter cold and windy October night as I fished along a favorite shore, I questioned why I was on that beach and not warm in my bed. I had no hits or fish, and I was about to surrender when I had a hit, sunk the hook, and it became clear I was into a big blue. I can usually tell a blue from a striped bass since striper runs are powerful but not as fast, and the head shakes are slow and wide. Blues, on the other hand, run faster and the head shakes are typically rat-a-tat-tat. I landed that fish, and it weighed 15-pounds, 8-ounces, and I delivered it to the taxidermist the next morning.

Bluefish have a sharp set of teeth used to slice baitfish.

I don’t know about you, but it seems to me that my first success at a quest is hard to come by, but once achieved, the flood gates open. For example, I stared at clear night skies for years with the hope of seeing a shooting star. Then, one night I saw one. Beautiful! After that I saw thousands—amazing! Well, less than a week, later I caught a 16-pound, 4-ounce blue and exchanged it with the one at the taxidermist. Several days later, I caught a 17-pound blue, then an 18, and a 19-pound fish. The 19-pound bluefish stayed at the taxidermist until November 7, 1977.

Horton’s Point is not so much a point as it is a right turn. Water fills the cove between Goldsmith’s Inlet and McCabe’s Beach on the flood, then turns east on the ebb. Since the shoreline gradually angles to the northeast before turning east, the ebb tide current accelerates as it approaches the point. Two-thirds of the way from the lot to the point, there is a trough within an easy cast of the shore. The bottom is shallower at the point and there are gigantic and erratic glacial boulders strewn through the zone, and a shoal causes water to accelerate.

This structure is an invitation to predators. Baitfish take the path of least resistance and go with the flow toward the east. As the current increases, bait is first funneled into the trough and then up and across the even faster rip at the point. Gamefish can move easily out of the depths and attack them. I usually fish the beach by starting east of the lot, making a few casts every hundred feet or so. I do this because I have often found fish west of the point and because when the bite is on, there is almost always a queue of anglers rubbing elbows at the point.

My friends and I moved our surf safaris from South Shore spots to the North Fork by the last week in October 1977. Yes, we caught big blues on every North Fork trip, and any blitzes were either short or well off the beach. Happy as we were picking away at huge blues, no one could anticipate what would happen in early November.

Typical of prolonged blitzes, many factors must come together to make them happen. Obviously, there must be a lot of big baits to hold large fish, and there needs to be plenty of big fish in the area to keep the blitz going. There also must be the right physical conditions (tides, moons, and weather), as well as the right topography that allows the bait to be pinned against the beach. Prolonged blitzes may not happen often, but when one does, it nurtures dreams for a lifetime.

It was dawn on Tuesday, November 7, 1977, and anglers from every surf-fishing club on Long Island were spreading out along McCabe’s Beach and catching bluefish. I was a member of The High Hill Striper Club then. I knew the anglers, except for the locals. I was bracketed by Fred Schwab of High Hill on one side and John Fritz of the Farragut Striper Club on the other; both frequent fishing companions and terrific surf-fishermen.

Dawn brought a steady pick of fish from 12-to-14 pounds, but when the flood tide reached its highest point, the action stopped. Frankly, most of us thought that was it for the day, but some of us remained in the lot exchanging stories, laughing, and drinking coffee. Belonging to a surf-fishing club creates a camaraderie, fostering profound memories of shared experiences. Furthermore, when all the anglers around you are talented and experienced, fishing becomes more like a choreographed ballet than a sport.

These are some of my best memories. The choreography functions so well when the anglers are skilled, respectful, and courteous.

The changing weather contributed to a sense that there would be no fish on the ebb. The wind, a mere whisper at dawn, was building to a gale out of the northeast, and clouds thickened and spit rain. Nonetheless, some die-hard anglers began wandering back to the beach on the ebb for a few casts.

Large bluefish were the “norm” in the autumn of ’77.

I remained at my vehicle to sharpen hooks, retie, and exchange a few plugs. I glanced to the east and saw a rod bend, causing me to funnel into my surf top and hurry east. The anglers were avoiding the beach 200-yards west of the point because freshening winds were generating huge waves that wrapped around the point and swept into the oncoming rip. I walked until I was the last in line, and once again found myself fishing next to Fred and John.

I set myself, put on a 3 ½-ounce Gibbs pencil popper, and made a side-armed cast, trying to keep the plug under the wind and right above the waves.

Submit your fish photos using the Instagram hashtag #OnTheWaterMagazine, or email them to feedback@onthewater.com.

We picked big fish for an hour or so, and the wind kept increasing. Then, suddenly, the steady pick turned into an all-out blitz. I looked around and saw nothing but white water as waves crashed over one another and giant blues vaulted out of the water, chasing herring and plugs alike. Bent rods were everywhere. This was a mega-blitz and every angler caught 15 to 20 giant fish—which raises a question…I’ve met anglers who insist they have caught, landed, and released 50 or more big blues in a single session, but my experiences tell me that they are either liars, the blues they caught were small, or they used a net! It takes time to wrangle, land, unhook, and release big blues. And, blues being the wild beasts they are, sometimes spin themselves off a hook, bite through leaders, and wreck lures. That equates to additional time to tie on new leaders, replace lures, bend hooks back into usable shape, and just a minute or two between fish to breathe and let your muscles ease. For most of the tide that day the action was continuous, but no one landed more than 20 fish.

Interestingly, the anglers on the east end of the line, where rip met waves and the water was chaotic, caught the bigger fish. I, for example, landed and released 15 blues in the blitz from 16-to-21 pounds. I was totally spent, and grateful when the bite died. These fish were fat, and this was especially true of the 21-pound fish I caught. I faced both John and Fred as I weighed it with the fish’s back pointed in their direction. John Fritz exclaimed; “Hey, Doc’s got a bass!” Of course, it wasn’t a bass, but the fact that John thought it was speaks to how thick those fish were.

I routinely take rough measurements of fish I catch by holding them up against marks on my rod to make detailed notations in my log. That day, the measurements astounded me. The smallest fish I caught that day was at dawn and weighed 14-pounds while measuring and 34 inches. The largest fish at 21 pounds measured 38 inches. The 34-inch fish was average in thickness, but the other fish I caught on the ebb tide were fat and wide. So, the disparity in weight was not matched by a disparity in length, a very interesting phenomenon.

I’ve been fortunate to enjoy many blitzes of weakfish, stripers, and blues, and I’ve come to realize that the impact of a blitz is not only measured by the number of fish caught, but also by size, conditions, camaraderie, the attitude of the fish, and how long the blitz lasts. When I think about all these factors, I have to tell you that this was the best blitz of my angling life!

How to Gather Oysters (Tools & Tips)

Striper Fishermen, Time to Speak Up