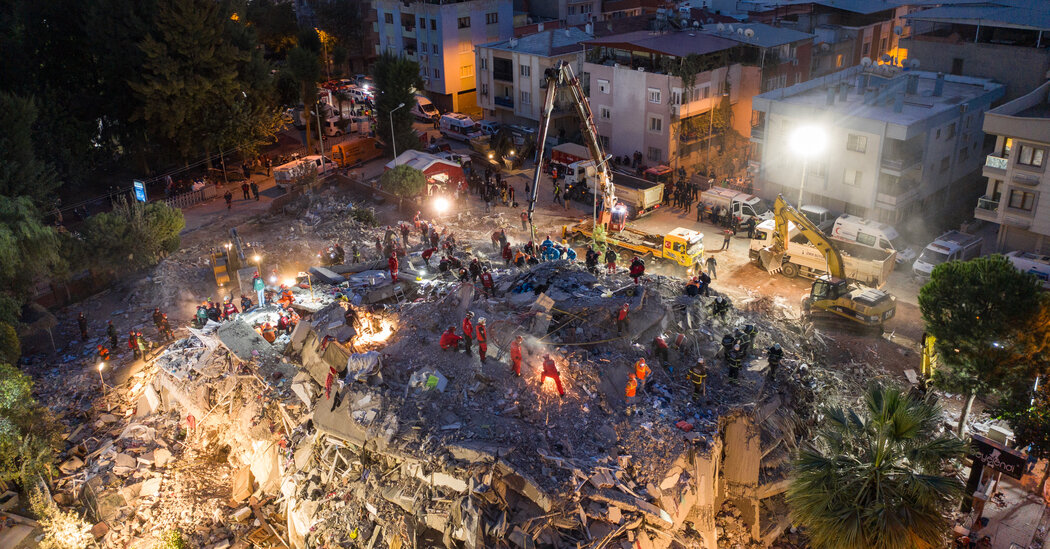 The magnitude-7.0 quake that struck in the Aegean Sea also killed at least two people in Greece. Hundreds were injured in Turkey and many thousands displaced. 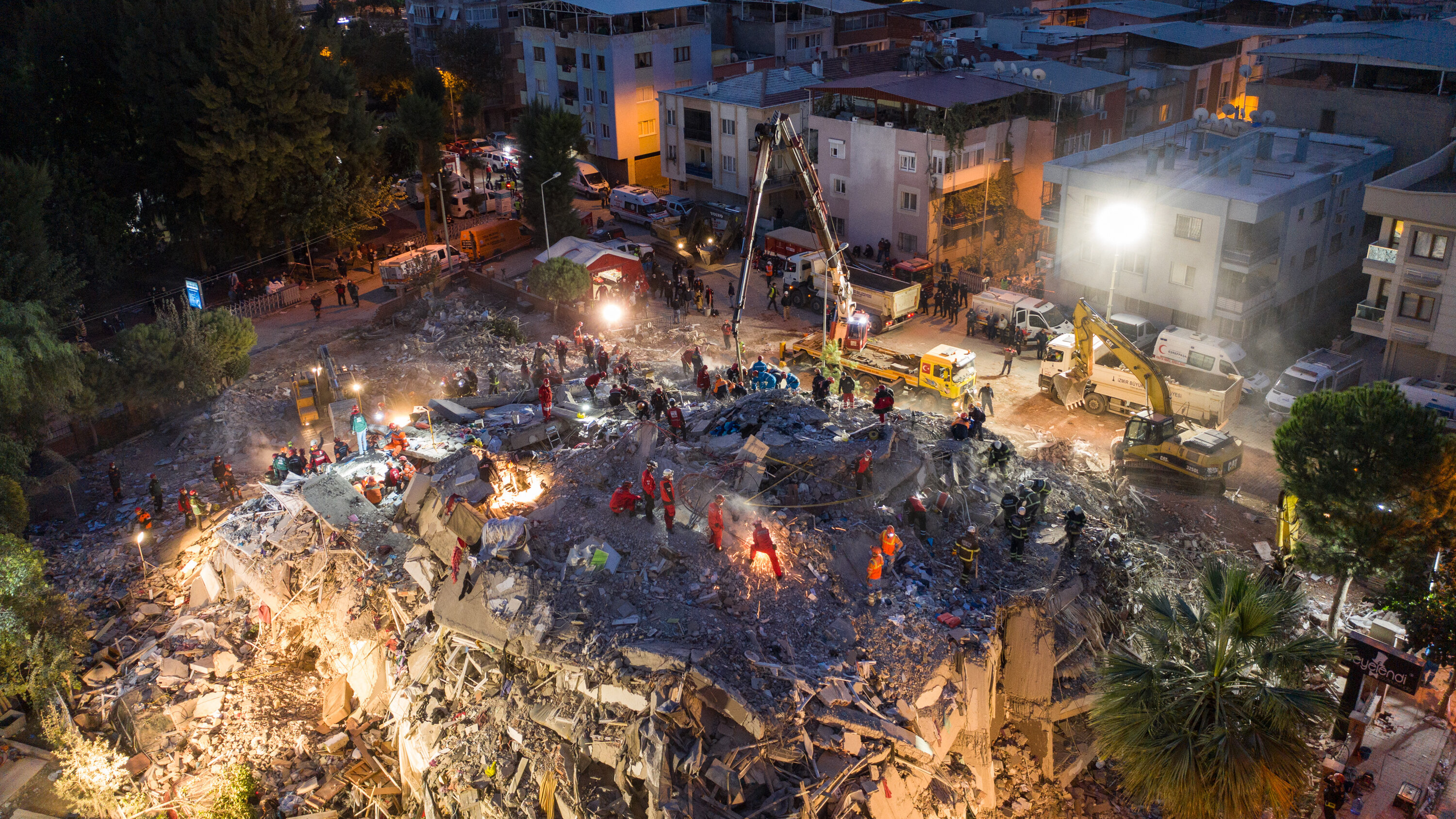 A magnitude-7.0 quake that struck in the Aegean Sea also killed at least two people in Greece. Hundreds in Turkey were injured and many thousands displaced.CreditCredit…Burak Kara/Getty Images

By The New York Times

After a day of dramatic rescues, residents in the Turkish city of Izmir clung to hope Saturday night that survivors might still be found in the devastation of the magnitude-7.0 earthquake that killed at least 39 people in Turkey and Greece, injured more than 800 and leveled numerous residential buildings.

“The building is flattened, but I survived,” Oguz Demirkapi, a technology manager who had been rescued from the rubble of his apartment building, said in a video message posted from his hospital bed. He described being pulled from beneath 12 feet of debris.

In all, President Recep Tayyip Erdogan said late Saturday, more than 100 people had been extracted from the debris of buildings flattened by the Friday afternoon quake, which was centered in the Aegean Sea off Samos, a Greek island near Turkey’s coast.

“We are receiving miraculous news,” Tunc Soyer, the mayor of Izmir, said in a televised interview earlier in the day. Rescue teams, he said, were “working meticulously.”

Rescue efforts continued at nine sites late Saturday night, with officials saying they planned to continue around the clock. Estimates of the missing ranged as high as 180 early Saturday.

The leader of a civilian search and rescue team, Murat Boz, said in a telephone interview that the work would continue “nonstop, without a break, for 24 hours, day and night.”

“We have experienced survival at the 187th hour of a previous earthquake,” Mr. Boz added. “So if we take that as a benchmark, we are at the very beginning.”

“It is out of the question for our hope to fade,’’ he said.

Mr. Erdogan said his government would set aside 24 million Turkish lira, about $2.8 million, to help survivors pay for lodging, furniture and other goods.

In the city’s Bayrakli district alone, which took the brunt of the tremors, 17 buildings collapsed entirely, Serdar Sandal, the district’s mayor, said. He estimated that tens of thousands of people would ultimately be displaced once all the damaged buildings were accounted for.

Many who had escaped unhurt spent Friday night into Saturday morning with blankets over their shoulders, afraid to return home as a wave of aftershocks shook the city. The government said it had provided 10,000 beds and 3,000 tents for them.

‘‘It was an emotionally intense night,’’ Ozgur Ozel, a member of Parliament who represents the region, said of the hours immediately after the quake. ‘‘People waiting at the wreckage of collapsed buildings were feeling that they had a narrow escape — but minutes later they felt there was something wrong as one building was standing while the one next to it collapsed.’’

The earthquake-prone city has many older buildings that are not quake resistant.

“Today what needs to be done is being done, but the important thing is what is to be done on Monday in the cabinet meeting,’’ said Mr. Ozel, an opposition lawmaker, who criticized the government for not taking pre-emptive steps to make buildings more resistant to quakes.

The death toll in and around Izmir rose to at least 37 people on Saturday, Mr. Erdogan said. More than 243 people were being treated in hospitals, including eight in intensive care, he added. Two more people died on the Greek island of Samos.

Dramatic scenes unfolded throughout Saturday. At one apartment building, rescuers focused their efforts on saving five members of a family. After managing to open a tunnel through the rubble, they were able to talk to Seher Perincek, 38, who was trapped along with her 11-year-old twins, 7-year-old son and 3-year-old daughter, according to local news reports.

Finally, 23 hours after the quake, Ms. Perincek and two of her children were removed from the wreckage alive, as seen in pictures shared with the press by local officials. One child had died, news reports said, and rescue workers continued late into the evening in search of the fourth.

“For three hours we communicated with her,” Cem Behar, one of the rescuers who helped Ms. Perincek and her children, said in a televised interview.

“When we first entered, she was hitting the walls to identify where she was,” he added. “As we went further inside the wreckage, we were able to hear her voice, although muffled.”

A funeral for one of the victims found dead in Izmir.Credit…Yasin Akgul/Agence France-Presse — Getty Images

Joy was tempered with grief at every stop. Rescue workers pulled 20 people alive from a seven-story building in the city, but they also found 12 bodies in the structure, the news agency DHA reported.

Mr. Demirkapi, the technology manager who had been rescued, was in his third-floor apartment in the Bayrakli district, when the tremors started Friday afternoon. He ran to a corner of his apartment and curled up in fetal position, he said, as his home crumbled around him.

“They pulled me out from four meters depth — I was down there for half an hour,” Mr. Demirkapi said. “I was very, very, very lucky — especially after I saw the pictures of the building”