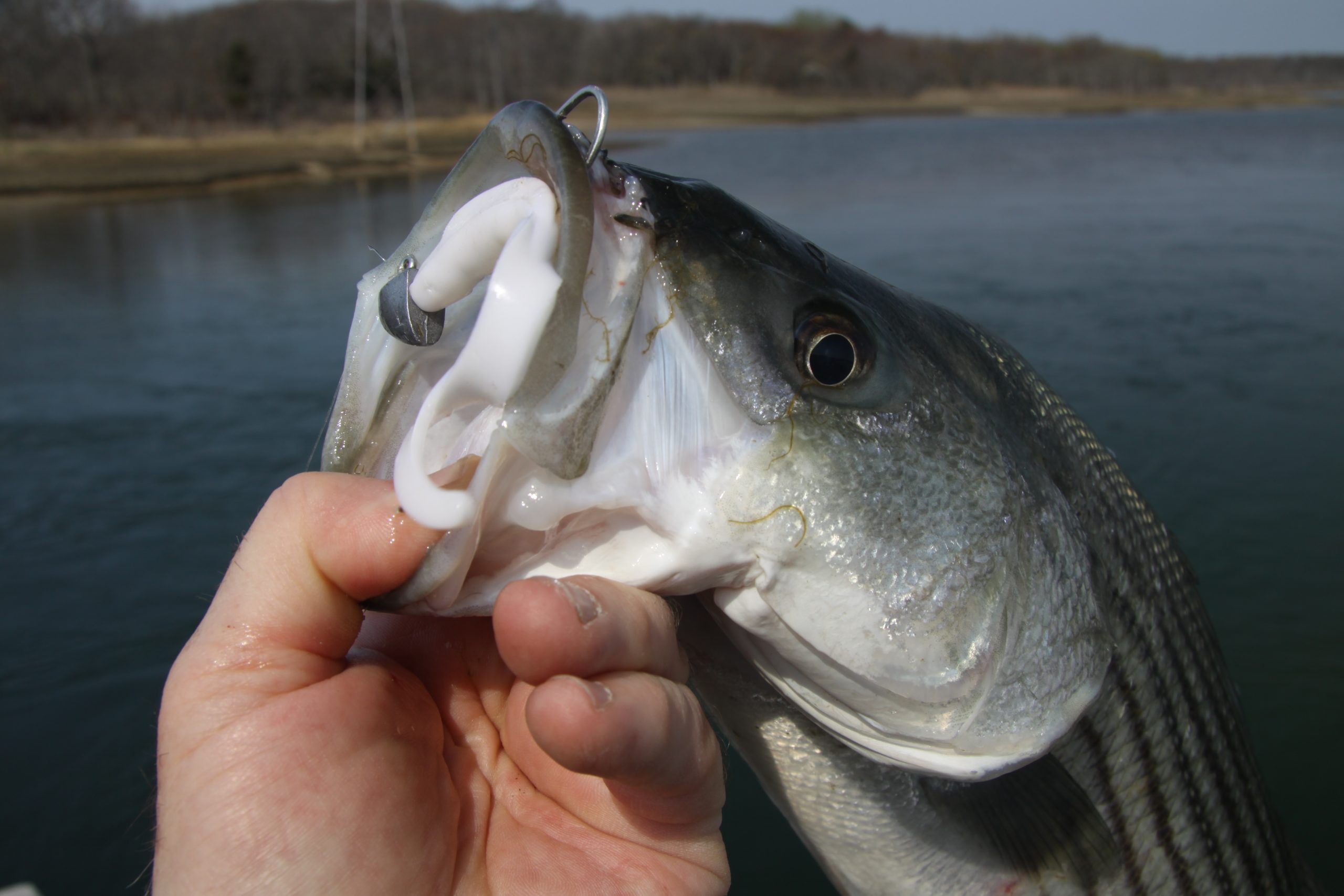 Mike Giagnacova held aloft a chunky school striper and smiled with satisfaction. “This is fun!” he stated simply, while releasing the still-rebellious juvenile linesider back into the gin-clear waters of Long Island Sound. “Days like this are what I wait for.”

Giagnacova was casting from a North Fork Long Island beach late last November and his assessment was right on the money. As they had for several days in a row, schools of 16-to-24 inch bass invaded the gentle surf in the late afternoon, showing no sign of fear toward the dozen or so anglers lining the beach. By the time the day had ended, every caster on the pebbled shoreline had scored with a dozen or more fish. One had even drilled a 30-inch keeper.

It’s no secret that fall striper fishing includes some of the best action of the year with school bass. From the Rhody coast, to the Connecticut and Long Island shores, and on down past Long Beach Island, New Jersey, late October, November, and even early December can see incredible action with these juvenile linesiders. The run is a phenomenon that has long existed, but it has grown stronger over the past three years than at any time in recent memory, with fish readily available from the beach, kayaks, or even small boats that can maneuver in skinny water. “There has been just an amazing number of schoolies coming down through here the last few years,” says Frankie DeNicola, who, like Giagnacova, frequents the beaches of eastern Long Island Sound in late October and November. “All those fish feeding tight to the beach makes for some real fireworks. Last year, my ten-year-old son, Michael, really got into the action, and now he’s hooked forever. We can’t wait for all those shorts to invade again this fall.”

Barring any unforeseen circumstances, invade they shall. Schoolies have remained in good supply in the tristate area all summer long, so the odds are we’ll see another flood of young bass swimming tight along the beaches by mid-November. With their numbers so impressive, the bite aggressive, and most fish measuring less than 2-feet in length, this late-season bassing offers the perfect opportunity to break out some light tackle, experiment with new lures and techniques, or introduce a novice to the excitement that is a surf-front frenzy no matter how big—or small—the linesiders happen to be.

Micro bass can be taken from shore, kayaks, or small boats that can negotiate shallow water.

Just before Veterans Day last year, I stopped at a Long Island North Fork beach early one Saturday morning and popped several bass to 26-inches on my standard 20-pound-test spinning setup. After lunch, I returned to the same area with my freshwater bassing gear and had a blast catching schoolies to 24-inches on 12-pound-test spinning gear and 4-inch swim shads. That same evening, I made another venture and hooked over a dozen small stripers using a 6-weight fly rod and epoxy minnows on intermediate line. The fun factor was simply off the charts with this catch-and-release action.

“It really is a blast and I absolutely love it,” says Giagnacova. “But, it’s not only all the catching that makes this fishing so enjoyable, it’s hanging out with everyone at the end of the season. This is the last hurrah for the year. It’s truly a great way to wind down the fishing and send everyone off with a great feeling of satisfaction.”

That’s not to say the schoolies in this last-pass bass fishing show up like clockwork every single day. There can be momentary gaps in the action, with little or nothing to show for your efforts over the course of two or three days. That introduces just enough uncertainty to guarantee a little anticipation as you head to the beach. Generally, however, once you dial in the fish—or they dial in you—you’ll find them in the same area for several consecutive repeats of a similar tidal stage in addition to sunrise and late-evening flurries. When the action does slack off, the question is whether to go searching or to stand your ground and wait for the fish to come through again.

Both approaches seem to work with anglers choosing their paths based more on personality than any true science. DeNicola and Giagnacova each tend to make a stand. I’m more of a wanderer and likely to work up and down the shoreline for a half-mile or more. I might even head off to another beach.

In terms of optimal tackle, bay and sound anglers will do fine with a 6½-foot to 8-foot medium-fast rod, 5000 series spinning reel, and 17- to 20-pound-test monofilament or 20- to 30-pound-test braided line. I use a KastKing Kodiak 5000 spinning reel spooled with 20-pound test braided line for most of my encounters, although I do drop down to even lighter gear after Thanksgiving because the average size of the schoolies continues to shrink below the 22-inch mark. Giagnacova’s spinning setup is similar, with a 7-foot rod and 20-pound Power Pro braid. On this, he’ll throw a ½-ounce homemade white “Smiling Bill” style bucktail tipped with pork rind.

I use white bucktails in clear water, red in slightly discolored seas, and chartreuse if the surf is roiled or clouded with heavy run-off following a storm or strong wind. For fishing the oceanside, you may need to go with a little heavier bucktail to get out past the breakers, but on calm days, 1/2-to-3/4 ounces are still the go-to sizes.

Both bucktails and swim shads can be reeled back at a medium speed with an occasional twitch. As the water continues to cool in late November and December, continue slowing down your retrieve appropriately. Plenty of school bass will also smack small poppers into mid-November. Come December, low and slow is the standard route to success and, eventually, even I switch over to bucktails to finish out the season.

“Like most anglers, I enjoy fishing for big bass, but this late-fall schoolie blitz is really enjoyable,” says DeNicola. “At the start, the bass smack lures with a lot of aggression, but as the days and nights get colder, they slow down and you need to learn how to finesse them a bit, too. It’s that mix of aggression, abundance, and the need to actually decipher the bite as the season grows late that keeps me interested. I like to throw Blue Water Bucktails most of the time. I tie on a 1/2-to-3/4 ounce white one and tip it with a white Uncle Josh split-tail trailer. That’s a deadly combination.”

[Article: How Well Do You Know Bucktails]

It sure is, and Frankie’s son knows just how to fish it: “Toss it out and reel just fast enough so that it bounces on the bottom two or three times each retrieve,” advises Michael. “If you feel any other kind of bump, strike—that’s a fish! It’s so exciting because you can catch ten, twenty, or even more some days when the fish go nuts.”

Where to hook up? That’s the least of your worries once things get started. By early November, the blues start to thin out and false albacore are pretty much gone. Whichever beaches seemed to hold them the longest are probably where the school stripers will show up first. They’ll stretch down the coast on both sides of Long Island Sound, work their way ever southward along Rhode Island, Long Island’s South Shore, and across to Sandy Hook, New Jersey, then stop to hold for a few days or even a week or two at most harbor, river or inlet mouths.

Early on, there should still be a fair number of small keepers mixed in with the schoolies. That percentage, however, drops steadily after Thanksgiving. By December, keepers have just about vanished anywhere east of Long Island’s Jones Inlet, and the sizes will continue to dwindle until the last micro bass, usually in the 12-to-14 inch class, offers a gentle kiss goodbye.

As the season grows late, schoolies also show an increasing proclivity to swarm along sandy beaches, pushing sand eels, spearing, bay anchovies, and other rain baits right into the wash. This is when you fly fishers and light-tackle anglers get your best shots. With little in the way of serious structure on these beaches, you can drop down to freshwater bassing gear and have a ball with either the long wand or an 8-to-10 pound class spinning setup.

Epoxy minnows are all you need in terms of flies. With light spinning gear, tie on a 4-foot, 12-to-15-pound-test leader and toss a 1/2-ounce SPRO or 4-inch Mr. Twister curly-tail grub on a jighead. Reel slowly, and you should connect with little difficulty. With the fish pushing bait right to your feet, you can also get away with short casts. In fact, you’ll probably do better to quarter your casts off the shoreline because bass often stack along any lip they can find.

There are no definitive start or end dates to this fall run of schoolies. It really gets underway when you notice the keepers have just about dropped out of the mix. The curtain closes when it’s either too uncomfortable to pursue the fish or the bite simply peters out. Two years ago, I was still hitting schoolies two weeks before Christmas. Last year, I gave up a little sooner.

“It really is something different, this school bass action, especially if you fish with kids,” sums up the elder DeNicola. “It’s just a good time day after day. I’m in no hurry to see the season end, but I’m also really looking forward to the micro bass invasion. There are no drag burners in those schools, but every trip is fun!”

This late-season schoolie inhaled a Panther Martin BigFin Eel Tail soft plastic. As the water gets colder in December, the gentler motion of the eel tail sometimes generates more strikes than curly-or-paddle-tail-style lures.

Of course, this being mainly a small fish game, it’s just about all catch and release after Thanksgiving. To that end, crush down the barbs on your favorite lures for faster removal, and keep a pair of long-nosed pliers on hand for backing out hooks. Wear waders or boots so you can step right in and walk any fish that seems lethargic as you prepare to let it go.

You’ll also want to dress for the weather. The water still feels warm in mid-November, but it’s surly and cold in December. Carry a set of waterproof fishing gloves, a wool knit hat for colder mornings and evenings, a rag in your pocket, and consider wearing thermal clothing if the weather forecast calls for a significant drop in temperature or an uptick in wind velocity. 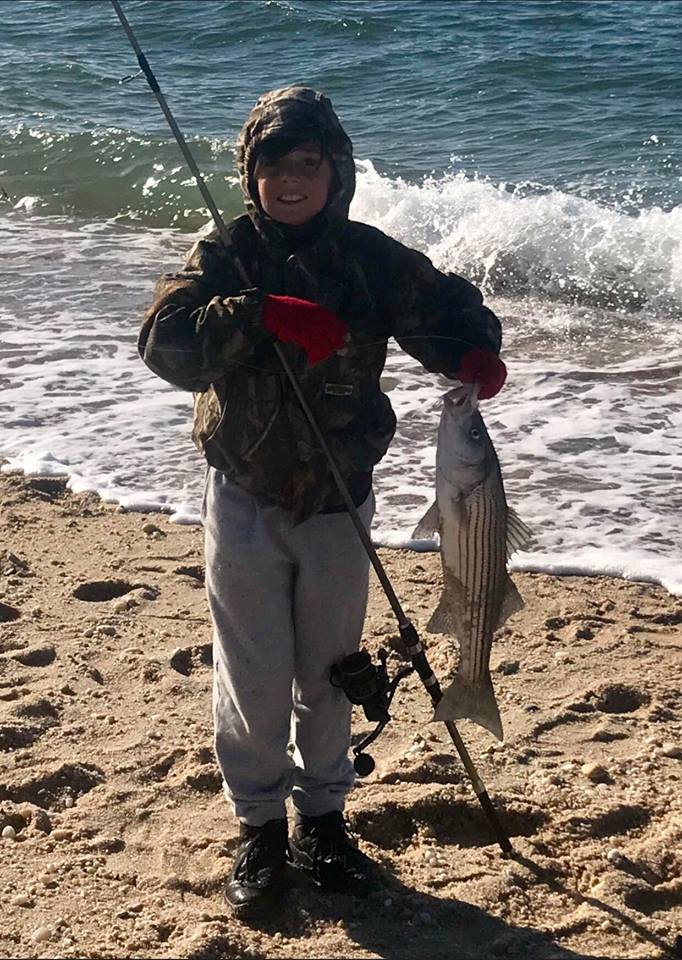 Fishing for Raritan Bay Stripers in a Small Boat