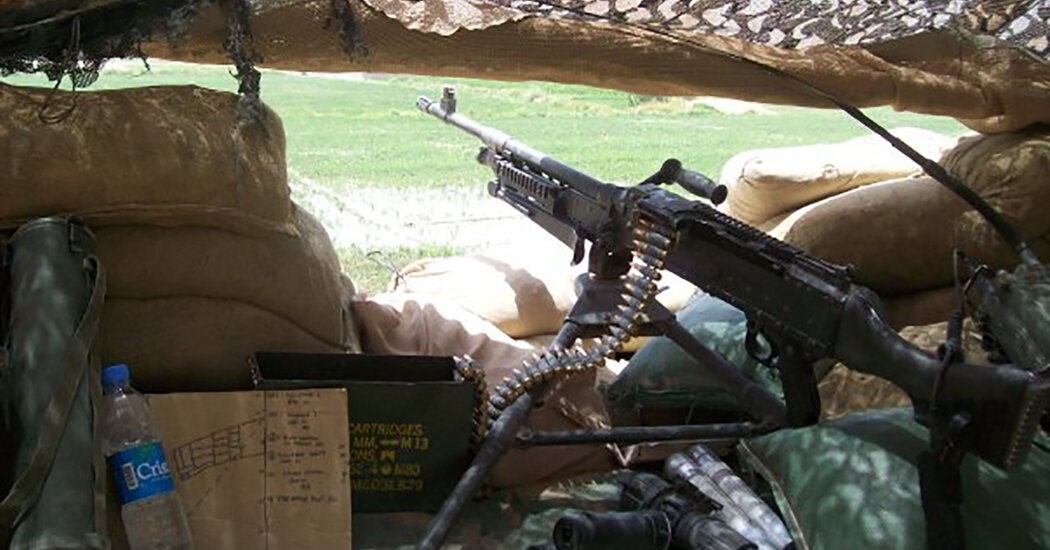 Its name was Observation Post Rock. The outpost is the backdrop for a ghost story, and is known for strange voices, radio static and the creeping fear of being watched.

KABUL, Afghanistan — It seemed the perfect vantage point for the Marines: a 30-foot-high dirt pile overlooking the low-lying poppy fields of Helmand Province. What they could not explain were the strange lights at night, the whispers in the darkness, the mysterious radio static, the sudden chill in a summer breeze and the recurring whiff of corpses.

Only later did the Marines and British soldiers stationed there begin to understand the place they called Observation Post Rock.

The post and its surrounding area were considered cursed by residents of the Amir Agha villages, an area where the Taliban insurgents now reside following the failed campaigns of the American, Afghan, Soviet and British militaries there.

The vacated outpost has cemented itself in both American and local Afghan culture as part of a legend, a peculiar intersection of history, spiritualism and the paranormal. It is the backdrop for a ghost story built along the spine of Afghanistan’s unending wars and its countless dead.

The Taliban roam freely now among the clusters of small villages and poppy fields in Helmand’s Garmsir district, all irrigated by a canal system built during the Cold War and funded by the United States.

It was different 12 years ago, when the Marines deployed in Garmsir to help drive the Taliban out. The dominant height of what the Marines described as a hardened dirt pile offered the best position for an outpost to see their enemy.

Cpl. Andrew Rouser, one of the first Marines assigned to the outpost, simply called it “the Rock.”

But before the Marines destroyed what they believed to be a Taliban defensive position on the mound with a demolition charge, Lance Cpl. Brendan Kelly discovered evidence of the hill’s ancient design: small tunnels dug into its base that led to a single chamber — maybe a fort or tomb.

Image Amir Agha bazaar in 2008 that has since been destroyed.Credit…Tyler Hicks/The New York Times

“It was creepy,” Corporal Kelly recalled.

The blast from the Marines’ explosives collapsed the tunnels.

In the months and years that passed, buried human bones were discovered in the Rock as American units rotated in and out of the outpost, and the destruction of Corporal Kelly’s discovery in 2008 morphed into part of its mystique.

An American missile had struck the outpost before the Marines had seized it, the Americans would later say, burying Taliban fighters inside.

But the bones were almost certainly not Taliban: they were decades and, likely in some cases, centuries old.

A local scholar in Garmsir, who spoke on the condition of anonymity out of fear of retribution, said the hill had originally been a fort, but that hundreds of years ago its use changed. Local people, he said, and eventually ethnic Pashtuns, saw it and the other structures like it in the area as spiritual sites and transformed them into burial sites.

In the years before the 1740s, before Pashtuns had made their way to Garmsir, is when the fort, Observation Post Rock’s foundation, is thought to have been built, according to local officials and residents.

Who built it is unclear, but the Safavid, Mughal and Ghaznavid empires, as well as Alexander the Great, all left their mark on the region. Residents of the area sometimes call these mounds (there are several in the district) a vestige of Maliko Tawafee, an Arabic phrase, also used in Persian, that describes a governing system where each tribe is led by a local king or elder.

The Rock’s last likely use as a graveyard may have been around 1980, at the start of the Soviet-Afghan war, the local scholar said, when fighters, some led by the insurgent commander, Nasim Akhundzada, surrounded and captured roughly 40 Afghan communist police officers near Amir Agha.

Mr. Akhundzada is infamous for legalizing poppy cultivation for the area in 1981 (now the primary driver of Helmand’s economy). His nephew, Sher Mohammed Akhundzada, was the governor of Helmand Province from 2001 to 2005 and was removed after international forces raided his compound and found opium there.

A group of Marines from 2nd Battalion 8th Marine Regiment relax in their living area atop Observation Post Rock in 2009.Credit…Eric Coldwell

The captured communist police, the scholar said, were taken to the top of what became known as the Rock. Mr. Akhundzada’s men and other local insurgents executed all of them. The dead were buried in the mound. Though family members came and disinterred some of the bodies, many remained entombed within the elevated earth. Local officials dispute this event, saying Mr. Akhundzada was not in Garmsir when the communists were present.

It would take only a few months after the Rock’s construction in 2008, when the Marines left and British troops took their place, only to be replaced by Marines again, that it would come to be known as the haunted outpost.

“It is a conduit” for paranormal activity, said Jose Herrera, then a lance corporal and one of the Marines that had spent time at the Rock in 2009. When he was there, Mr. Herrera said he saw mysterious lights, heard strange static on the radio and had the creeping feeling, much like several Marines who had spent time there, that someone, or something, was watching them.

Locals would often tell the Marines on the Rock that the area was haunted.

“The smells were like something was dying,” said Corporal Herrera, who has since left the Marine Corps. “It was really bad at night. And it was like it came in whiffs or gusts.”

Tom Coghlan, a former journalist for the London Times, wrote about a group of Marines at the Rock in the summer of 2009 battling much of the same seemingly paranormal issues described by Mr. Herrera: drastic changes in temperature from hot to cold, lights and voices in the night.

In 2015, the Syfy television channel aired an episode on their “Paranormal Witness: True Terror” series about the outpost, titled: “Beneath The Rock.” The show featured the same Marines Mr. Coghlan had interviewed in 2009.

“It first seemed like stress induced hokum,” Mr. Coghlan said of the Marines in a recent interview. His subjects had endured the blistering heat of the Afghan summer, friends killed at the height of the fighting and long rotations staring out into the night from the sandbagged confines of the Rock, waiting for an attack.

But the Marines, he said, had told him “there were some things they just couldn’t explain” despite their acute awareness of the anxiety that comes with combat.

One Marine, Mr. Coghlan said, had sworn he had heard Russian voices whispering in the darkness.

A squad that replaced the Marines who had been interviewed by Mr. Coghlan was warned by them that the outpost was haunted. A corporal who was part of the replacement squad, Dutch Perkins, said “no one believed them.”

But it wasn’t long after that Mr. Perkins heard some detached voice speaking in what he described as Russian while he stood guard, at his lone machine gun position, from midnight to dawn.

“Just thinking about it makes my hair stand up on my arm,” Mr. Perkins said. “It was real faint at first but eventually sounded like someone was standing post with me.”

The remains of two Soviet armored personnel carriers outside the Amir Agha villages in 2008, which were destroyed in 1982 as communist forces tried to clear the area.Credit…Thomas Gibbons-Neff

To the Marines and British who passed through, the sparse evidence of the Russians ever being around Amir Agha were the rusted hulks of two Soviet armored-personnel carriers several hundred meters to the east. They had been destroyed in 1982, in what was the Soviet Union’s first, and failed, offensive into Garmsir. The bloody battle was outlined in the book, War Comes to Garmser, as the Soviets’ “most famous sweep” in the district. The book said Amir Agha “with its shrines and expansive villages was a symbol for the resistance and a regular meeting place.”

Abdul Ghani, a longtime resident of Garmsir, said the entire area was considered holy after the battle. When the Soviet armored columns approached the Amir Agha shrine, the tanks became stuck in the mud. He added that a Soviet rocket, or bomb, hit the shrine but did not explode, attributing this to a divine intervention from Amir Agha, a revered descendant of Muhammed who settled in the area hundreds of years ago. Afghans have long seen shrines as conduits for miracles, from physical health to history-altering events.

“Several tanks went into the earth and disappeared,” Mr. Ghani said, adding that the ground around Amir Agha and the Rock is still considered “heavy and fearful” after dozens died there.

“The area is full of dead bodies and haunted,” he said.

How are information, disease, and social evolution linked?