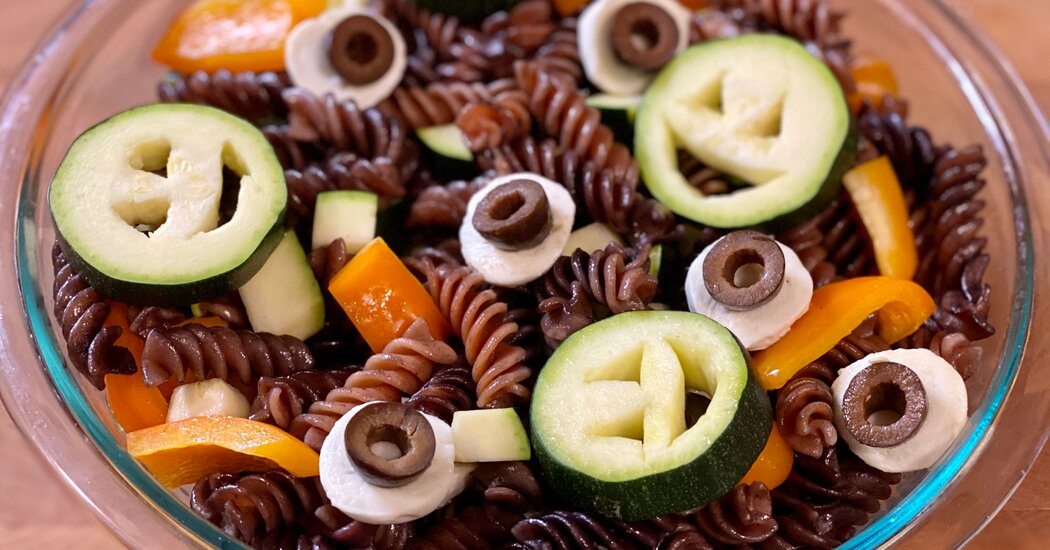 Our critics and writers have selected noteworthy cultural events to experience virtually or in person in New York City.

Best to stay in this Halloween weekend, lest you encounter 2020’s most frightening monster: the superspreader event.

Luckily, plenty of musicians are offering at-home entertainment to keep the holiday spirit alive. Though the experimental musician Circuit des Yeux recently announced her retirement from online concerts, she will perform virtually one last time under Saturday’s full blue moon. Her brew of folk and electronica radiates spooky intensity; for this set, streaming on Constellation Chicago’s YouTube channel at 9:30 p.m. Eastern time, she’ll give her spin on fan-selected covers. Tickets, available at Constellation’s website, are $15.

A small Brooklyn club with a big heart, Baby’s All Right will continue its ongoing series of virtual gigs on its website with a Halloween variety show, starting at 9 p.m. on Saturday, courtesy of the video production company House of Nod. The indie-rock group Japanese Breakfast will headline; tickets are available on a sliding scale at Eventbrite, with proceeds benefiting the artists and the staff at Baby’s All Right.
OLIVIA HORN

Julie Spina as Tamora during a dress rehearsal for Rogue Ensemble Theater Company’s production of “Titus Andronicus,” which will be performed outside Grant’s tomb in Riverside Park through Sunday. Credit…Jonathan Mastrojohn

Who’s buried in Grant’s tomb? No one, though Ulysses S. Grant and his wife are entombed inside. Who will be murdered outside it? A lot of ancient Romans. In honor of Halloween, the masked actors of Rogue Ensemble Theater Company will stage an outdoor, socially distanced production of “Titus Andronicus,” Shakespeare’s goriest tragedy, on the mausoleum’s grounds in Riverside Park. Tickets for performances, which run through Sunday, are available at Eventbrite for a suggested donation of $10 — a bargain when you consider it provides one sacrifice, one execution, one honor killing, one death by exposure, two children baked into pies and various other violent ends.

If in-person theater feels too risky, you can send chills down your spine remotely with Annoyance Theater’s “Splatter Theater,” live online Friday and Saturday at 10 p.m. Eastern time as a fund-raiser (a donation of $20 is suggested). A 34-year tradition, this show spoofs slasher films like “Halloween” and “Friday the 13th” with literal buckets of fake blood (the secret recipe: corn syrup, chocolate syrup and red and blue dyes). How will the masked killer murder characters when the actors are performing from their respective homes? That’s a sticky and extremely 2020 kind of problem for the directors Joe McDaniel and Cassidy Russell. One upside: Fake blood can’t splash you through a computer screen.
ALEXIS SOLOSKI

Jason Collins in a scene from Pam Tanowitz’s “Four Quartets,” which will be broadcast online for the first time from Saturday to Sunday on the Upstreaming section of the Fisher Center at Bard’s website.Credit…Maria Baranova

What with an ongoing pandemic and a fate-of-the-world election at hand, art that can briefly transport you to another plane of existence might be especially appealing this weekend. Pam Tanowitz’s 2018 dance “Four Quartets” is that kind of work, and from Saturday morning to Sunday night, it’s available online for the first time, on the Upstreaming site of the Fisher Center at Bard (tickets are on a sliding scale from $10 to $25; a $100 all-access pass adds a making-of documentary and a livestreamed conversation on Friday night).

Tanowitz takes her title and text from T.S. Eliot’s last great poem, which touches on death and disease, as well as on dance, but from a philosophical distance, musically musing about time. As Kathleen Chalfant recites the lofty words, they merge with Kaija Saariaho’s luminous chamber score, itself all beginnings and endings.

Magically, Tanowitz’s choreography and her superb dancers rise to this challenge, balancing elegance and idiosyncrasy, matching the beauty of the stage panels and doorways adorned with Brice Marden paintings. For 80 minutes, in Eliot’s words, “time present and time past are both perhaps present in time future,” but 2020 recedes.
BRIAN SEIBERT

Richard Croft as Gandhi, right foreground, in scene from the Philip Glass opera “Satyagraha,” which the Met Opera will stream on its website on Sunday.Credit…Ken Howard/Metropolitan Opera

The saxophonist Steve Lehman’s mother prepared him for his ultimate career early on by using recordings of works by experimental composers to soundtrack their own haunted house. If you want to run the same play with younger family members, you might jolt them into modernist curiosity with some of the stark, haunted timbres heard during this summer’s Merkin Hall concert by the JACK Quartet. (The show is preserved on YouTube, on the channel run by New Music New College.)

But what if you’re looking to hearten rather than startle the soul? The nightly free stream on the Metropolitan Opera’s website scheduled for Sunday is easily recommendable: The Met’s production of “Satyagraha,” an early Philip Glass opera, is one of the finest stagings the house has produced in recent memory. The tenor Richard Croft, singing the role of Gandhi (in a 2011 revival), meets the rigors of Glass’s minimalist patterns with smoothness of tone and an unflappable, determined spirit. When the opera’s final act builds a link between practitioners of nonviolent action — across decades and continents — the cumulative effect is momentous and moving. Since this winning production never made its way to DVD, its online broadcast, which will be available for 23 hours starting at 7:30 p.m. Eastern time, is of particular note.
SETH COLTER WALLS

The folks at Creative Kitchen will teach you how to make spook-ghetti on Saturday at Zoom events presented by Brookfield Place and the Children’s Discovery Museum of San Jose.Credit…The Creative Kitchen

Halloween has one horror that makes even rational adults recoil: the monstrous amounts of candy that their children bring home. Although curtailed trick-or-treating may diminish this year’s sugary hauls, the Creative Kitchen, which hosts cooking classes for children, offers its own recipes for healthy alternatives as well as for a few obligatory sweets.

On Saturday at 11:30 a.m. Eastern time, the organization will present the first of three Zoom events: a Kids Food Festival class during the free Brookfield Place Digital Halloween Bash. (That party, from 10:30 a.m. to 12:40 p.m., also comprises music, magic and puppetry.) Revelers will learn how to make spook-ghetti, which includes “witches’ hair” (whole-wheat pasta), “eyeballs” (black olives atop mozzarella) and “skeleton tears” (grape tomatoes). They can also create marshmallow ghosts and pumpkin pals, which are funny faces designed with pumpkin, cream cheese and other edibles on a rice-cake foundation. (Full ingredient lists are online.)

At 2 p.m., you can opt for sweeter treats with the Creative Kitchen’s 45-minute Eerie Edible Slime class. For $25, you’ll concoct two varieties; register and get details by emailing info@thecreativekitchen.com.

Finally, if you miss the morning bash, sign up for Halloween With the Creative Kitchen at the Children’s Discovery Museum of San Jose ($30). At 4 p.m. Eastern time, this 50-minute California celebration promises recipes (spook-ghetti and marshmallow ghosts), songs and other fun.
LAUREL GRAEBER

The Bad Plus — from left, Orrin Evans, Reid Anderson and Dave King — will perform at the Village Vanguard on Friday and Saturday.Credit…Channing Huskey

The Village Vanguard is where the Bad Plus’s career took off — where the trio played its first major gig in 2002, and where a Columbia Records executive fell for its brand of fine-tuned irreverence, ultimately offering the band a contract.

Eighteen years, over a dozen albums and one major personnel change later, the group still calls the Vanguard its second home. The original pianist Ethan Iverson played his farewell shows there at the end of 2017, and the current lineup — with Orrin Evans on piano — still performs there when it is in New York. On Friday and Saturday at 9 p.m. Eastern time, the group will return to play livestreams, which will be broadcast from the empty club on its website. Viewing passes are $10 each night.

The Bad Plus first became known for its swashbuckling covers of radio hits, like Nirvana’s “Smells Like Teen Spirit” and Blondie’s “Heart of Glass,” which it deconstructed and reassembled with the diligence of a diabolical scientist. By now the focus is squarely on the members’ own compositions, which have long since become an insider language of their own, balancing lyricism and counterpoint and skittering, half-broken rhythms. Over the past two years, Evans has mostly adapted to that patois, while nudging it further open with his own loopy, full-blooded style.
GIOVANNI RUSSONELLO

On Planet Scum Live’s Twitch channel, the longtime Upright Citizens Brigade performer Connor Ratliff has found not only a new virtual home for “The George Lucas Talk Show” but also an opportunity to put it on weekly, every Sunday night at 8 p.m. Eastern time.

Ratliff impersonates the “Star Wars” filmmaker, imagining him as a talk-show host and interviewing real guests in character. Griffin Newman presides as his sidekick, dressed as Watto, the junk dealer and slave owner of a certain Skywalker or two in “Star Wars: Episode 1 — The Phantom Menace.” Meanwhile, Patrick Cotnoir, as the show’s producer, attempts to keep everything on track.

One thing Twitch allows that live theater never can: light-speed interactivity among performers and the public alike. This past Sunday, audience members contributed fan art and memes related to discussion topics in real time, while Newman was able to display a cup topped with a Watto figurine as soon as one of the guests, the actor Taran Killam, mentioned once owning one as a child.

If you miss a live broadcast, episodes (and sometimes the after-show chats) make their way to the series’ YouTube channel. The guests for this week’s installment, titled “Halloweekend Spooktacular: COVID-1138: More American Willoweenie: The Battle for Elector,” include the actor John Ross Bowie and Kerri Kenney of “The State” and “Reno 911.”
SEAN L. McCARTHY

Environmental News Network – Is Your Drinking Water Toxic? This App May Help You Find Out.