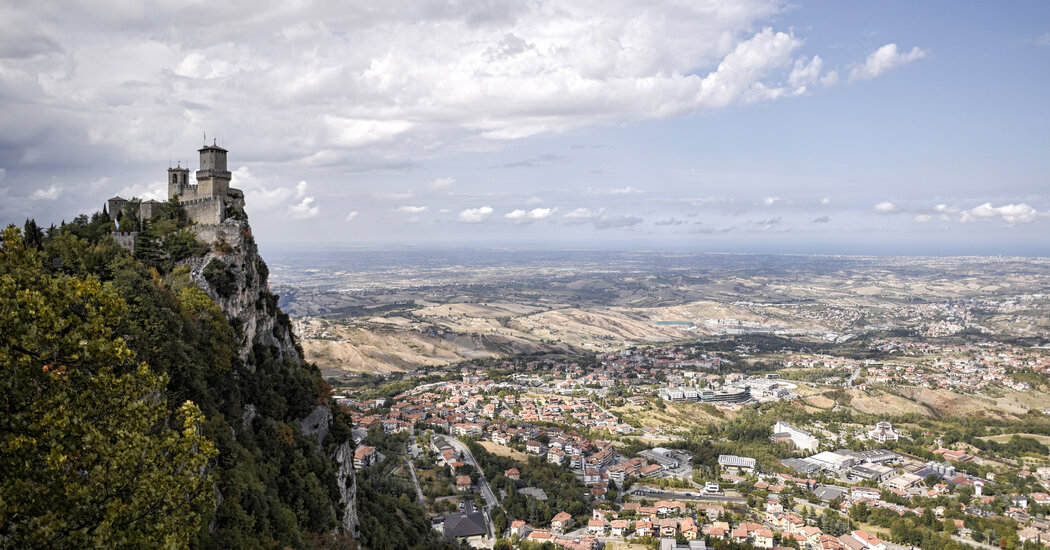 Local officials fear that diners traveling to San Marino, a small independent nation, will spread the coronavirus. A new curfew in Italy may slow the mealtime trend.

VERONA, Italy — The Republic of San Marino, a tiny independent nation located within Italy, is usually an afterthought for most Italians. But it recently became a source of outsize worry for a seemingly unusual reason: dinner.

Coronavirus restrictions introduced in Italy last month have required eateries to close at 6 p.m., but San Marino’s bars and restaurants can serve seated customers until midnight. And officials in the Italian regions that border the small nation fear that people traveling to what has essentially become a late-night restaurant quarter will bring the virus back with them.

“Someone needs to control the tagliatelle migrants,” read a headline in Il Resto del Carlino newspaper, referring to a pasta popular in the area.

On Wednesday, Prime Minister Giuseppe Conte of Italy approved a 10 p.m. nationwide curfew starting on Thursday, a move that will make it harder for people to go out — and out of the country — for dinner. Pressure had also been building on San Marino to change its policies.

Luca Beccari, San Marino’s foreign minister, said that despite Italy’s new rules, for now, his state did not plan to introduce a curfew or impose early closings on restaurants and bars. “We are not in a critical situation,” he said, “so we try to keep businesses open.”

“In an increasingly globalized world, viruses travel quickly, disregarding borders and frontiers,” 15 mayors from bordering Italian towns wrote in an open letter to San Marino, arguing that the country’s authorities should match Italy’s restrictions. The Vatican, for example, has followed Italy’s lead and adopted similar restrictions throughout the pandemic.

San Marino has recorded roughly 1,000 coronavirus cases among its 30,000 inhabitants since the pandemic began — one of the highest per capita figures in the world. But the authorities there have argued that with only three new reported cases on Monday, the situation is now under control. They also say that the strict social-distancing protocols in bars and restaurants are sufficient to keep the risk low.

“San Marino does not have the crowds of Italian cities,” Marco Nicolini, a member of Parliament in the microstate, wrote on Facebook last week. He added that locals there relied on cars to move across the hilly territory rather than using the types of public transit that in recent months have hindered Italy’s efforts to contain the virus.

But the early closing hours have caused widespread frustration among Italians, with restaurant and bar owners taking to the streets in recent days in several cities. And local Italian officials in the area around San Marino also took issue with the microstate’s policy.

“San Marino is actually an enclave in our territory,” said Jamil Sadegholvaad, a council member in the city of Rimini, noting that it was a mere 10-minute drive to restaurants across the border. The discrepancy, he said, has risked “jeopardizing the efforts that we are doing.”

The contretemps also drew attention from members of the national Parliament.

“Last weekend, the open venues in San Marino were taken by storm,” Marco Di Maio, a progressive lawmaker, said of Italians traveling to the nation state. “It is an economic problem, but also risks becoming a public health one.”

“All of the countries around our borders have the same limitations, sometimes even more restrictive than the Italians,” Mr. Di Maio said.

But the Sammarinese are not happy to be bossed around by their bigger neighbor. The small republic, mythologically founded in the fourth century A.D. by St. Marinus, a Christian stonecutter fleeing Roman persecution, has resisted conquerors for centuries and prides itself on the motto “Land of Freedom.”

San Marino, whose capital is on the peak of Mount Titano on the Apennines, may be a “Lilliputian state” Mr. Nicolini wrote in his Facebook post, but “it has its own dignity.” Accusing Italian officials of fostering “anti-Sammarinese sentiment,” he argued that in the end, if Italians traveled there to eat a plate of tagliatelle, “it wouldn’t be the worst thing in the world.”

Danilo Forcellini, owner of Giulietti Km0, a restaurant in San Marino, also dismissed the criticism of the nation state’s policy as “envy” among Italians.

He said that his restaurant had served an influx of Italians since the early closings were introduced, and he sees no reason to follow Italy’s lead.

“They think that, because we speak the same language, we are Italy,” he said. “But San Marino has nothing to do with Italy.”