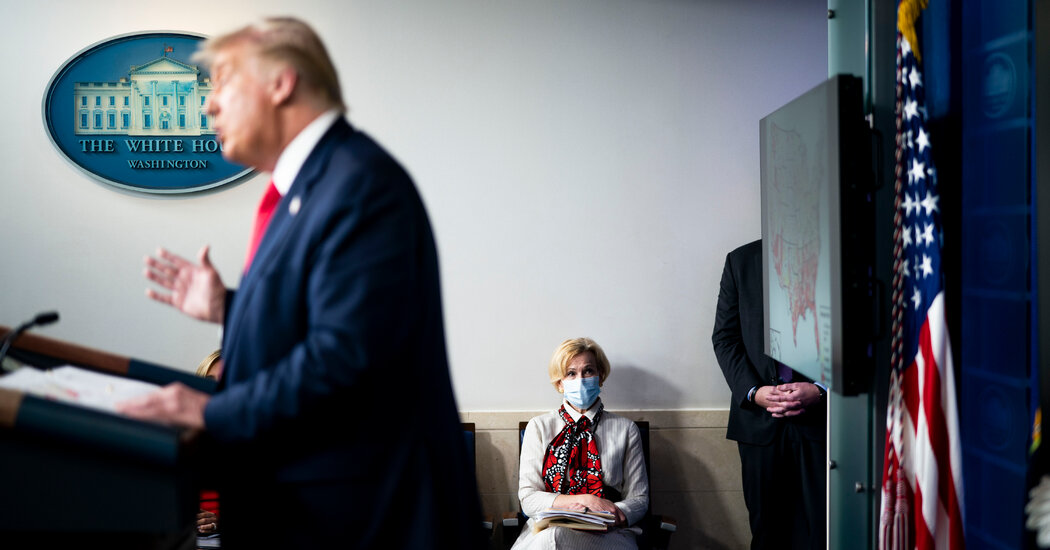 Dr. Deborah L. Birx, who has carefully straddled the line between science and politics as she helps lead the Trump administration’s coronavirus response, delivered a stark private warning on Monday, telling White House officials that the pandemic is entering a new and “deadly phase” that demands a more aggressive approach.

The warning — sent in a private memo to White House officials as the nation’s daily coronavirus caseload has broken records and approached 100,000 — amounted to a direct contradiction of President Trump’s repeated false assertions that the pandemic is “rounding the corner.” In it, Dr. Birx suggested Mr. Trump and his advisers were spending too much time focusing on lockdowns, and not enough on controlling the virus.

“We are entering the most concerning and most deadly phase of this pandemic,” Dr. Birx wrote, adding, “This is not about lockdowns — It hasn’t been about lockdowns since March or April. It’s about an aggressive balanced approach that is not being implemented.”

The report warned against the type of rallies that Mr. Trump has been holding. It also predicted that the United States would continue to see days when the number of new cases exceeded 100,000. Its existence was first reported by The Washington Post; a top White House official who has seen it confirmed its contents.

The blunt message was a striking one for Dr. Birx, who at least in public has resisted disagreeing with Mr. Trump. But with cases soaring around the country, and hospital intensive care units starting to fill up, government scientists and public health experts are growing increasingly concerned that the worst of the pandemic is yet to come.

Dr. Anthony S. Fauci, the government’s top infectious disease expert, has also been offering unusually blunt assessments, and is once again in Mr. Trump’s cross hairs as a result. At a campaign rally in Miami early Monday morning, Mr. Trump attacked the news media for its emphasis on the virus, which prompted the crowd to chant, “Fire Fauci! Fire Fauci!”

To that, the president responded: “Don’t tell anybody, but let me wait until a little bit after the election. I appreciate the advice.” What the president neglected to mention is that Dr. Fauci has Civil Service protections, and it would be extremely difficult for Mr. Trump to remove him.

Unlike Dr. Fauci, who has clashed repeatedly with the White House, Dr. Birx has taken a more measured approach, taking care never to openly criticize the president or his administration.

Dr. Birx was named the coronavirus response coordinator in March. The job has required her to manage the work of the White House coronavirus task force, tracking and orchestrating the government’s effort to contain the outbreak. In the early days of the pandemic, she projected a calm, authoritative presence — and a steady counterpoint to the mixed messages from Mr. Trump.

More recently, though, she has been eclipsed by Dr. Scott W. Atlas, Mr. Trump’s new pandemic adviser, who advocates allowing the virus to spread naturally among young people, while the government focuses its efforts on protecting the elderly and vulnerable. Many public health experts say such a strategy would lead to needless death and suffering.

Extinction watch: Over half the world’s Magnolia species face extinction