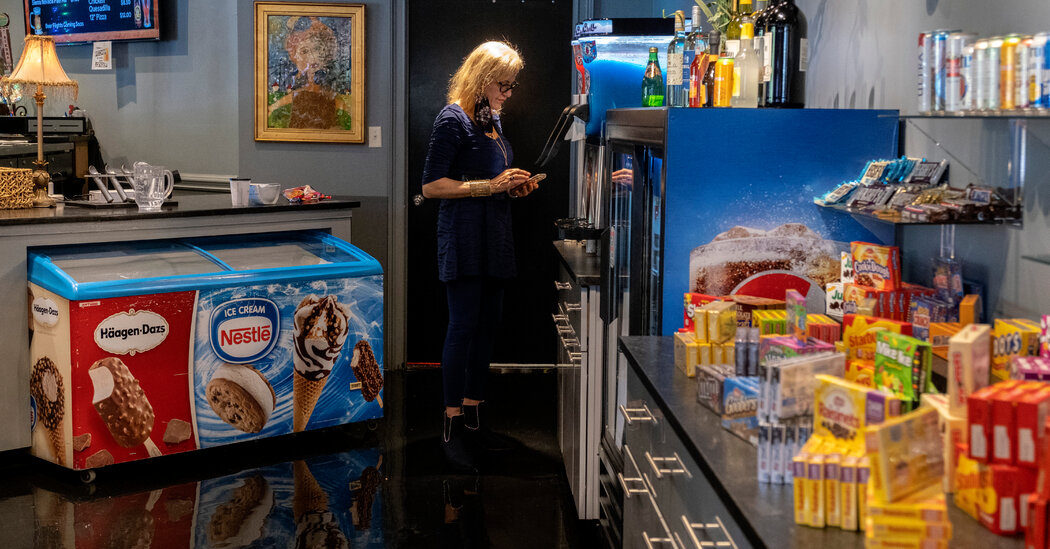 The pandemic has staggered the industry and left independent operations like the Park Plaza Cinema in Hilton Head Island, S.C., fighting to stay afloat.

The Park Plaza Cinema, a five-screen theater, shut its doors for five months. Lucie Mann owns and runs the theater with her husband, Larry.Credit…Gavin McIntyre for The New York Times

On a rainy day last week, 72 moviegoers visited the Park Plaza Cinema in Hilton Head Island, S.C., to see Liam Neeson in “Honest Thief.” It was the largest single-day attendance the independently owned five-screen theater had seen since reopening in August after a five-month shutdown. The feeling of celebration was short-lived. The next day, only 22 people showed.

Park Plaza, like movie theaters big and small around the country, has been decimated by the pandemic. After its long closure, it has established social-distancing protocols and installed new air filtration systems. It has tried initiatives like curbside popcorn sales. But the efforts have not been enough to offset the larger trends upending moviegoing, namely that many people still don’t seem inclined to return to theaters in large numbers and that Hollywood, with no audience to speak of, has pushed off most major releases until next year.

“We are an industry that is part of the fabric of America, and it’s going away,” said Lucie Mann, who owns and runs the theater with her husband, Larry. “If we don’t get aid soon, it’s going to change forever.”

Image Like other movie theaters around the country, Park Plaza has been decimated by the pandemic. Credit…Gavin McIntyre for The New York Times

The pandemic has brought national theater chains like AMC to the brink of bankruptcy. It has been just as unsparing with establishments like the Manns’, one of 602 independent owners in the United States with just one or two locations. Although accounting for only 12 percent of the total theaters in the country, these independent operations are often in smaller communities, providing movies to communities sometimes ignored by the major chains. After shutting its doors in March, Park Plaza received a Paycheck Protection Program loan in April for $47,000 to cover labor and overhead costs. That, plus a slew of private events, sustained the Manns through the summer.

Still, sales have dropped precipitously, down 88 percent from last year. The Manns thought they had an idea to make up for some of that when they began offering socially distanced special events in June. People could rent out a theater for $100, bring their own DVD and invite a handful of friends.

Kris Ruffner, who used to visit the theater once a week before the pandemic, hosted two such events. During one, she invited 20 friends to watch “Bridesmaids.”

“It was nice,” Ms. Ruffner said, especially “at a time when no one could go and do anything. Park Plaza allows the seats to be socially distanced, so none of my friends had any problem with that.”

But someone complained, and in July the state’s department of commerce got in touch, via the sheriff’s department, reminding the Manns that any movie operations were considered nonessential.

So the private gatherings stopped and the theater’s financial situation has since become increasingly precarious. Last week, Mr. Mann told Ms. Mann that they had only $1,000 left in the bank.

“It’s becoming a crisis,” she said.

The Manns bought the theater in 2010, after Ms. Mann’s career in home building dried up because of the recession.Credit…Gavin McIntyre for The New York Times

Ms. Mann, 61, is an architect by training and Mr. Mann, 67, a home builder. They bought the theater in 2010, a restart after Ms. Mann’s decades-long careers in home building dried up because of the recession. (Mr. Mann still does home renovations.) Neither was an avid moviegoer, but they took the leap when the previous owners told them that the business “would run itself,” Ms. Mann recalled. It hasn’t.

The couple have poured copious amounts of time, money and energy into revamping the aged theater. In 2012, they spent $400,000 replacing the old film projectors with digital projection and upgrading the sound. In 2016, they threw out all 650 theater chairs, opting for 250 oversize reclining leather seats that reduced capacity yet helped increase sales because of the higher-end experience.

The Manns, who had no formal kitchen experience, expanded their food and beverage offerings (Ms. Mann’s flatbreads are very popular), introduced a sophisticated wine and craft beer menu and even enlisted their pets, Antoinette and Abileene, two hairless Chinese crested dogs, to walk patrons to their seats and perform tricks on command. (Customers are also allowed to bring their own dogs, provided they’re less than 20 pounds.) Revenue increased roughly 15 percent year after year. The business was a hit.

“Lucie made Park Plaza really cute,” said Linda Peterson, a financial analyst who lives on the island and often dons pajamas to attend the late show with her daughter. “And she has wine. My goodness, where else can you drink wine while watching a movie?”

Hollywood has delayed almost all major film releases until 2021.Credit…Gavin McIntyre for The New York Times

Today, not many people are stopping in for an adult beverage and a flick. After the private events were first stopped, Ms. Ruffner started an online fund-raiser for the theater and brought in close to $15,000. And Ms. Peterson started a petition, urging South Carolina’s governor, Henry McMaster, to reopen Park Plaza, arguing that the boutique theater has limited capacity and all its patrons wear masks while inside. It garnered close to 2,000 signatures and landed the Manns a meeting with the governor. He allowed the theater to open that day.

“I was dumbfounded to see the local support,” Ms. Mann said.

The Manns reopened on Aug. 21 in anticipation of the release of “Tenet” from Warner Bros. But the Christopher Nolan-directed movie generated only $3,659 after playing in the theater for six weeks. No other new releases have done much business, either. Since Labor Day, each weekend at the domestic box office has been down 90 percent from a year earlier, according to Franchise Entertainment Research, a box office analyst firm.

Now, the studios have retrenched again and shifted the majority of their large releases into 2021. “Wonder Woman 1984,” scheduled to come out on Christmas Day, is the only big-budget movie still on the 2020 calendar, but the Manns are not optimistic it will open this year.

Abileene, one of the Manns’ two dogs, is a usual presence at the theater.Credit…Gavin McIntyre for The New York Times

“If all the other big movies have been pushed to April and July, we don’t see a big movie standing alone in December with the big chains closed and New York City and California not opening,” Ms. Mann said. “Those two control the whole world in our industry.” (California has allowed theaters to open in San Francisco and San Diego Counties, though they remain closed in the film capital, Los Angeles.)

These days, Ms. Mann has restarted her private events, now charging $250 to rent out a theater. On Saturday night, the local Italian-American Club hosted a private party where 10 people stopped in for a screening of “Moonstruck.” She tried airing the local high school football game on Saturday afternoon, but no one showed. She was equally unlucky last weekend when she booked Pixar’s “Coco” in an attempt to attract families, but the seats remained empty.

Mr. Mann spends his days on the phone trying to resurrect a disaster loan from the Small Business Administration that keeps being denied. And he’s applying for a newly available grant from the state. Last week, a patron wrote a $15,000 check to the theater, allowing it to remain operational for a few more weeks while the Manns try luring in more customers. If aid doesn’t materialize — either in the form of federal funding, which looks unlikely given the political climate in Washington, or a decision from Hollywood studios to move some big movies back into 2020, which they said they would consider only if theaters reopened in New York and Los Angeles — the Manns figure they will have to shut down by the end of the year.

Park Plaza has long been a draw for locals and tourists alike.Credit…Gavin McIntyre for The New York Times

“For a lot of people, Park Plaza is part of their experience when they vacation here,” Ms. Ruffner said, adding that should the theater have to close forever, “it would be a devastating loss.”

Ms. Mann is not afraid of reinventing herself. She did so in 2010 and is now well versed in the vagaries of the movie exhibition business: booking blockbusters for her out-of-town clientele in the summer and Thanksgiving, and turning her attention to sophisticated art-house fare during the off-season when locals dominate.

“I never knew anything about movie lovers,” she said. “But they are really cool people.”

But now she spends her nights lying awake asking questions she can’t answer, from how to persuade non-moviegoers to come to the theater to what happens to the fabric of the culture if movie theaters go away.

“If people don’t have entertainment, how is everyone in the economy supposed to survive when businesses are closing left and right?” Ms. Mann said. “My hunch about the exhibition business being in the middle of a revolution was correct. I just didn’t know it was going to be through an event like this.”

If Park Plaza is forced to close, one regular attendee said, it will be “a devastating loss.”Credit…Gavin McIntyre for The New York TimesContinue reading the main story