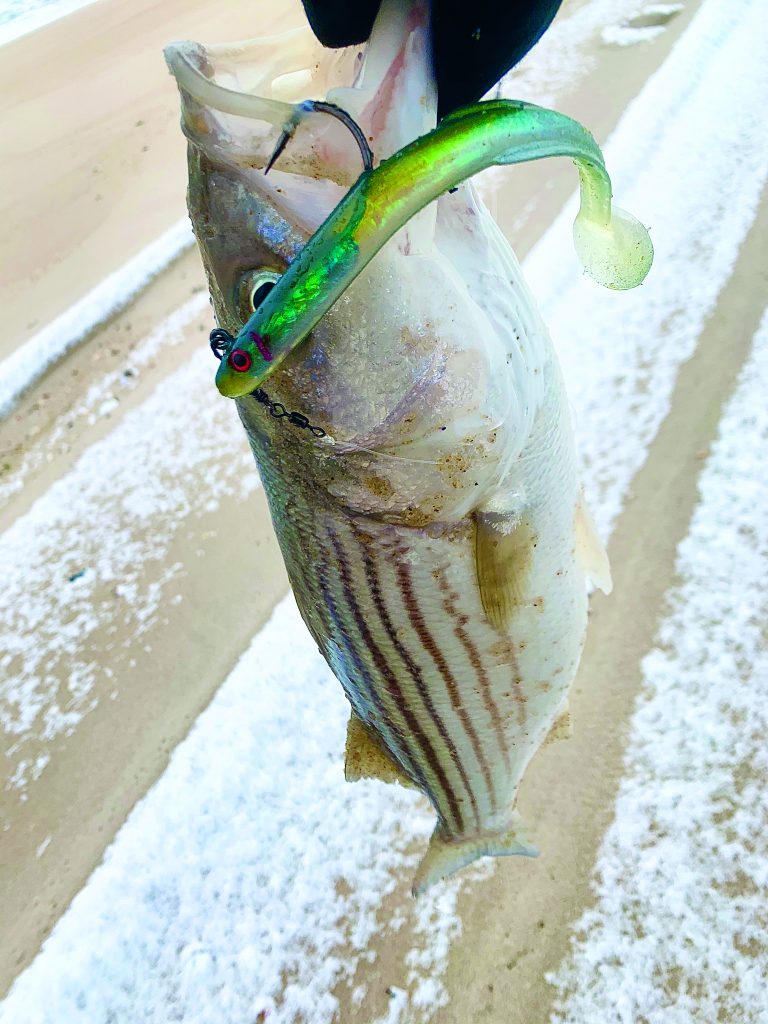 The striper action heats up along the New Jersey beaches around Thanksgiving as bass gorge on sand eels.

It has been eight years since Super Storm Sandy rearranged the New Jersey and New York coastlines, and “beach replenishment” became an annual event at all the shore communities. Along with that went a massive population of sand eels that hung inshore along the beaches and provided some outstanding surf fishing. They were gone, but things are looking promising again.

I’ve heard that once sand eels are “dug in,” they stick around an area for 6 or 7 years, and when they leave, they may not return for another 6 to 7 years.

Sand eels seem to be on most beaches and out to 70 miles offshore right now. Their numbers have been building up each year, much like they did prior to the epic sand eel run of 2011. When both fluke and yellowfin tuna are being caught during the summer with bellies loaded with sand eels, it’s a good indication that these baitfish are abundant. I had both fluke and bluefish spit out sand eels just about all summer long. Plus, presentations that mimicked sand eels made up for some of my best catches.

Now, we just need some stripers to find the bait. It seems the run takes longer to get going every fall, and when it does, it is usually shut down by cold weather.

In 2019, I watched one decent wave of striped bass make their way south, and around the first week in November, they reached the northern New Jersey coast. For the most part, the fish stayed well off the beaches—way too far for even the best surfcasters to reach.

It wasn’t until a few days before Thanksgiving—which tends to be one of the best blitz days of the fall in New Jersey—that a school of smaller fish moved in and started hunting daily along the sandbars. It didn’t take long to pinpoint the feeding pattern since it was very much related to a certain tide stage and the presence of sand eels.

If you cruised the surf line looking for breaking fish before you began fishing, you really hurt your chances last fall. The fish never really showed themselves by swirling on or chasing bait to the surface and drawing in flocks of birds.

I had to work a stretch of water, find key points on the sandbars dropping into deeper holes and deep troughs on the edge, and fish them. The fish were there on the soft structure every day, feeding on sand eels on the bottom. It was possible to catch 20 to 30 stripers a trip until the weather became too cold to feel my hands and ice began accumulating on my guides.

Needlefish were especially productive, and though they may not be the most fun to fish, they might be one of the most effective. Patience is key because I fish them at two speeds—slow and stopped. There is nothing like getting slammed on a pickup off the bottom in the dark (and daylight). Needles are my number-one presentation when fishing around sand eels.

My number-two presentation is a teaser rig with a custom-tied sand eel teaser ahead of a rubber swim shad or paddle tail. Likewise, “Tin Squids” with rigged rubber eels dragged along the bottom caught fish many decades ago and still do today.

4 Places to Find May Stripers