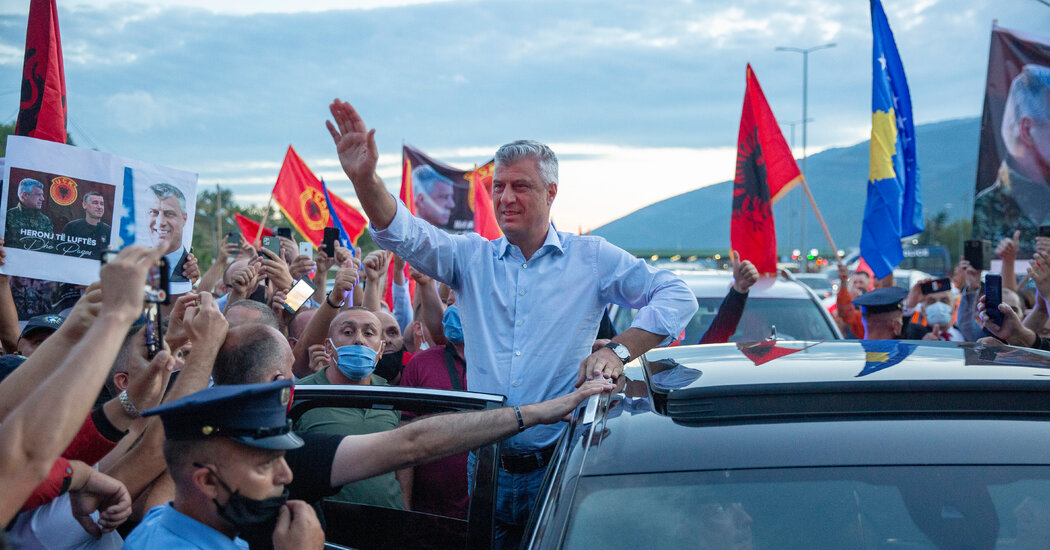 Hashim Thaci was a guerrilla leader during Kosovo’s battle for independence from Serbia in the 1990s.

President Hashim Thaci of Kosovo greeting supporters after returning from the Netherlands in July. He has previously denied the accusations against him.Credit…Visar Kryeziu/Associated Press

The president of Kosovo, a guerrilla leader during Kosovo’s fight for independence against Serbia, resigned on Thursday to face charges of war crimes and crimes against humanity at a special international court in the Netherlands.

The president, Hashim Thaci, 52, said at a news conference in Pristina, Kosovo’s capital, that he was stepping down to protect the office of the presidency.

“From today, it is a new chapter for Kosovo,” said Vigan Qorrolli, a law professor at the University of Pristina in Kosovo’s capital. Many see the president’s resignation as an opportunity for “new stability here to bring prosperity,” he added.

The former commander of the Kosovo Liberation Army, Mr. Thaci was indicted in June by the special court in The Hague on 10 counts of war crimes. Prosecutors accused him and other former independence fighters of being “criminally responsible for nearly 100 murders.”

Mr. Thaci had previously denied the allegations but said he would resign if the charges were confirmed by a judge, as they were this week.

Late Thursday, the court said that Mr. Thaci had arrived at The Hague and had entered the international detention center on the city’s outskirts. Two others, who were similarly indicted for war crimes, Kadri Veseli, the leader of the Democratic Party of Kosovo and Rexhep Selimi, a lawmaker, traveled with him and also entered the prison.

A judge at the court also confirmed war crimes charges against Jakup Krasniqi, a former interim president of Kosovo. Prosecutors said Wednesday that he had been arrested with the help of European Union authorities.

Image Police officers from a European Union team in Kosovo near the house of Jakup Krasniqi, a former interim president, on Wednesday. Prosecutors said Mr. Krasniqi had been arrested.Credit…EPA, via Shutterstock

The indictment gave hope to “thousands of victims of the Kosovo war who have waited for more than two decades to find out the truth about the horrific crimes committed against them and their loved ones,” said Jelena Sesar, Amnesty International’s Balkans researcher, in a statement. She added that it showed “senior officials are not above the law.”

Kosovo’s parliamentary speaker, Vjosa Osmani, took over Mr. Thaci’s duties, becoming acting president in a ceremony on Thursday. Ms. Osmani, 38, said in a speech that Serbia was responsible for those who died in the war.

Mr. Thaci had been Kosovo’s president since 2016, a largely ceremonial role, though he has also served as prime minister. He is a mainstay of Kosovo’s politics whose supporters have heralded him as a war hero, while his critics have accused his government of corruption and of rigging the judiciary.

The war-crime accusations levied against Mr. Thaci, Mr. Veseli and others in June include murder, enforced disappearance of people, persecution and torture, including of political opponents. But the charges needed to be reviewed by a judge and confirmed, which was the latest development.

The charges against the president were brought after Kosovo’s Parliament set up the special court in the Netherlands in 2015 to determine whether guerrilla fighters had committed war crimes.

Prosecutors said that the charges were made public because of “repeated efforts” by Mr. Thaci and Mr. Veseli to obstruct the court, and that the two had carried out a secret campaign to “obstruct the work of the court in an attempt to ensure that they do not face justice.”

Though Kosovo won its sovereignty in 1999 and announced its independence in 2008, Serbia has refused to recognize Kosovo’s independence and negotiations for a peace deal have flailed. European and American officials have been mediating dialogues between the two sides in the hopes of improving relations and securing a settlement.

News of the indictment in June delayed a planned meeting between Mr. Thaci and President Aleksandar Vucic of Serbia at the White House, the first formal talks between the two in over a year. Kosovo’s prime minister, Avdullah Hoti, attended a summit in September instead.

Pope Francis Issues Law to Combat Corruption in the Vatican