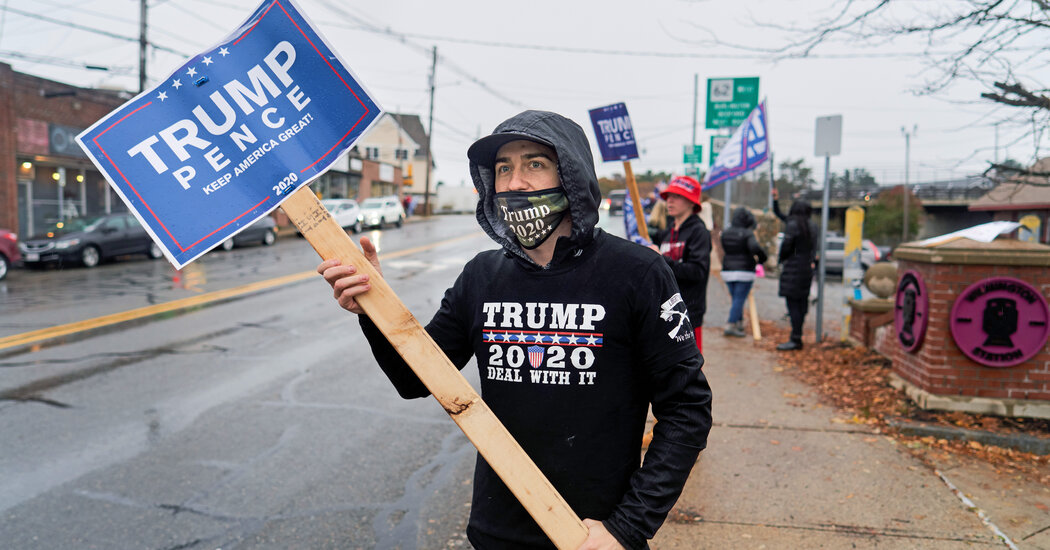 Nick Rocco, a passionate Trump follower in the Democratic bastion of Massachusetts, slowly realized it wasn’t going his way.

Nick Rocco, 26, spent the summer and the fall campaigning for President Trump.Credit…David Degner for The New York Times

It was still summer when he got kicked off his town’s community Facebook page for his pugnacious pro-Trump posts. When someone stole the Trump sign from his yard, he replaced it with half a dozen new ones, one featuring an expletive.

At his wedding last month, guests sauntered out in oversize Donald and Melania masks, and he savored the discomfort of his wife’s Democratic relatives.

“The thing is, we don’t care,” Mr. Rocco said. He is looking forward to many years of Trump presidencies. “I hope Don, Ivanka and Eric all run eventually,” he said last week.

Mr. Rocco represents a notable category: young voters drawn into politics for the first time by Mr. Trump. He did not go to college and prides himself on his independent thinking; he puts himself in the category of street smart, not book smart.

He had never bothered to register to vote until 2016, when he first heard Mr. Trump debate on television, and saw a political figure who reminded him of himself.

“He doesn’t speak like a politician, he speaks like I do,” he said. “I can understand what this guy is saying. He’s talking like an American person talks. He’s not talking like a robot.”

He and his wife, Jenna, a 27-year-old nurse, went all in, organizing rallies and standing on roadsides. As the election and vote counting neared an end, daily check-ins with the Roccos found their moods shifting from excitement to foreboding.

The family — Nick, Jenna and their two daughters — spent the afternoon at a rally beside Main Street in Wilmington, where passing motorists responded with honks and obscene gestures. Across the street, at a Trump pop-up store, a T-shirt cheerfully boasted, “I’m a deplorable.”

The abuse did not bother Mr. Rocco; it seemed to energize him. (“I like to be the center of attention,” he explained.) When a distraught woman with a curly ponytail flipped him off through her window, he bounded to the curb and danced a jig, cheerfully shouting obscenities back.

The Roccos had not paid much attention to the polls because they were convinced that Mr. Trump was going to win. This was based on attendance at rallies, and because of their circle of acquaintances: With the exception of his brother, Mr. Rocco said, he had never met anyone who supported Joseph R. Biden Jr.

When Fox News began reporting polls showing Mr. Biden in the lead, Ms. Rocco tried tuning into One America News, the right-wing cable network, which predicted a convincing victory for the president. The Roccos got news from a variety of sources — TikTok, QAnon, the pro-Trump comedian Terrence K. Williams, the YouTube mystic Clif High. “I’m a conspiracy theorist, I guess, if you want to call it that,” Ms. Rocco said.

These sources cheered them up. They held out hope that Mr. Trump could win in Massachusetts. Or at least in Wilmington.

Ms. Rocco confessed that she was exhausted with the months of public confrontation. Mr. Rocco, she complains, sits on Facebook and argues with strangers for hours.

She was worried that their in-your-face support for Mr. Trump, in a state so hostile to him, would end up hurting their daughters.

“I’m just tired of all the arguing that people are doing,” she said. “I wish sometimes Trump would just say — he doesn’t even have to mean it — that he would be the president for everybody. Just say those words.”

In the last hours of the campaign, Ms. Rocco’s confidence in Mr. Trump’s victory had begun to buckle. Late into the night, when he gave his final speech at a rally in Grand Rapids, Mich., she was surprised to find herself weeping. “It was sad that it could be his last rally,” she said. “It could be that he could not be president anymore.”

At 7 on election night, the Roccos settled themselves on the sofa to watch the returns. Ms. Rocco was stress-eating Halloween candy, KitKats and Smarties.

They had passed the last hours of the campaign on a dark roadside outside a polling station, fingers frozen, waving Trump flags at passing vehicles. Mr. Rocco muttered to himself, “Me standing out here is kind of pointless.”

But then he reminded himself what kept him out there all these months: People had disrespected him. The Facebook group manager who had kicked him off. The neighbor who took his yard sign. Teachers who responded to his daughter’s enthusiasm about Mr. Trump with awkward silence.

“People who don’t like Trump, I honestly think they are very soft people,” he said. “That is why the world is becoming so sensitive today. Back in the day, you could throw a snowball at someone at school and everything was fine. Nowadays, a letter gets sent home: Your child is being mean.”

Mr. Rocco has tried to do the same. His older brother, who he describes as the brainy one, took the other path, winning a scholarship to college. (He is the Biden voter.) But Mr. Rocco’s aspirations were staunchly blue-collar; he chose trade school and went to work at 17.

The job market, he feels, has justified his choices, leaving many college graduates twisting in the wind.

“A plumber goes to my house, he fixes a clogged toilet, he makes $200,” he said. “The most paying jobs are the people who are fixing things. You’re going to school, and you’re paying $500,000 to go to school, and you might not be able to get a job.”

By 9:30 p.m., Massachusetts was a lost cause, but Mr. Trump seemed to have a commanding lead in Florida and Pennsylvania. The Roccos were run down, probably from the hours spent at rallies, and they drifted off around 11 p.m. with a warm, spreading certainty that their candidate was going to win.

A supporter wearing a mask of Mr. Trump during a November rally in Wilmington.Credit…David Degner for The New York Times

At 2:30 in the morning, Ms. Rocco awoke with a start. When she checked her news feed, she discovered that Mr. Biden was leading in several Western states, and Mr. Trump’s advantage in states like Wisconsin and Michigan was melting away. Now she could no longer sleep.

“I’m about 100 percent sure there’s fraud going on,” she said, although there was no evidence of fraud.

When he woke up, Mr. Rocco shared her outrage. “Who knows whether these numbers are correct or not?” he asked. “Who are the people counting those votes?”

He wondered whether civil unrest would now break out. Over the summer, watching the Black Lives Matter protests, he had applied for a gun license, but he had been refused: Massachusetts, he grumbled.

When he saw the pro-Trump crowds gathering outside counting locations in Michigan and Arizona, he wished he could join them.

“It’s not ending,” he said. “I would love to see Trump supporters come out and take a stand.”

By Thursday morning, the Roccos had given up on Fox. “There’s definitely people at Fox who don’t like Trump,” Mr. Rocco said. “The commentators, they are normally aggressive. I think they got a leash put on them somehow, some way.”

He took the position that the vote count should have ended on Nov. 3. He reassured his wife that the decision would finally lie in the hands of the Supreme Court.

“They’re doing anything they can to stop him from becoming president,” he said. “It’s not over yet. He’s going to win. It’s just a matter of who has the balls to close down first.”

But an alternative path was beginning to take shape in his mind, in case Mr. Biden prevailed.

Maybe the Republicans could impeach Mr. Biden. Maybe a Republican Senate could tie his hands for four years. Maybe, after a long-planned Caribbean vacation, Mr. Rocco would fly out to Arizona and join the protesters. Maybe he would post new yard signs.

When Mr. Trump delivered remarks at the White House, Mr. Rocco was struck by his appearance. The president looked drained and serious, no longer a happy warrior. The message the president conveyed was grave: that American democracy is a farce.

“He’s been telling us about that for months, and I think it’s actually happening now,” he said. “How are we ever going to be able to vote for a president again, now that we know that fraud has been going on?”

The news on Friday morning was no surprise. Officials in states that had not been called had spent much of the night meticulously counting ballots, in the presence of observers from both parties.

Mr. Biden was a hair’s breadth from the presidency, on course to win at least 270 electoral votes.

Ms. Rocco sounded resigned. “I think that basically it’s pretty much done,” she said. “But they cheated. But it’s done.”

The people she had spent the summer with, the Trump activists, she could see them packing it in, returning to normal life.

“They’re just going to want to move on,” she said. “My aunt’s already saying, ‘Stop being a crybaby.’”

Mr. Rocco was not ready to give up, though. The president would not concede, he was sure of that. “I’d be pissed at him if he did because I would never do that,” he said. “He’s not that type of person. He doesn’t give up easily. I see a lot of myself in him.”

Casting his mind into the future, past this election, he could imagine any number of outcomes.

He was gathering his things — he had a shift at the salon — and his tone was calm. He is only 26. There is plenty of time. He was waiting for cues from his leader.

Extinction Watch: A living relic, sacred to a Chilean tribe