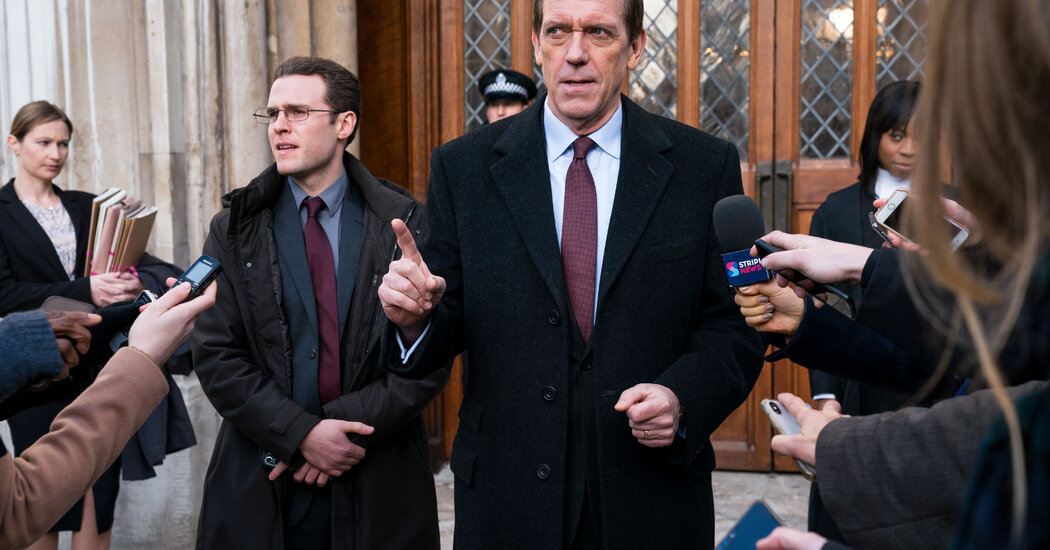 Hugh Laurie comes to Masterpiece on PBS, and Greek mythology gets the anime treatment on Netflix.

‘Roadkill’ on Masterpiece
When to watch: Sunday at 9 p.m., on PBS. (Check local listings.)

Hugh Laurie stars as a conservative politician who is flying high off a legal win but also hiding some unsavory secrets from his constituents and family. As far as political soaps that think they’re political thrillers go, this four-part British series hits all the marks: ample scheming and shouting, troubled people in loud nightclubs with red walls, improbable investigative strategies from sad reporters, a moody score, shoes clacking in somber hallways — you know the drill. Because “Roadkill” is about politics but not the actual politics of this moment, it feels like a transmission from a different, easier planet. Not happier or more just, but easier.

Charlotte Ritchie and Kiell Smith-Bynoe, foreground, in a scene from “Ghosts.”Credit…HBO Max

‘Ghosts’
When to watch: Now, on HBO Max.

This comedy isn’t quite as clever as “What We Do in the Shadows,” but it has a similar setup, in which modernity clashes with the supernatural in ordinary, day-to-day contexts. Here, Alison and Mike (Charlotte Ritchie and Kiell Smith-Bynoe) inherit an old, decrepit house that is “haunted” by all the people who ever died there, including a scout leader with an arrow through his neck, a moony poet, a fussy noblewoman and a witch who was burned at the stake. There’s a warm, silly vibe to everything and occasional moments of real wistfulness. If you wish Unfrozen Caveman Lawyer would cross paths with Phoebe Waller-Bridge’s “Crashing,” or you love “Miracle Workers,” watch this.

A scene from “Blood of Zeus.”Credit…Netflix

‘Blood of Zeus’
When to watch: Now, on Netflix.

For something that scratches a “Game of Thrones” itch but feels special and dazzling, watch this anime that is inspired by Greek mythology but tells a story of its own. Heron (voiced by Derek Phillips) discovers he is more than a lowly outcast: His father is Zeus, but his mother is mortal, and Hera did not take kindly to his conception. Also, there are demons lurking, and somebody will need to fight them off. The eight episodes are fantastically engrossing, and the imagery is gorgeous, adding layers of beauty to righteous rage. I will warn you, though, if you are weird about eyeball violence, proceed with caution.