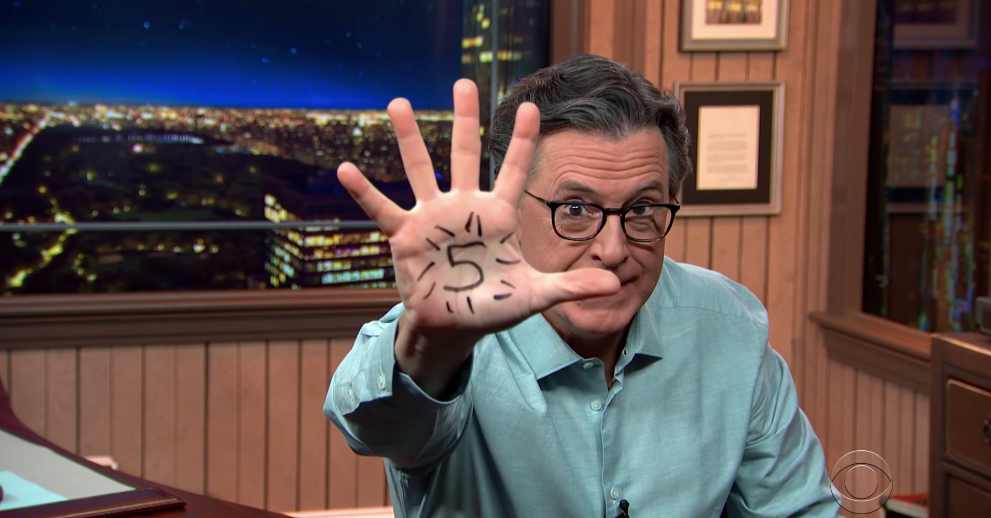 “It feels like we’re all Charlie Brown going to kick the football, but we know at the last second Lucy’s gonna give us coronavirus,” Stephen Colbert joked on Thursday.

“Experts say that we need hope for the future to help ward off this anxiety. However, some Americans say they’re too afraid to hope,” said Stephen Colbert.Credit…CBS

Late-night hosts were skeptical of the latest polls Thursday night. With just five days left before Election Day, Stephen Colbert and others were too nervous to be optimistic about Joe Biden’s sizable lead in red states like Wisconsin and Minnesota.

“Snap out of it, Colbert. Don’t believe the polls. You promised yourself after the last election that you would not ‘Pokemon Go’ down that road again. “ — STEPHEN COLBERT

“Experts say that we need hope for the future to help ward off this anxiety. However, some Americans say they’re too afraid to hope. This is likely a protective mechanism in response to the 2016 election. It feels like we’re all Charlie Brown going to kick the football, but we know at the last second Lucy’s gonna give us coronavirus.” — STEPHEN COLBERT

“Two national polls this week showed Biden up by 12 and 11 points each, which, somehow, gives me even more anxiety than if the race was closer. It’s like when your wife says she wants you to go on that guys’ trip to Vegas for the weekend and you’re like, ‘OK, so what are you gonna do?’ [Imitating wife] ‘Oh, nothing.’ ‘You won’t be, like, lonely?’ ‘Oh, no. I’ll be fine.’ ‘Well then I’m not going!’” — SETH MEYERS

“Strangely, Trump’s blatant disregard for human life seems to be hurting him with the key demographic of humans. The latest ABC News/Washington Post/P.F. Chang’s Great Wall of Chocolate poll shows that Biden is leading Trump by 17 points in Wisconsin. Seventeen? Trump doesn’t know whether to be worried about that lead or to start dating it.” — STEPHEN COLBERT

“It’s the kind of maddening poll result designed to keep you up all night mainlining Xanax and digging through cross tabs: ‘All right, let’s see here. Biden is overperforming with liberal suburban women under 35 who drink Tazo tea and play tennis, but underperforming with centrist NASCAR dads over 50 who refer to the bathroom as their ‘office.’” — SETH MEYERS

“In a new poll I saw that Biden is up four points in Florida. Meanwhile, Tucker Carlson claims that he has polls that show Trump ahead, but they got lost in the mail.” — JIMMY FALLON

“Today, Trump and Biden were both campaigning down in Tampa, Florida. People in Tampa were like, ‘Come on, we just lost the World Series; now we’ve got to deal with this?’” — JIMMY FALLON

“Yep, Trump went to Tampa and this was nice: He brought some frozen Nebraska supporters so they could thaw out.” — JIMMY FALLON

“As for Trump, you can tell his campaign is low on money ’cause he asked Biden if he wanted to split an Uber back to the airport.” — JIMMY FALLON

“Both candidates stopped in Tampa on the same day — it’s an old-fashioned Tampa Bay showdown. The Grandpas and the Tampas. The old Tampa two-step. The Melee in the Bay.” — JAMES CORDEN

“The only people at that rally who are socially distanced are Donald and Melania, and they were doing it before Covid.” — JAMES CORDEN

As Corporate America Flees Trump, MyPillow’s C.E.O. Stands by Him