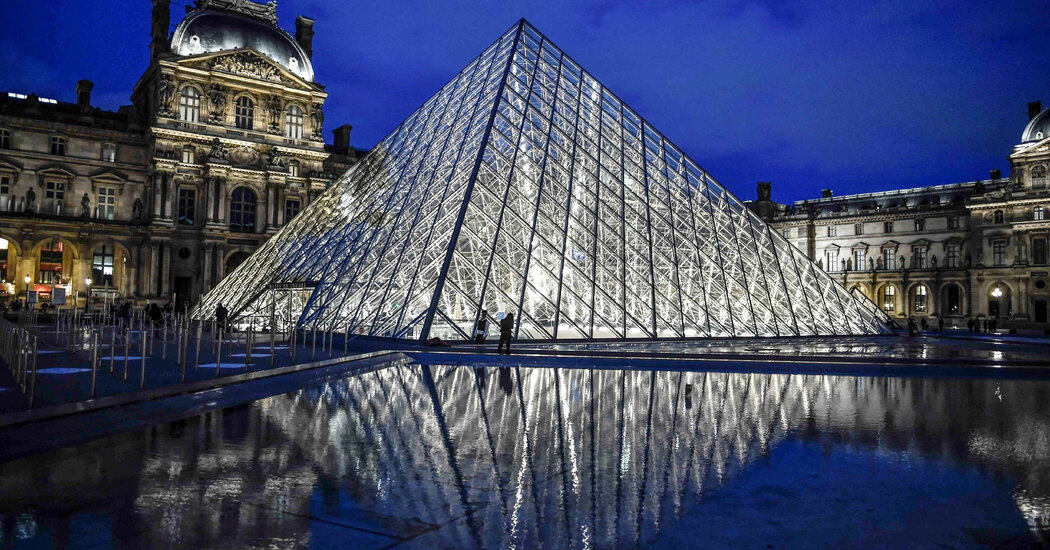 Many of the continent’s museums, theaters, concert halls and bookshops have been forced to close again, and now, people’s reactions have changed.

With France now in a second lockdown, cultural landmarks like the Louvre museum are again closed to the public.Credit…Stephane De Sakutin/Agence France-Presse — Getty Images

LONDON — Just as cultural life in Europe was learning to adapt to social distancing, small audiences and the need to wear face masks, along have come new lockdowns.

Over the past month, Europe’s museums, theaters, concert halls and bookshops have found themselves forced to close for the second time this year as coronavirus cases have soared across the continent.

Lockdowns are in place in England, France, Germany, Italy and elsewhere. Most are expected — for now — to be only about a month long, and people are also still allowed to go to work in many countries: Actors can rehearse and dancers practice, even as the only audiences possible are online.

There is another difference, too: people’s emotions. For some a second lockdown is more hopeless, while others are more optimistic. Then there are those who’re frustrated: On Monday, almost 40 German museum directors issued a statement asking the country’s government not to force them to close.

To understand how people are feeling about the situation, we spoke to six cultural figures, including an Italian opera star, a renowned Parisian bookseller and the head of London’s Victoria and Albert Museum. Here are edited excerpts from those conversations.

It’s so sad we had to stop.

During the nine times we played Samuel Beckett’s “Waiting for Godot” for the Toneelhuis Theater recently, the audiences were very moved. They were back in the theater for the first time, but I think it was also because they got to see these two figures, Vladimir and Estragon, who are waiting for something to happen.

They could really empathize with them, because humanity has for months now been waiting for hope, for a vaccine, for a solution, for a way out.

We did everything we could to make it safe. We rented a gigantic hall here in Antwerp as big as a football field, and we decided to build our own stage for 200 people, totally Covid-proof. But alas …

The first lockdown was a great shock — many people in Italy were in hospital, many were dying. I was depressed. “What future can we have?” I thought. But this time I’m not depressed. I’m angry. This decision to close theaters is crazy — I don’t understand it.

So many other people feel the same way. That’s why you’re seeing these protests.

Over the summer, everybody who works in theaters — the directors, the musicians, the singers, the technical staff — worked to make them Covid safe with certain protocols. And the moment we find a way, the prime minister says, “No! Goodbye!” It’s terrible. It’s like a demagogy.

I could understand a total lockdown. But why only us and a few other places — gyms, swimming pools, universities. Why?

I know that some people in the orchestras and some singers have tested positive in Italy. I tested positive while performing “Aida” at La Scala. But it is normal if you test positive at work, you stay at home and quarantine.

This will do great damage.

Virginia Högl, who DJs under the name Virginia, described Germany’s new lockdown as “so much harder than the first.”Credit…Stephan Redel

At the start of October, I did two shows — each one outside, with everyone on the dance floor wearing masks. I was nervous, but after a couple of minutes it felt like always: The fun and excitement, you feel the bass through your body.

There was a thought in my mind: “I should enjoy it as much as I can. As it’s winter, it’s more likely there might be another lockdown.” And that’s exactly how it happened: A week later, my next show was canceled.

I’m still processing this lockdown as financial issues come up — it’s just so much harder than the first. A lot of people — promoters, artists, bar owners — have said they won’t be able to make it through a second phase, and it’s devastating.

I’m lucky as I have savings. I put money to the side just in case — not expecting this situation, obviously. I need to focus on the silver lining that is there. My motto for this moment is “One day at a time,” because otherwise I’ll go nuts.

“Our real problem is looking into the future,” said Tristram Hunt, the Victoria and Albert Museum director.Credit…David M. Benett/Getty Images

I’m feeling intense frustration. It’s another sense of loss of what could have been. Our exhibition on bags was supposed to open, our Raphael Court was planned to reopen, our Renaissance watercolors display was going to open — these lovely moments during the gloom of November.

The British government has been supportive this financial year, but our real problem is looking into the future, and this builds up more problems.

We’re already having to make the judgment calls on when everything reopens. We’re told the lockdown will only be for a month — until Dec. 2 — but it’s the hope that kills you.

We’re kind of back onto the global merry-go-round of changing exhibition timetables — all us directors sending each other letters saying, “We’re having to extend our show again,” or “We’re closed, but don’t worry we’re looking after your objects.” It’s actually very sweet. I got one from the Louvre yesterday, and the ones from Russia are particularly lovely, covered in lots of stamps — official embossed marks.

We’d gone through all our savings, so last week we sent out an email saying, “If you have the means to buy a Christmas present for someone on our website, it’d make a big difference to us.”

And the response was amazing — the phone’s been ringing, emails coming in — so it feels like a beehive here even though we’re closed.

It’s a real morale boost, because people are saying, “We want you to stay open.” In Paris, they’re talking about maybe letting bookshops reopen in two weeks. There’s been such a huge debate about it. Yesterday, we had François Hollande, the former president, come into the shop as he’d heard we were in trouble and he wanted to film a video calling for bookshops to be reopened. It was actually very moving what he said about how important reading is to society.

He didn’t buy anything, no.

It’s interesting the books people are buying. In the first confinement, people were buying a lot of pandemic books — “The Plague” by Camus — and this time people seem to be looking for escapism — sci-fi, Greek mythology. There’s less panic.

Michelle Willems dancing in “Sleeping Beauty” in October. “When will I perform again? That is the big question,” she said.Credit…Admill Kuyler/Ballett Zürich

I feel luckier than dancers anywhere else I know of now. Back in March, we had to completely stop working. I had to do exercises holding my kitchen table. But now, we can work 50 percent of normal. It means we can go into the studio for half of our normal hours, which is enough time to stay in shape, and for our bodies not to go up and down all the time.

We all have to wear masks, but we can touch, and dance with a partner.

A mask’s a bit difficult for the stamina and breathing, but I’m happy to wear it. I haven’t performed in a mask yet, but I feel the audience would miss a lot.

The government here hasn’t closed the theaters, but they said we can only perform for 50 people. And in a theater that normally has 1,250 people, that’s too big of a loss of money. I think it’s necessary to do this, because the numbers of coronavirus cases are growing immensely again, but there’s a lot of contradictions. People can still go to restaurants, and I don’t know how doing that is safer than going to a theater.

When will I perform again? That is the big question.

Israeli-Palestinian strife feeds a spate of anti-Semitic acts in Europe.