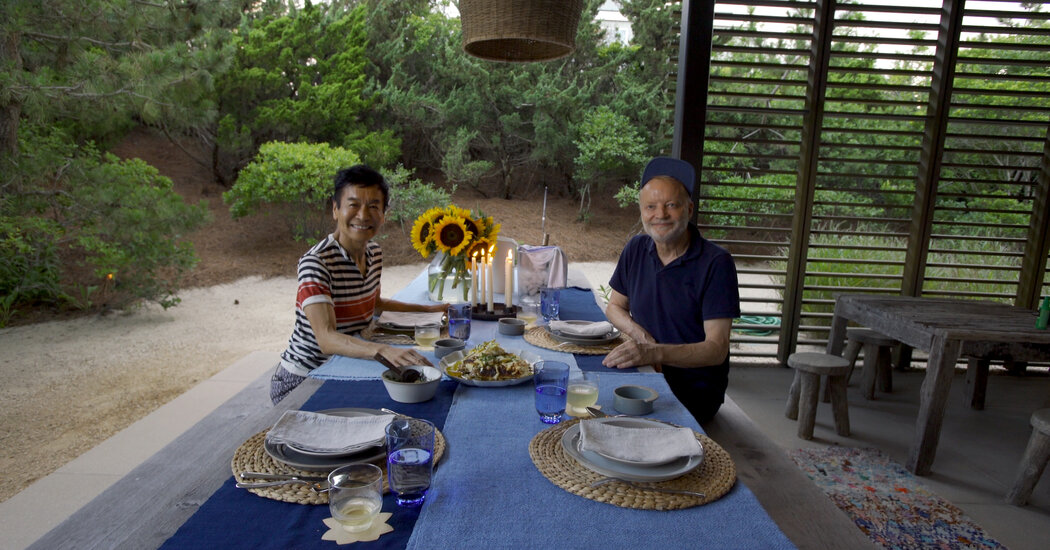 In the kitchen of their Amagansett, N.Y., home, designers George Yabu and Glenn Pushelberg prepare one of their favorite dishes, a summer halibut with fennel, olive and lemon chutney.

Hello, I’m George Yabu. And I’m Glenn Pushelberg. And we’re here at our summer home in Amagansett, right on the beach. And we’re here to show you one of our favorite dishes, summer halibut. What we wanted to create here is a very, very social space. Social kitchen. I want to be connected while I’m cooking in there. Make sure all the tools are handy. Halibut is a lovely, flaky dish. Each ingredient has its own character. Halibut fillets. 3 leeks, white and pale green parts only. 2 bulbs fennel. Half a cup unsalted butter. 3 tablespoons of virgin olive oil. The juice of 2 preserved lemons. Garlic. Basil. Salt. pepper. Marinating is very important because the density of halibut. It’s a cold water fish. It’s not as loose and light. We’re going to cook this relatively slowly and lowly for about 10 minutes until the leeks and the fennel get translucent. At the end of it, we’ll put some shallots in, because we don’t want them overcooked. We’re going to pop all of this in the oven. George has masterfully chopped up all of the ingredients for the chutney, and I shall assemble the chutney. 3/4 cup chopped fennel bulb. 8 large green olives. 4 preserved lemons. 3 tablespoons finely chopped flat leaf parsley. 6 tablespoons extra virgin olive oil. Juice of 2 lemons. Season to taste. And a shred of pepper. There we go, just to stir it up. When you’re getting ready to grill the fish, it’s important to get the pan hot first. Then add the oil to the pan when the pan is hot. And then put the fish in, then you’ll get this – Don’t let it smoke. Don’t let it smoke. George, let’s do this, all right? You’re down! Summer picnic! We’re gonna plate it here. It’s this balance between the kind of velvety leeks underneath, with the hot halibut. And then this cool zest of the lemon, lemon preserved chutney, which really feels like summer. Let’s eat, George. 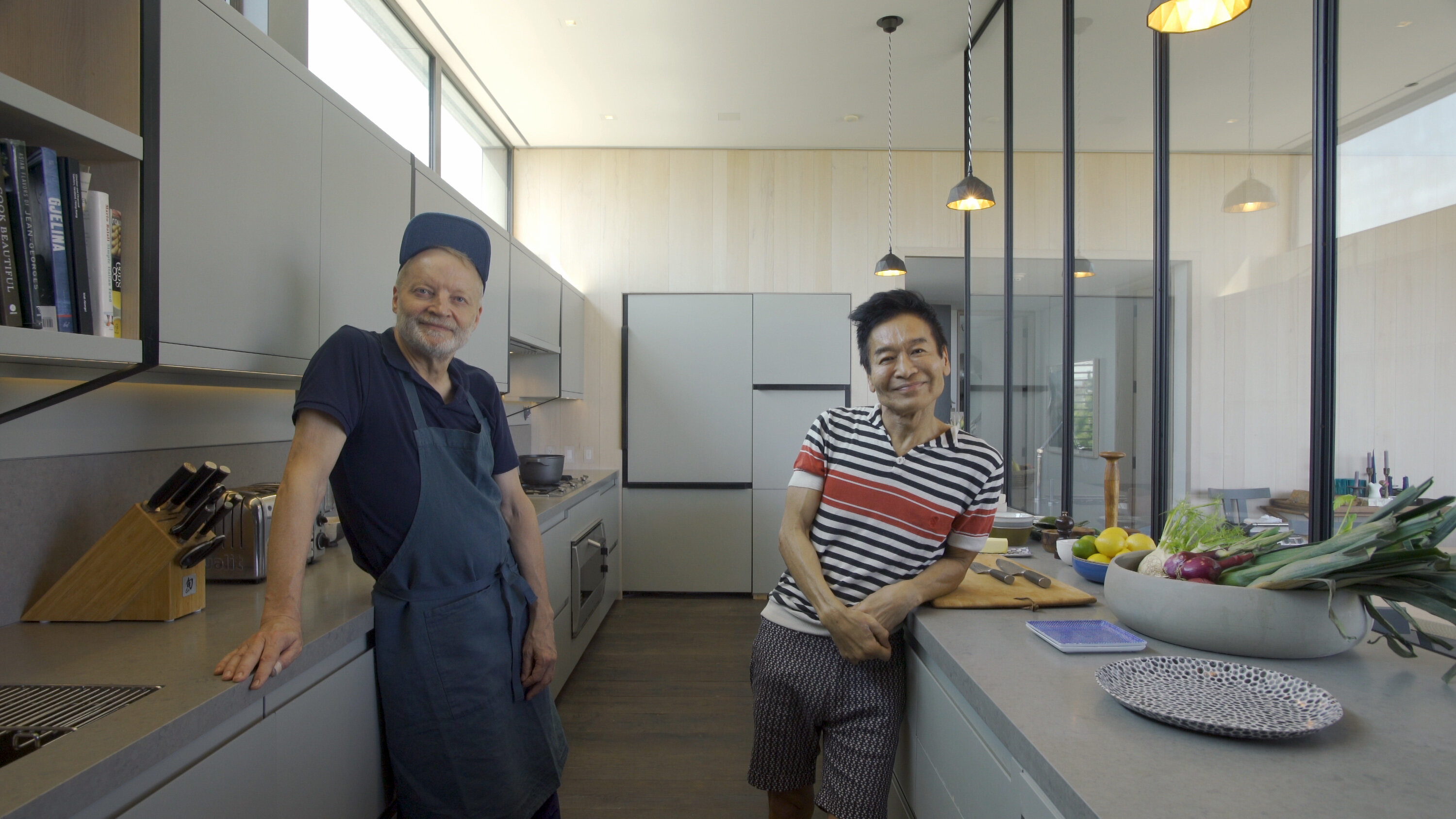 In the kitchen of their Amagansett, N.Y., home, designers George Yabu and Glenn Pushelberg prepare one of their favorite dishes, a summer halibut with fennel, olive and lemon chutney.CreditCredit…United Labor

The kitchen of Glenn Pushelberg and George Yabu’s spare, light-filled house in Amagansett, N.Y., is defined by glass. Five panels of the stuff separate the couple’s gray quartz-topped counters from the otherwise open-plan living and dining area on the home’s second floor; a particularly Covid-weary guest might mistake it for a high-concept sneeze guard. But for Yabu, who along with Pushelberg co-owns the architecture and design firm Yabu Pushelberg — perhaps best known for its projects with the Edition hotel group and Barneys New York — it was a necessary design choice to achieve the energy he craves when entertaining the guests that often fill the house.

“It keeps the conversations from interfering with each other, but you’re still engaged with your friends in the living room while you’re doing your thing in the kitchen,” Yabu explains. “You don’t want to disturb the chi of the socialization going on.” Pushelberg initially balked at the idea of making the kitchen so visible, but now enjoys the way visitors tend to congregate at this end of the house while he’s cooking.

At the far side of the room, wraparound floor-to-ceiling windows uninterrupted by columns offer a panoramic view of the Atlantic Ocean. While the building, whose structure comprises three stacked rectangular boxes, might look simple, it took the couple three and a half years to build; like many of their designs, it exemplifies the type of minimalism that conveys a sense of ease but requires inspired feats of engineering to create. “The most satisfying projects are your own,” Pushelberg says. “If you take your time, give some latitude to your schedule and your budget, and realize that you’re going to make a few little mistakes, it can be a very satisfying and happy experience.”

One of the couple’s favorite dishes to make here evolved at a similar pace. A few years back, they came across a recipe for a preserved lemon chutney that they started spooning over fish; later, they discovered a technique for slow-cooking onions and leeks until they’re velvety and rich. At some point, they combined the two and started adding olives. Now they have a bright, luscious fish dish, served on a bed of vegetables, that they adapt to the month: At the beginning of summer, they prepare it with cod, and in the later months, once the ocean waters have warmed, they get halibut from cooler waters, all under the guidance of Mike, their local fishmonger. And while it’s a meal that embodies the breezy simplicity of summer, it can hold its own all year long.

It’s also one that comes together without the need for gadgets or advanced techniques, thereby representing Yabu and Pushelberg’s lo-fi style of cooking: They typically prefer chopping ingredients by hand to using a food processor. But they do appreciate automation to an extent: With the push of a button, their slate-gray cupboards open all at once like a chorus line of garage doors. They also installed a dumbwaiter in the kitchen — another idea that Pushelberg was originally skeptical of. (“I hate that Leos always think they’re right, and that they usually are,” he says of his partner with a laugh.) It comes in handy when they serve dinner downstairs, on the long oak picnic table designed for them by the Dutch woodworking studio Van Rossum, which sits in the center of their ground-floor patio, surrounded by dunes on two sides. And as with their interiors, the couple values thoughtful simplicity at mealtimes. They’ll serve the fish with an unfussy heirloom tomato salad, or some fresh corn bought at a nearby farmstand — and, always, a good bottle of wine.

1. Pour the marinade ingredients over the fish, and let it sit in the fridge for 45 minutes.

2. Preheat the oven to 400 degrees. In a medium, oven-safe pot, melt the butter over medium heat and add the leeks and fennel, cooking them until translucent, about 10 minutes. Add the shallots and cook for a few more minutes, until they have softened. Place in the oven for 30 minutes.

3. Prepare the chutney by mixing together the olives, preserved lemon, parsley, olive oils, lemons, salt and pepper in a bowl.

4. Heat a pan over medium-high heat until it’s good and hot, but not smoking. Tip in the marinade from the plate of fish, then add the fish flesh-side down. Cook for 6-8 minutes on each side. Serve over the bed of cooked vegetables and top with chutney.