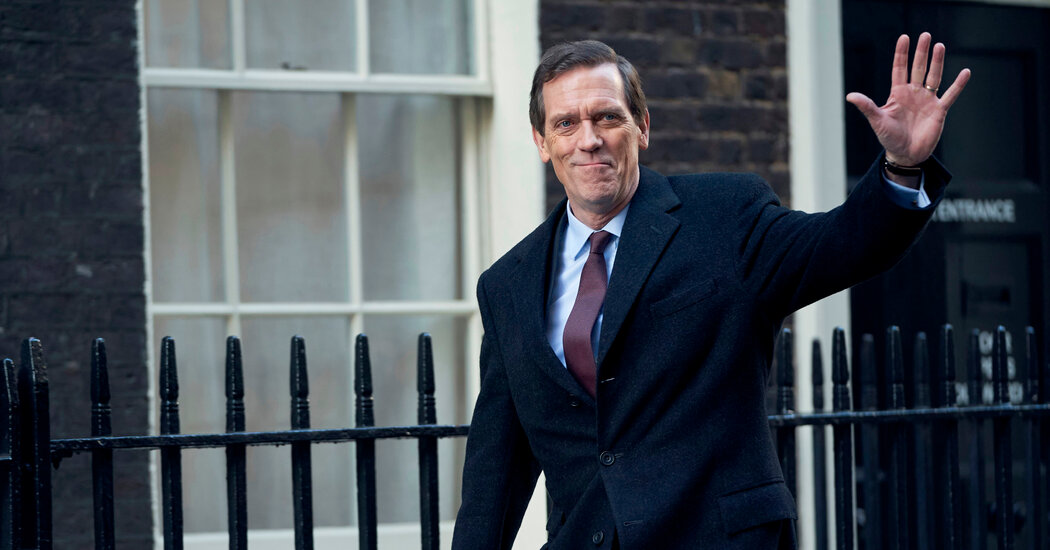 In PBS’s “Roadkill,” the star of “House” and “Veep” plays a brash British populist dealing with a lawsuit, a love child, a mistress and a suspicious prime minister.

In “Roadkill,” Hugh Laurie plays a British politician who sold furniture and real estate before becoming a member of Parliament.Credit…PBS, via Associated Press

Need to lend some charm, suavity and wry humanity to an otherwise objectionable middle-aged British male? Hugh Laurie is your man, filling that neo-George Sanders role in characters both mildly vainglorious (the spaceship captain of “Avenue 5”) and utterly despicable (the arms dealer of “The Night Manager”).

His latest, in the BBC mini-series “Roadkill” (beginning Sunday on PBS’s “Masterpiece”), falls somewhere in between, and trying to guess exactly where is our primary sport across the show’s four episodes. Peter Laurence may be a well-meaning, if destructively narcissistic, politician with a libertarian bent; he may be a soulless monster who doesn’t care about the bodies he leaves behind, perhaps literally, as he claws his way up the government. Laurie’s guarded, superbly understated performance keeps alive to the last moment the possibility that either, or both, might be true.

“Roadkill” was written by the British playwright David Hare, whose work — “Plenty,” “Via Dolorosa,” “Stuff Happens” — has always had a strong political component. In Britain, where it premiered two weeks ago, the show has been received and evaluated as a commentary on the ascendant Conservative Party, to which the fictional Laurence and his nemesis, an old-school prime minister (Helen McCrory), belong.

American viewers will make their own association. Laurence is a populist who sold furniture and real estate before becoming a member of Parliament; he rails against the political establishment while, behind the scenes, power brokers profit from the “turbulence” he causes. “You can get away with anything if you just brazen it out,” he says. And he also says, “People like me because I break the rules.”

The parallels to Donald Trump feel unmistakable. Laurence is much smoother and more concerned with putting on a show of concern, however. And crucially, his true motives aren’t on the surface, which is what makes it possible for “Roadkill” to be a drama rather than the kind of bald caricature that seems to be the only workable response to Trump.

“Roadkill” has elements of political satire and conspiracy thriller, but its dominant mode is a kind of melancholy, slow-moving farce. (Michael Keillor, a TV veteran whose credits encompass the soap opera “EastEnders” and the roller-coaster cop drama “Line of Duty,” directed all four episodes.) The series opens as Laurence wins a 1.5-million-pound judgment against a newspaper that accused him of corruption when he was health minister, before his current gig atop the transportation ministry.

The victory boosts his populist appeal, but a cascade of potentially career-ending crises immediately ensues. Hare populates the story with a long string of women who could trip up Laurence in one way or another, from the acerbic prime minister to the reporter whose career he ruined (Sarah Greene of “Dublin Murders”), his angry daughter (Millie Brady), his mistress (Sidse Babett Knudsen, star of “Borgen”), his disgruntled driver (Emma Cunniffe) and his lawyer (Pippa Bennett-Warner of “Gangs of London”), who wouldn’t be shocked to find out her client lied. Topping his list of female problems, though, is the anonymous inmate of a London prison who claims to be his unknown daughter.

As an increasingly frantic Laurence juggles his personal and political challenges, Hare deftly weaves the strands together, and the later episodes offer satisfying moments of congruence and payback. Laurence has a genius for dancing above the chaos, though, and as he fails upward, what is comic in form can feel tragic in substance — or at least unresolved and menacing. However many human obstacles Hare throws in Laurence’s way, they all have a tendency to end up as collateral damage.

Laurie dominates the screen time and defines the mood, but he’s helped by a deep bench of old pros, including the razor-sharp McCrory, Pip Torrens as the newspaper’s editor and Patricia Hodge as its owner and Saskia Reeves as Laurence’s choir-director wife, who seems out of her depth but possesses unsuspected layers of cunning.

Not every detail of the series’s social and political intrigue makes sense, especially with regard to the newspaper business. (Would even a Fleet Street rag go big with a story based on a reporter’s hearsay account of a diary she can’t produce?) The human side of the equation mostly adds up, though, and Laurie nails the contradictions of Laurence, who tries kindness on for size but only to see whether it fits with his consuming ambition. As Laurence tests spins on whoever happens to be in front of him, or struggles to control his glee as the prime minister dangles a promotion, Laurie wholly inhabits a man who’s all too comfortable in his own skin.