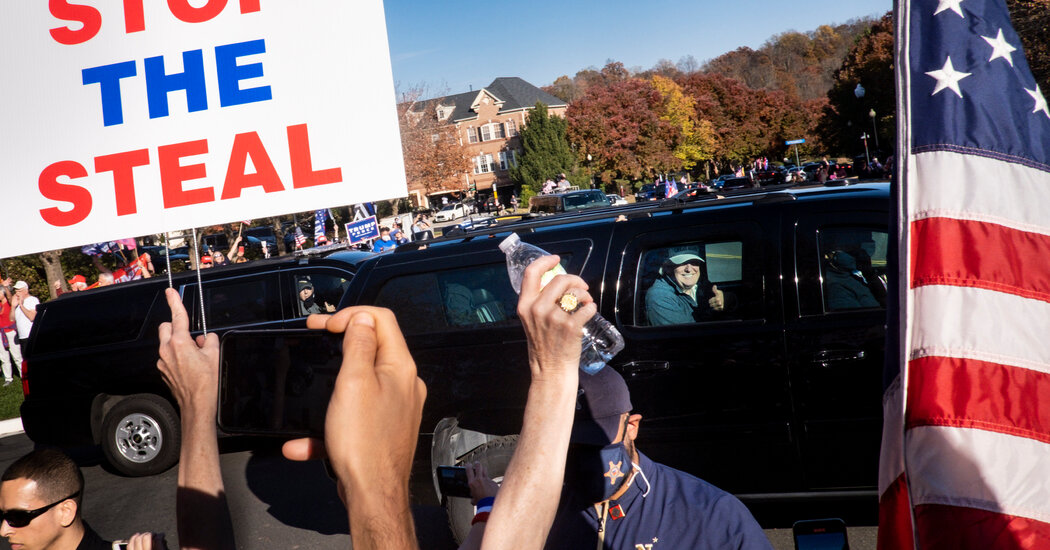 The top Senate Republican issued no statement congratulating President-elect Biden, while a leading House Republican echoed President Trump’s protestations that the election was not, in fact, over.

Supporters of President Trump lining up outside Trump National Gulf Club on Saturday as he left the course. Shortly after his arrival there, news organizations declared that he had lost the presidency to Joseph R. Biden Jr.Credit…Pete Marovich for The New York Times

WASHINGTON — As President Trump refused to concede defeat on Saturday, top Republican congressional leaders followed suit, refraining from releasing the customary statements congratulating the victor that have been standard among senior lawmakers in both parties when a presidential election has been declared.

Senator Mitch McConnell, the majority leader and Republican of Kentucky, declined on Saturday to acknowledge Joseph R. Biden Jr.’s victory, with an aide instead pointing reporters to a generic “count all the votes” statement Mr. McConnell released on Friday before the results were known.

In that statement, released on Twitter as Mr. Trump preemptively contested the outcome of the election, Mr. McConnell had outlined “how this must work in our great country.” “Every legal vote should be counted,” he said. “Any illegally-submitted ballots must not. All sides must get to observe the process. And the courts are here to apply the laws & resolve disputes.”

“That’s how Americans’ votes decide the result,” he said.

His silence on Saturday came as other Republican leaders also kept mum about the results, and some openly questioned it.

“The election isn’t over until all legal votes are counted and certified,” Representative Steve Scalise of Louisiana, the second-ranking Republican, said on Twitter. “There are still serious legal challenges that have been made, and until that process is resolved, the election is not final. The American people deserve a fair and transparent process.”

The reactions suggested that Republicans on Capitol Hill, who have spent four years clinging tightly to Mr. Trump or at least have avoided publicly countering him for fear of provoking an angry tweet, were sticking to those approaches even after his loss.

In the weeks leading up to the election, as Mr. Trump refused to commit to a peaceful transfer of power, some Republicans including Mr. McConnell gently pushed back without directly rebuking the president, making it clear that if he were to lose, they expected him to abide by the results. “The winner of the November 3rd election will be inaugurated on January 20th,” Mr. McConnell said then. “There will be an orderly transition just as there has been every four years since 1792.”

But Mr. Trump’s reluctance to accept his defeat, and his angry, and false, insistence on Saturday that he had in fact won raised questions about whether any senior Republican would be willing to contradict him.

Only a handful of rank-and-file Republicans, including some who are not likely to face voters again, offered their good wishes for Mr. Biden.

“It’s time to come together,” wrote Representative Will Hurd, Republican of Texas, who is retiring. “America has spoken and we must respect the decision. More unites us than divides us; we can find common ground. I hope the president-elect can embody this. I wish him good luck and I wish the president a successful final few weeks.”

Senator Mitt Romney of Utah, the 2012 Republican presidential nominee and a frequent critic of Mr. Trump, also offered a traditional statement of well wishes to the victor, and was one of the few members of his party to refer to Mr. Biden by his new title.

“Ann and I extend our congratulations to President-elect Joe Biden and Vice President-elect Kamala Harris,” he wrote on Twitter. “We know both of them as people of good will and admirable character. We pray that God may bless them in the days and years ahead.”

Senator Lisa Murkowski of Alaska also directly congratulated Mr. Biden as president-elect and said “it appears we will soon then to the peaceful transition of power, which is fundamental to our system of democracy and ultimately honors the American people.” She added, “Honoring their choice in who leads has always defined us and is the source of our exceptionalism.”

But several Republicans who are regarded as rising stars in the party said any congratulations were premature, portraying the election results as a creation of the news media and alluding to the possibility of legal action that could change them.

“The media do not get to determine who the president is,” said Senator Josh Hawley, Republican of Missouri. “The people do. When all lawful votes have been counted, recounts finished, and allegations of fraud addressed, we will know who the winner is.”

Senator Patrick J. Toomey, Republican of Pennsylvania, who has announced he is retiring, issued a statement congratulating both Mr. Trump and Mr. Biden for having “run hard, spirited campaigns that have inspired record civic engagement.” But he said that given the closeness of the results, Americans needed assurances that the election was “being conducted with integrity,”

“Today’s announcement by the media of the election’s outcome is a projection,” Mr. Toomey said. “A final outcome will be reached when the election process concludes, which is after all legal votes have been counted, litigation is resolved, and any recounts are completed.”

Representative Mike Johnson, Republican of Louisiana and a contender for a leadership position in his party, said on Twitter he called Mr. Trump and encouraged him to “Stay strong and keep fighting, sir!”

“The nation is depending upon your resolve,” Mr. Johnson said he told the president. “We must exhaust every available legal remedy to restore Americans’ trust in the fairness of our election system.”

Social in nature, wanderer by habit

A Tale Old and New as Another Royal Wife Breaks Free