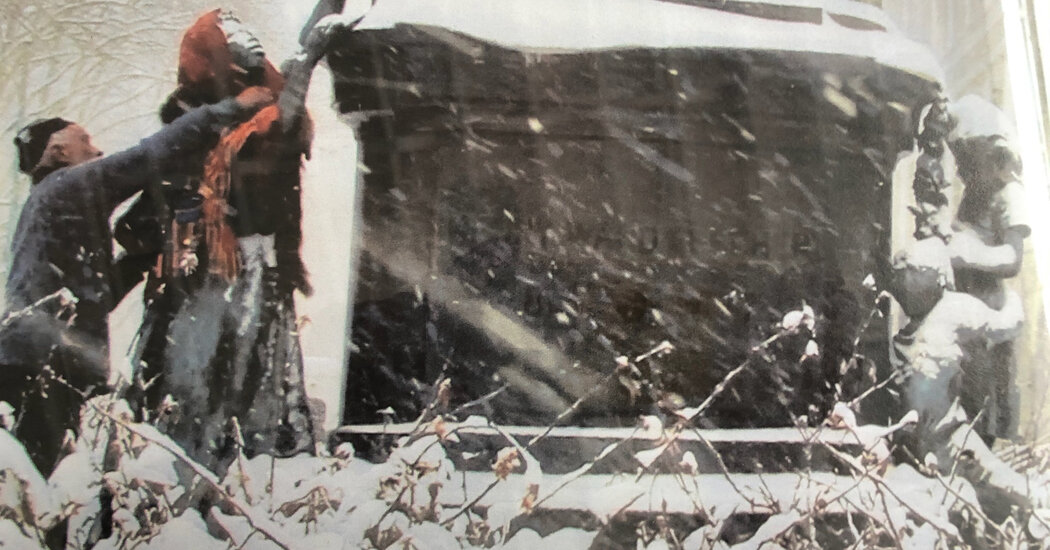 A photo of an unnamed performance by David Hammons in Brooklyn, New York.Credit…Courtesy of David Hammons. Photo: A Thousand Pictures.

In each installment of The Artists, T highlights a recent or little-shown work. This week, we’re looking at a previously unpublished photo of an untitled performance by David Hammons involving the Henry Ward Beecher Monument in Brooklyn, New York. Normally, the artist would offer a few words putting the work in context, but since Hammons does not, as a general rule, do interviews, the person with whom the artist shared this work, Daniel S. Palmer, a curator for New York’s Public Art Fund, takes us through the piece.

During a series of telephone conversations I’ve been having with David Hammons (b. 1943, Springfield, Ill.) about this country’s problematic monuments, he calmly mentioned: “Sometimes I put clothes on the sculptures.” This quizzical response didn’t seem typical of the prevailing sense of frustration that I and many others have toward the many remaining public sculptures that celebrate racist, genocidal and generally fraught individuals, or that depict other figures in an insensitive manner. Nor did it express the widespread disappointment that many feel toward the inaction of officials to do anything about these sculptures, which has led to their unsanctioned destruction.

Then Hammons showed me what he meant, sharing this previously unpublished, untitled artwork from around 2007. It is exactly what he described: an image of him in a blue sweater and black hat wrapping his red-and-orange scarf around the head of a bronze sculpture of a Black woman standing on the base of the Henry Ward Beecher Monument in Brooklyn’s Columbus Park during a snowstorm, an action he says he repeated each winter for five or so years. Sculpted by John Quincy Adams Ward in 1891 to commemorate Beecher, the abolitionist who worked so tirelessly to end slavery, the monument centers on a standing, over-lifesize bronze statue of the heavily cloaked preacher (he is wearing at least four layers of coats). Below, on the granite base by the architect Richard Morris Hunt, the monument also includes a pair of children on one side and, on the other, a freed, formerly enslaved woman placing a palm frond at Beecher’s feet to represent his triumphant efforts in emancipation. Hammons putting winter clothes on the Black figure is a contextualizing, humanizing gesture that asks us to scrutinize this monument and its place in history. It is a far more nuanced, but no less biting, interpretation of public monuments than is usual.

Additionally, this action fits perfectly within his oeuvre. It is as enigmatic as the best of his works, many of which likewise make use of public space in New York. It echoes the wintertime ephemerality of one of his most well-known pieces, “Bliz-aard Ball Sale” (1983), in which the artist sold freshly made snowballs at Astor Place in front of Cooper Union after a blizzard. And its location in one of the parks along Cadman Plaza in Downtown Brooklyn links it to the site of his 1986 Public Art Fund installation “Higher Goals,” in which Hammons constructed impossibly tall basketball hoops, ranging in height from 20 to 30 feet — a comment on both the colossal expectations and limited possibilities for people of color.

Reflecting on the current moment, he felt that it was the perfect time to share this never-before-seen work, perhaps partly as a way to lend another mode of questioning to the current cultural conversation. The power in Hammons’s action stems from his addressing the bigoted 19th-century norms about how the figure of the freed slave was represented. Beyond the racist hierarchical arrangement of the monument that situates her at the feet of the “great (white) man,” looking up for his approval, she is depicted in loosefitting, threadbare clothes, and is barefoot, too. During snowstorms like the one Hammons encountered that winter, she is exposed and vulnerable, while Ward is protected from the elements. This contrast is why Hammons’s action is so powerful. He explicitly articulates the fact that her Black body matters and is worth caring for. This is the same type of statement that has been made in recent protests, and is even something that Ward’s actions during his lifetime affirmed. However, Hammons reveals how the monument neglects to appropriately convey this truth and how this failure is reiterated with every snowstorm she is forced to endure.

A Powerful Reporter Got Away With Sexual Misconduct for Decades. His Paper, and His Union, Looked the Other Way.

How Can I Make a Home After Moving Again?