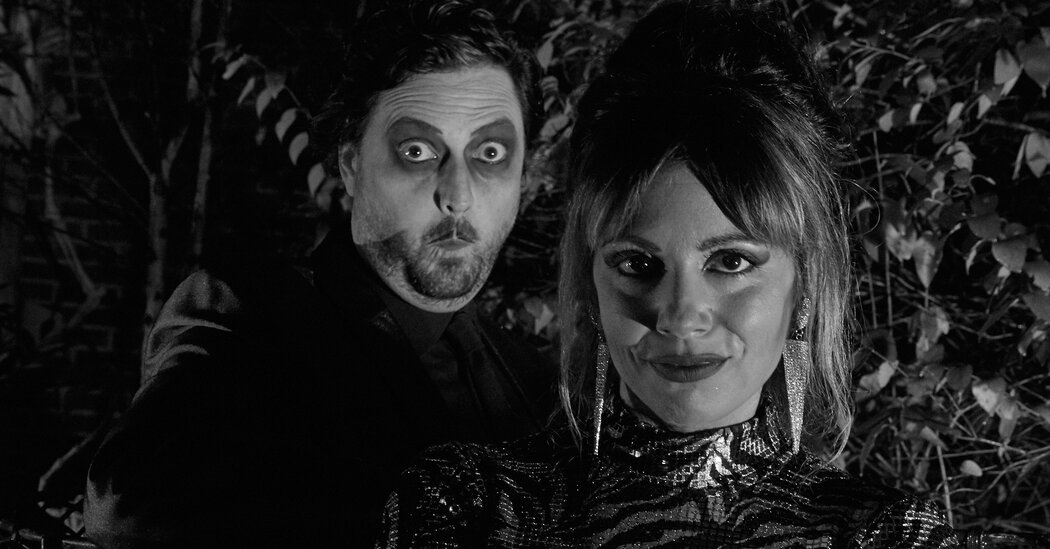 Zachariah Durr and Laura Wimbels are the horror hosts Leopold and Lenora on “The Big Bad B-Movie Show,” a new local series in Cleveland that evokes one of TV’s oldest traditions.Credit…Da’Shaunae Marisa for The New York Times

Vampires, demons, Michael Myers — in horror, many things never die. One Cleveland television station is betting there’s something else that’s immortal: the appetite for horror hosts.

Halloween night brings the third episode of “The Big Bad B-Movie Show,” a new locally-produced schlock horror movie series on CW43, the city’s CW affiliate. It’s hosted by Zachariah Durr, 40, and Laura Wimbels, 37, who play Leopold and Lenora, two dapper, wisecracking ghouls trapped in a vault. The two are part of a new generation of horror hosts, those late-night cheeseball M.C.s who supplement terrible movies with wink-wink sketch comedy and goofy gags, delivered in accents that land somewhere between Transylvania and the Catskills.

What’s unusual about “The Big Bad B-Movie Show” is more than just “the two weirdo people” who host it, as Durr put it. Most horror hosts today stream exclusively online, and it’s usually too costly for a local broadcast station to produce a new weekly horror series. (It also streams online after the broadcast concludes.) But in Durr, a video producer for CW43, the station lucked out: He eagerly agreed to host the series as a labor of love.

“We are all trapped in our cities,” he said. “We might as well be producing something fun.”

Horror hosts have been (mildly) scaring fans since the 1950s, first on broadcast television and then online, where they remain ubiquitous. The formula — a hammy host, a B movie, hokey skits — has barely changed. Neither, really, have gender roles; men are generally funny, women are usually vamps.

This Halloween, Leopold and Lenora are two of many horror hosts helping to feed the pandemic-bred appetite for nostalgic comfort viewing, a welcome distraction for families with kids who will spend Halloween at home because of coronavirus restrictions.

In Austin, Tex., Joseph Fotinos, a local host known as Professor Anton Griffin, kicks things off with an after-midnight special in the wee hours of Halloween morning on the city’s CBS affiliate. In the Quad Cities market, covering southeastern Iowa and northwestern Illinois, Marlena Midnite will host a Halloween night double feature of “The Brain That Wouldn’t Die” (1962) and “Lady Frankenstein” (1971) on a MyTV station.

Image “Horror hosts show you comforting things from your childhood,” said Cassandra Peterson, who as Elvira rejuvenated the genre in the 1980s.Credit…Mary-Ann Halpin

“Horror hosts show you comforting things from your childhood that you watched with your family or friends,” she said. “That those things have horror themes is neither here nor there. It just feels good to go back to that place.”

According to Stacey Abbott, the co-author of “TV Horror: Investigating the Dark Side of the Small Screen,” the horror host format emerged as local stations in search of cheap content bought packages of old Hollywood horror movies to create a programming slot with minimal production costs. Station employees were often enlisted to moonlight as costumed creatures after their evening shifts ended.

“It made more of an event of screening old movies, and it worked really well,” Abbott said.

The format first clicked in 1954, when a young Finnish-American actress named Maila Nurmi squeezed into a cinched black dress and applied a crimson lip to become Vampira, a va-va-voom bloodsucker on KABC in Los Angeles. Three years later, John Zacherle played an undertaker host on TV in Philadelphia, where he was known as Roland, and later in New York, where he took the name Zacherley.

The phenomenon took off in other cities, where hosts became local celebrities. In 2011, the first class in the virtual Horror Host Hall of Fame included three personalities from Ohio alone, including Cleveland’s Ghoulardi, played by Ernie Anderson, the father of the acclaimed filmmaker Paul Thomas Anderson (“There Will Be Blood,” “Phantom Thread”).

Abbott said the format started to peter out in the 1970s as stations moved toward more syndicated content and away from paying people to make original shows. But that changed in the ’80s, when Elvira helped usher in a new Golden Age by introducing the VHS generation to the horror host format in her show “Movie Macabre.” The gig helped make her a household name. Fast forward to the digital age, and anyone with a laptop, green screen, vintage frippery and pancake makeup can have his or her own series.

A few long-timers are still at it. Joe Bob Briggs, a noncreature host, has a series on the horror streaming platform Shudder. Dick Dyszel has played Count Gore De Vol, a love child of Bela Lugosi and Sid Caesar, since the 1970s and has been online since the early days of the internet. Svengoolie, a long-running Chicago horror host originated by Jerry G. Bishop and now played by Rich Koz, has a weekly show on MeTV stations that, according to the network, reaches an average three million viewers each week.

Horror hosts also have a documentary about their weird world, “American Scary,” streaming on Amazon, and a virtual meeting place at EerieLateNight.com, where horror hosts and their fans chat and watch old horror movies around the clock.

What they don’t have is women and people of color as hosts, at least not in the numbers that reflect the diversity of horror fandom. CW43’s Wimbels, a freelance photographer who is Hispanic and grew up in Cleveland, said she was thrilled to expand even slightly the small circle of female hosts of color.

“I was one of the uncool kids,” she said. “Growing up, I was dark and stuck out like a sore thumb. I was adopted. We didn’t have cable. But I watched ‘The Twilight Zone’ and old movies and TV shows, and they gave me comfort. To get to be a horror host — it’s incredible.”

“We asked ourselves, do we show repeats or something creative?” he said. “We went for the creative angle because we believe that advertisers are going to be interested in something locally produced that has an original energy.”

Schrader said he had been looking for locally-produced programming when the opportunity to buy some old horror movies came across his desk. A fan of “Mystery Science Theater 3000,” he gave “The Big Bad B-Movie Show” a greenlight because the idea was a hit at the station and because the production costs were “not going to rival ‘Star Wars.’” The set — a deliberately cheap-looking basement vault — is a storage room.

That CW43 is willing to spend even a dime on a new scripted show during a time of considerable revenue instability attests to the enduring appeal of the horror host format, nearly 70 years after its birth.

So far, the gamble seems to have paid off. Schrader said that the preliminary ratings for the first episode of “The Big Bad B-Movie Show” were higher than expected. Audience feedback has been positive. His boss is happy. Like the undead, viewers have a hunger for more.

“People are rooting for it,” he said of the show. “I hope it’s around for a good, long while.”