The British Design Legend Known for Tailoring With a Twist 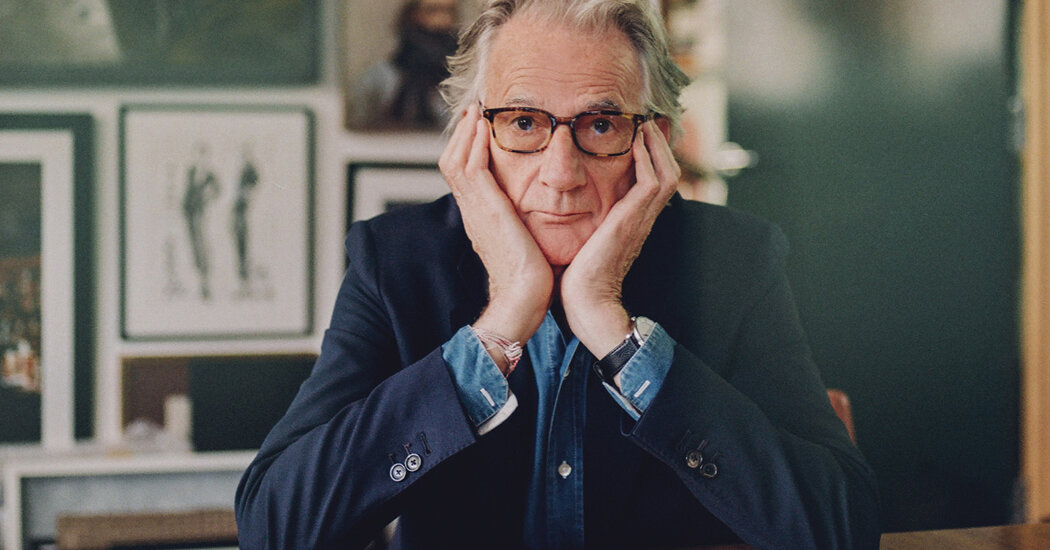 “My childhood was very gentle,” says the designer Paul Smith, who grew up in Nottinghamshire, England, the youngest of three children by eight years. “My mother rather beautifully told me, ‘Darling, you were a gift from God’ — a very polite way of saying I was a mistake,” adds Smith, 74, who is similarly well mannered. With his siblings already out of the house, Smith spent his adolescent years luxuriating in the company of his parents, snapping photographs that he’d develop with his father in the family attic and taking long bike rides through the Midlands. At 15, he left school intent on becoming a professional cyclist, but was forced to give up the pursuit after suffering a bad crash two years later, at which point he started spending weekends in London, hanging out with an art and music school crowd that opened his eyes to the cultural currents of the 1960s. Often, he’d go to concerts and hawk homemade silk-screened T-shirts he’d made to whomever was performing (Rod Stewart, Eric Clapton) and use some of his earnings to pay for the gas to get home. “I came from a working-class family and I had no money, no education,” says Smith. “I had to make it work, and I liked clothes.”

He liked them enough that in 1970, with the encouragement, guidance and help of Pauline Denyer, his then girlfriend and now wife, who studied fashion at the Royal College of Art, Smith opened a windowless shop, just under 10 feet by 10 feet, in his hometown. On the racks were some of his own designs, such as double-breasted flannel coats with pearl buttons and flared corduroy trousers with cuffed hems. “Pauline was the one who first taught me how to cut a pattern,” says Smith, who showed his eponymous brand’s first full men’s wear collection in Paris in 1976 and was immediately heralded for his irreverent take on suiting. An affinity for stripes and various sartorial winks, such as a loud lining on a jacket or brightly colored stitching around a buttonhole, have remained trademarks of his ever since, and he’s become a stalwart of U.K. fashion, with outposts in 70 countries. Though expertly crafted from the finest of textiles, his work is a reminder that tailoring need not be stuffy, and his spring 2021 collection, which he presented last month, showing two-button, wool-mix suits in lavender and mint worn with sandals and without shirts, was no exception. It was inspired by a past trip to Havana, something that wouldn’t be so easy at the moment. But while it’s been a difficult year, what with the pandemic and much social strife, it’s also been a special one for Smith, as 2020 constitutes his brand’s 50th anniversary, which he’s marking with a monograph, out this week, that details his life and career through 50 of his favorite objects. Here, the designer elaborates on the elements of his style and singular approach to running his brand, which he’s proud to have kept independent. “We’ve just always enjoyed having a lovely day every day, saying please and thank you, and not being part of a big machine,” he says.

At top: This portrait of me was taken last year in my office in central London by a photographer called Jonathan Pryce. There’s an Yves Saint Laurent illustration behind me, and you can also see a corner of a larger work by the artist James Lloyd, who, in the mid-90s, was one of the first recipients of the Paul Smith Scholarship at the Slade School of Fine Art. He went on to become quite a big name and was actually commissioned to paint me by the National Portrait Gallery. They didn’t know about the scholarship, so that was quite charming.

Left: Here I am in my school uniform, age 5 or 6. Because my brother and sister were older, I grew up almost like an only child. My father was an amateur photographer and bought me a camera when I was 11 — I didn’t want to waste film, so it really made me learn how to look and see, which has certainly helped me in my career. He was also a warm and funny man, one who, even when he died at 94, had a lot of young friends, a testament to his openness and ability to connect, which is something else he taught me.

Right: I love Japan and have been traveling there since the early 1980s. One of my favorite things to do in Tokyo — at four in the morning when I’m jet-lagged — is go to the fish market. This bag, from our spring 2018 collection and printed with a mackerel, was an homage to that tradition. I have many shops in Japan and I think my success there goes back to my dad, who was able to communicate even without words. In the early days, there was only one employee at Paul Smith Japan who spoke English, so we had to find other ways to understand each other, though I’ve also learned a few Japanese words and phrases over the years.

Left: When we sat down 15 years ago to plan out our flagship Los Angeles shop and I said, “Why don’t we do it in bright pink?” I had no idea it would become such a sensation. Apparently, it’s one of the most Instagrammed buildings in L.A. I did want to make it a place that would really make you want to stop, especially because everyone there drives everywhere, but I was thinking more about the Mexican architect Luis Barragán, who is one of my heroes, and who gravitated to punchy colors.

Center: Once, while I was daydreaming on a train from London to Nottingham, the friend I was with asked me what I was looking for out the window and I responded, just for fun, “If I see a rabbit, then my next collection will do well.” A bit later, when he was back in New York, he sent me a papier-mâché rabbit in the post, and, though I’m not a superstitious person, it just became a thing. For many, many years since, my wife has given me some kind of rabbit for good luck with every new collection. I have the most beautiful collection of Austrian bronze ones, and this purple ceramic rabbit is one we used to sell in some of my shops.

Right: This is of me and Pauline in Italy in the mid-1970s. When we met, I was 21 and she was 27 and already had two young sons — this photo was taken by her older son, Jason. We’ve been together since 1967, and she was instrumental to the brand’s early success, but we only got married in 2000, not for any good reason — we just didn’t get around to it until we did. In the lead-up to the wedding, I got a letter from Buckingham Palace saying they wanted to make me a knight, and it turned out the ceremony was on the same day. I got knighted at 11 a.m. and married at 4 p.m., and Pauline became Mrs. Smith and Lady Smith all in one day.

People often ask me how British Paul Smith is. In the beginning, it was very British in that the fabrics available to a young designer just starting out were quite local. Today, we retain a bit of that history: This look from my fall 2020 collection (right) shows a short jacket and coat in a contemporary high-tech fabric, but one featuring a very traditional houndstooth check. I first started designing women’s wear in 1993, after learning women were coming into my shops and buying things for themselves, and on the left is a women’s look from my fall 2018 collection, which was inspired by the 1915 book “Dreamer of Dreams,” written by Marie, the Queen of Romania, and illustrated by Edmund Dulac. He created these whimsical drawings of forests, moonscapes and other mysterious settings, and we reinterpreted and transposed them onto knitwear.

Left: I’ve visited almost all of Christo and Jeanne-Claude’s big installations around the world and am drawn to the oddness of wrapping a building or putting a curtain across a valley or what have you. It represents an unusual way of thinking about things, and I’ve always tried to do something similar with my brand, bringing unexpected elements together. Now it’s completely normal to pair a denim shirt with a cashmere suit, or a flower tie with a floral shirt, but in the 1970s, it was considered outrageous. The other reason I love Christo and Jeanne-Claude’s work is that you don’t just say, “I’m going to wrap the Reichstag,” as they did in 1995. There is paperwork, financing, organization — and so there is also a lot of willpower.

Right: Apparently, and completely unbeknown to me at the time, I was a bit of a pioneer in terms of printing photographs onto fabrics, which I started doing in the 1980s — I did apples, flowers, plates of spaghetti, all sorts of things. For our anniversary this year, we revisited the archives and created a capsule collection of some key printed styles, and this loafer has proved very popular.

Left: Alexey Brodovitch was the art director of Harper’s Bazaar from the 1930s through the late 1950s and such a radical, lateral thinker — he brought Richard Avedon and Andy Warhol into the fold there. This is a hell of a cover. It’s from August 1940 but just so modern.

Right: I live a four-minute walk from London’s Holland Park, and Pauline and I regularly pop our heads into its Kyoto Garden, which reminds me of my visits to Japan. We go to the garden to clear our heads. Though in a way we’re already at peace — one of the joys of being with Pauline is that we’re completely comfortable with silence and just very much at ease with each other.

Left: Mario Bellini for Cassina Cab Chairs, which were designed in the late 1970s, sit around this long table in my London office. They’re made from thick leather that zips around the frame, so each one is like a piece of clothing — maybe a beloved pair of jeans that gets better with every wear.

Right: During my early trips to Japan, I’d go for two weeks and have time to explore. I loved popping into antiques shops, where I would admire the old workwear made out of thick cotton fabric and dyed with indigo to repel mosquitoes. These were garments that, for a time, anyway, were not replaced but repaired. A lot of them were darned using decorative Sashiko stitching, which inspired me to create a series of my own pieces, including this pair of jeans from the late 1990s, with built-in repairs.

A Guaranteed Monthly Check Changed His Life. Now He Sends Out 650.

Norway Has a Must-See Team. Barely Anyone Can Watch It.