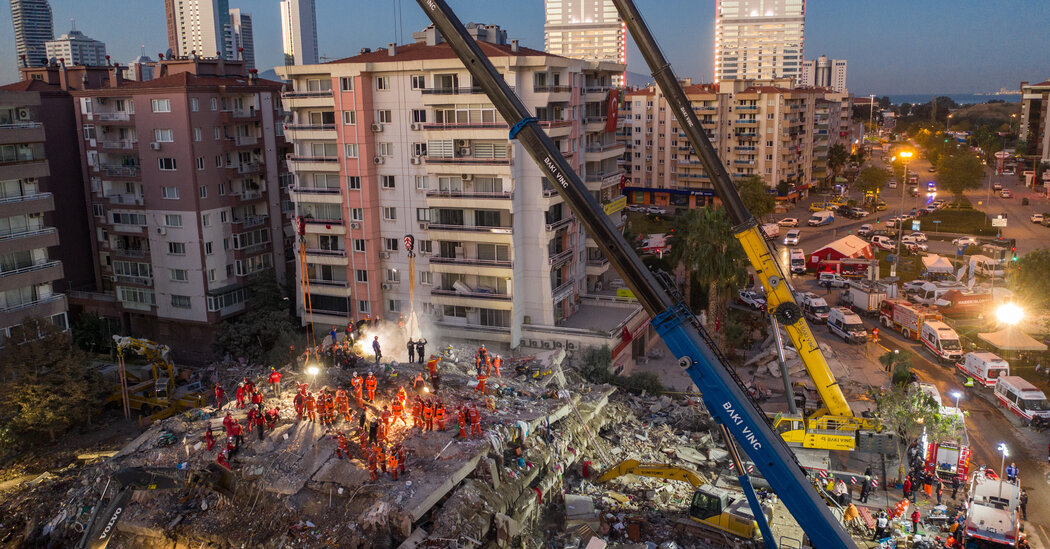 After the deadly tremor rocked the country’s western coast, razing buildings in the city of Izmir and killing dozens of people, hope began to fade for some of those still trapped under the rubble.

Search efforts amid the ruins of an eight-story building in Izmir, Turkey, on Sunday.Credit…Burak Kara/Getty Images

By The New York Times

The death toll from a major earthquake off the coast of Turkey reached at least 62 on Sunday, with more than 900 others injured, as rescuers continued to dig through tons of rubble in the city of Izmir in the diminishing hope of finding more survivors.

The magnitude 7.0 tremor, centered in the Aegean Sea, hit Friday afternoon, rocking Izmir, a city in western Turkey that is the country’s third-most populous, after Istanbul and the capital, Ankara. As well as at least 58 deaths in Turkey, at least two more people were killed on the Greek island of Samos, the authorities there said.

Anxious family members of those still missing kept vigil around the wrecked husks of buildings they had called home just a few days ago, many of them wailing in agony as they prayed for the best and feared for the worst.

Along with the devastation in Izmir, the quake created a small tsunami about 30 miles to the southwest in the area of Sigacik, a coastal town around 10 miles from the epicenter.

An aid operation included the dispatch of thousands of tents, beds and blankets to the area for survivors who had lost their homes or were unable to return to their buildings as powerful aftershocks reverberated.

Image Family members waited for news about missing relatives in Izmir on Sunday.Credit…Erdem Sahin/EPA, via Shutterstock

Observing rescue attempts in Izmir, the Turkish health minister, Fahrettin Koca, told reporters that eight people injured by the quake were in intensive care, three of them in critical condition. He said it was difficult to say how many more might still be trapped.

“We have estimates, but I don’t want to share them to avoid speculation,” he said.

Some of the worst damage was in Bayrakli, a central district of Izmir. In one building, rescuers recovered the bodies of three members of a family on Sunday morning, including a toddler.

One rescue worker, Tahsin Kaymak, who was part of the team that found the family, slumped nearby in tears.

“We found them trapped,” Mr. Kaymak said in a TV interview. “I don’t think I am able to describe how I felt at that moment.”

“Bodies passing from one hand to another, touching your hand too,” he added. “It was a 2-year-old child.”

Some were luckier. Ahmet Citim, 70, was pulled alive from the ruins of another building about 33 hours after the tremor, TV footage showed. He was in stable condition, Mr. Koca, the health minister, noted on Twitter.

Rescue workers said the building that Mr. Citim was pulled from had collapsed in a way that had increased the chances of finding people alive, with the structure creating spaces for people to survive in as it tumbled.

But Basaran Aksu, who was leading a team of miners involved in the rescue work, said that a building where his group had been working had disintegrated, leaving little hope that anyone inside would be found alive.

Removing a victim on Sunday. Some buildings in Izmir collapsed so quickly that those inside had little chance of escape.Credit…Yasin Akgul/Agence France-Presse — Getty Images

“It was a horrible structure. It collapsed so quickly that people had no chance of escape,” he said.

“When you press a pillar, one of the units that should have been the strongest, it turns into dust,” Mr. Aksu said in a phone interview, referring to the building’s construction. “It was a very difficult mission. We worked nonstop.”

Although shaken often by tremors, Izmir has many older buildings that are not quake-resistant. Earthquakes often show up the poor construction quality in Turkey, with some structures toppling easily, while others — sometimes right next door — remain largely unaffected.

A total of 16 bodies were recovered from the building where Mr. Aksu’s team had been working. He estimated that 15 others might still be under the debris.

So far, at least 104 people have been pulled from ruins alive, officials said. Mr. Koca praised the dedication of those involved in the search.

“Our rescue workers are in an extraordinary effort,” Mr. Koca said. “This work is ongoing round the clock.”

This 10-Year-Old Walked 1,700 Miles With His Dad from Italy to England For a Hug With Grandma