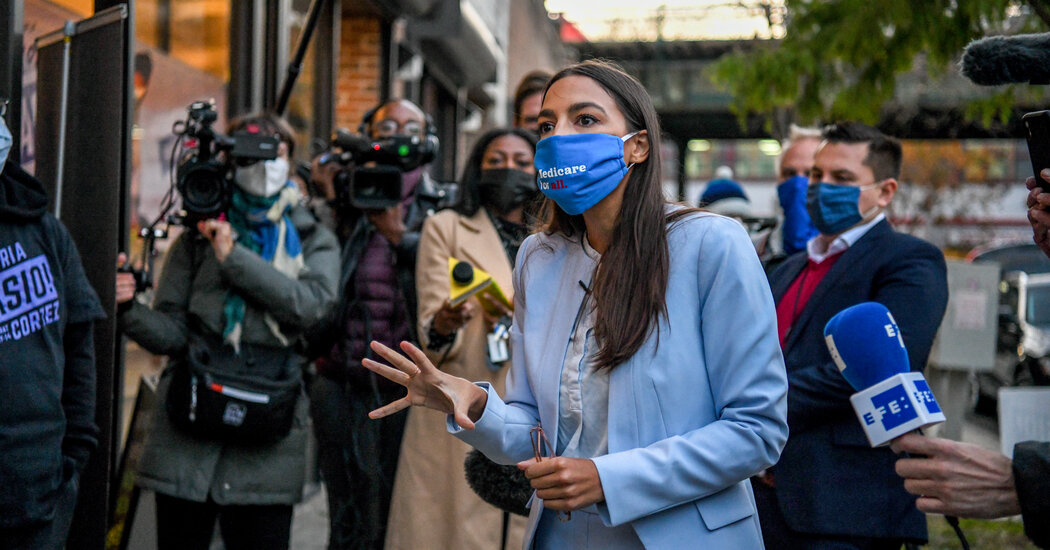 The congresswoman said Joe Biden’s relationship with progressives would hinge on his actions. And she dismissed criticism from House moderates, calling some candidates who lost their races “sitting ducks.”

Representative Alexandria Ocasio-Cortez spoke outside her campaign office in the Bronx on Election Day.Credit…Desiree Rios for The New York Times

For months, Representative Alexandria Ocasio-Cortez has been a good soldier for the Democratic Party and Joseph R. Biden Jr. as he sought to defeat President Trump.

But on Saturday, in a nearly hourlong interview shortly after President-elect Biden was declared the winner, Ms. Ocasio-Cortez made clear the divisions within the party that animated the primary still exist. And she dismissed recent criticisms from some Democratic House members who have blamed the party’s left for costing them important seats. Some of the members who lost, she said, had made themselves “sitting ducks.”

These are edited excerpts from the conversation.

We finally have a fuller understanding of the results. What’s your macro takeaway?

Well, I think the central one is that we aren’t in a free fall to hell anymore. But whether we’re going to pick ourselves up or not is the lingering question. We paused this precipitous descent. And the question is if and how we will build ourselves back up.

We know that race is a problem, and avoiding it is not going to solve any electoral issues. We have to actively disarm the potent influence of racism at the polls.

But we also learned that progressive policies do not hurt candidates. Every single candidate that co-sponsored Medicare for All in a swing district kept their seat. We also know that co-sponsoring the Green New Deal was not a sinker. Mike Levin was an original co-sponsor of the legislation, and he kept his seat.

To your first point, Democrats lost seats in an election where they were expected to gain them. Is that what you are ascribing to racism and white supremacy at the polls?

I think it’s going to be really important how the party deals with this internally, and whether the party is going to be honest about doing a real post-mortem and actually digging into why they lost. Because before we even had any data yet in a lot of these races, there was already finger-pointing that this was progressives’ fault and that this was the fault of the Movement for Black Lives.

Some of this is criminal. It’s malpractice. Conor Lamb spent $2,000 on Facebook the week before the election. I don’t think anybody who is not on the internet in a real way in the Year of our Lord 2020 and loses an election can blame anyone else when you’re not even really on the internet.

Well, Conor Lamb did win. So what are you saying: Investment in digital advertising and canvassing are a greater reason moderate Democrats lost than any progressive policy?

These folks are pointing toward Republican messaging that they feel killed them, right? But why were you so vulnerable to that attack?

If you’re not door-knocking, if you’re not on the internet, if your main points of reliance are TV and mail, then you’re not running a campaign on all cylinders. I just don’t see how anyone could be making ideological claims when they didn’t run a full-fledged campaign.

There’s a reason Barack Obama built an entire national campaign apparatus outside of the Democratic National Committee. And there’s a reason that when he didn’t activate or continue that, we lost House majorities. Because the party — in and of itself — does not have the core competencies, and no amount of money is going to fix that.

If I lost my election, and I went out and I said: “This is moderates’ fault. This is because you didn’t let us have a floor vote on Medicare for all.” And they opened the hood on my campaign, and they found that I only spent $5,000 on TV ads the week before the election? They would laugh. And that’s what they look like right now trying to blame the Movement for Black Lives for their loss.

Is there anything from Tuesday that surprised you? Or made you rethink your previously held views?

The share of white support for Trump. I thought the polling was off, but just seeing it, there was that feeling of realizing what work we have to do.

We need to do a lot of anti-racist, deep canvassing in this country. Because if we keep losing white shares and just allowing Facebook to radicalize more and more elements of white voters and the white electorate, there’s no amount of people of color and young people that you can turn out to offset that.

But the problem is that right now, I think a lot of Dem strategy is to avoid actually working through this. Just trying to avoid poking the bear. That’s their argument with defunding police, right? To not agitate racial resentment. I don’t think that is sustainable.

There’s a lot of magical thinking in Washington, that this is just about special people that kind of come down from on high. Year after year, we decline the idea that they did work and ran sophisticated operations in favor of the idea that they are magical, special people. I need people to take these goggles off and realize how we can do things better.

If you are the D.C.C.C., and you’re hemorrhaging incumbent candidates to progressive insurgents, you would think that you may want to use some of those firms. But instead, we banned them. So the D.C.C.C. banned every single firm that is the best in the country at digital organizing.

The leadership and elements of the party — frankly, people in some of the most important decision-making positions in the party — are becoming so blinded to this anti-activist sentiment that they are blinding themselves to the very assets that they offer.

I’ve been begging the party to let me help them for two years. That’s also the damn thing of it. I’ve been trying to help. Before the election, I offered to help every single swing district Democrat with their operation. And every single one of them, but five, refused my help. And all five of the vulnerable or swing district people that I helped secured victory or are on a path to secure victory. And every single one that rejected my help is losing. And now they’re blaming us for their loss.

What is your expectation as to how open the Biden administration will be to the left? And what is the strategy in terms of moving it?

I don’t know how open they’ll be. And it’s not a personal thing. It’s just, the history of the party tends to be that we get really excited about the grass roots to get elected. And then those communities are promptly abandoned right after an election.

I think the transition period is going to indicate whether the administration is taking a more open and collaborative approach, or whether they’re taking a kind of icing-out approach. Because Obama’s transition set a trajectory for 2010 and some of our House losses. It was a lot of those transition decisions — and who was put in positions of leadership — that really informed, unsurprisingly, the strategy of governance.

What if the administration is hostile? If they take the John Kasich view of who Joe Biden should be? What do you do?

Well, I’d be bummed, because we’re going to lose. And that’s just what it is. These transition appointments, they send a signal. They tell a story of who the administration credits with this victory. And so it’s going be really hard after immigrant youth activists helped potentially deliver Arizona and Nevada. It’s going to be really hard after Detroit and Rashida Tlaib ran up the numbers in her district.

If the party believes after 94 percent of Detroit went to Biden, after Black organizers just doubled and tripled turnout down in Georgia, after so many people organized Philadelphia, the signal from the Democratic Party is the John Kasichs won us this election? I mean, I can’t even describe how dangerous that is.

You are diagnosing national trends. You’re maybe the most famous voice on the left currently. What can we expect from you in the next four years?

I don’t know. I think I’ll have probably more answers as we get through transition, and to the next term. How the party responds will very much inform my approach and what I think is going to be necessary.

The last two years have been pretty hostile. Externally, we’ve been winning. Externally, there’s been a ton of support, but internally, it’s been extremely hostile to anything that even smells progressive.

Is the party ready to, like, sit down and work together and figure out how we’re going to use the assets from everyone at the party? Or are they going to just kind of double down on this smothering approach? And that’s going to inform what I do.

Is there a universe in which they’re hostile enough that we’re talking about a Senate run in a couple years?

It’s the incoming. It’s the stress. It’s the violence. It’s the lack of support from your own party. It’s your own party thinking you’re the enemy. When your own colleagues talk anonymously in the press and then turn around and say you’re bad because you actually append your name to your opinion.

But I’m serious when I tell people the odds of me running for higher office and the odds of me just going off trying to start a homestead somewhere — they’re probably the same.

Extinction Watch: Rarely at home in the prairies

The suspect’s church blames his ‘sinful heart and depraved mind.’

Gov. Gavin Newsom asks: ‘What the hell is wrong with us?’