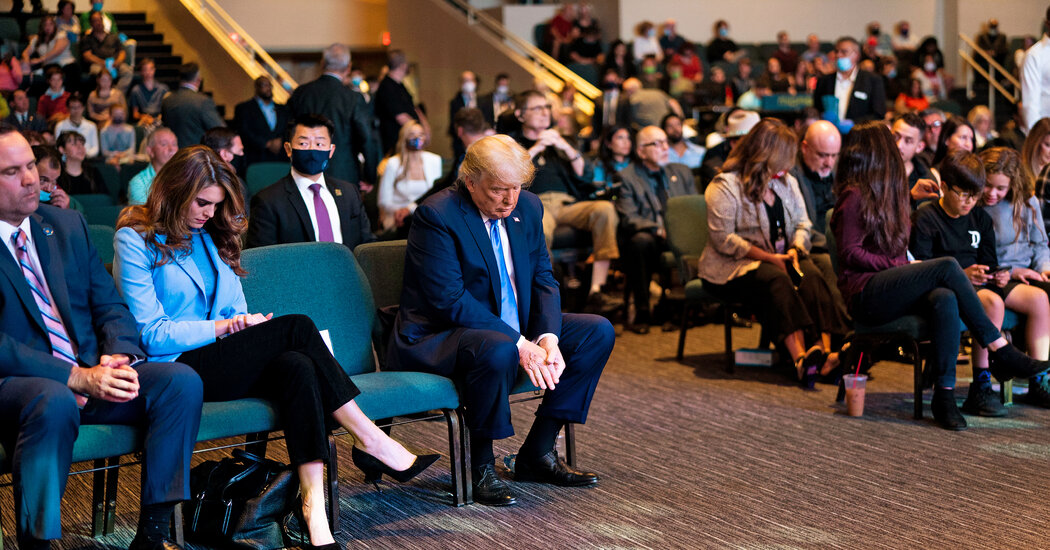 Many reflected on how much they had gained in the last four years under the Trump administration.

President Trump as he attends the Church Service at the International Church of Las Vegas in Las Vegas, Nev., in October.Credit…Doug Mills/The New York Times

When President Trump won the White House four years ago in a surprise victory, conservative Christians could not believe their good fortune.

At every turn of his presidency, he gave them everything they wanted: Two hundred federal judges appointed for life. An embassy in Jerusalem. Anti-abortion policies. Two Supreme Court Justices, and then in the final hours, a third. He was their bulwark, their defender, at a time when the country as they knew it, and their place in it, was changing. And he brought their movement to a pinnacle of political maturity.

Now the election of Joseph R. Biden Jr. marks a new chapter for conservative Christian power, which reached a peak under Mr. Trump. As Republican evangelicals around the country processed the week’s events, they reflected on how much they had gained in the last four years and on their fears over what could happen under a Biden administration. They also wondered when and how they would regain power.

In Sheldon, Iowa, where about eight out of ten voters supported Mr. Trump, Leah Schoonhoven journaled her concerns about a Biden presidency over three single-spaced pages. She worried that the election results were corrupted, and that Mr. Biden would reverse Mr. Trump’s priorities, from building the border wall to elevating conservative evangelical ideals on religious freedom.

“He doesn’t stand for Christianity at all; maybe he will prove me wrong,” she said of Mr. Biden, who is Catholic. “It scares me. He’s not going to do everything that Trump did.”

“I don’t think our world will ever get back, when you have a country that is this divided,” she said.

Donna Rigney, a pastor whose church meets in the lodge of an R.V. park in Salt Springs, Fla., had supported the president since 2016, when she received what she saw as a direct message from God supporting his candidacy.

After this election, she sent an email to the people in her prayer circles urging them not to give up. “We have to drag Donald Trump over the finish line with prayers of faith, worship, fasting and staying in the place of loving and forgiving our enemies,” she wrote.

But she said Friday that if this did turn out to be the end of the Trump era, she was grateful for what he had done for the country, and comforted that he would suffer fewer attacks. “He will be fine, he has God’s hand on him,” she said. “He’ll be better off not being the president and not being attacked daily. But I really feel this will be terrible for the nation.”

Mr. Trump’s presidency repeatedly revealed the deep divide between white conservative Christians and other people of faith, or of no faith at all. Mr. Biden’s narrow margin of victory in several battleground states revealed that the cultural clash between these groups is far from over. About eight in ten white evangelical voters supported Mr. Trump in the 2020 election, according to AP VoteCast, just as they did in 2016. Mr. Biden’s coalition included many Black Protestants, Hispanic Catholics, and religiously unaffiliated Americans.

Image President Trump and Judge Amy Coney Barrett at The White House after he announced Ms. Barrett as his pick to be the next Supreme Court Associate Justice, in September.Credit…Al Drago for The New York Times

Mr. Trump did win a larger share of support from Latino voters overall, though, compared with four years ago. And for Rev. Samuel Rodriguez, a Sacramento pastor who prayed at Mr. Trump’s 2017 inauguration, the lesson from the 2020 election was that Latinos had become what he called “the quintessential swing vote.”

Mr. Rodriguez saw one legacy of the Trump era redefining American evangelicals’ former approach to the question of politicians’ character. Their loyalty to Mr. Trump, which had required overlooking language and behavior they found abhorrent, proved that personal character isn’t everything to them, given how many tangible goals were achieved.

“The policies are absolutely remarkable,” he said.

Voting for a person like Donald Trump would have been unimaginable to evangelicals 40 years ago, when they emerged as a powerful faction behind the victory of Ronald Reagan, said R. Albert Mohler, Jr., president of the Southern Baptist Theological Seminary in Louisville, Ky.

Today, “they feel the wind facing them,” he said, “with a clear sense that the culture is becoming reordered in a hostile and increasingly secular manner. Evangelicals are voting with the same values, but with a different set of priorities.”

Mr. Mohler did not vote for Mr. Trump in 2016. But this year, he spoke publicly about his plans to vote for the president despite his continuing reservations, calling the alternative to a Trump victory “increasingly unthinkable.”

Like the president, a number of evangelical leaders refused to accept an outcome in which Mr. Trump had lost. Moments after most major news networks calculated that Mr. Biden had won the race, Franklin Graham, the evangelist, cautioned that the results were not “official.”

And Mr. Graham warned that under a Biden administration, Christian businesses would be soon be targeted for things like not selling a cake for a gay wedding, as he said happened during Mr. Obama’s presidency.

“America is in such moral decline,” he said. “We are becoming a much more violent country. I am afraid for our country.”

In Texas, Robert Jeffress, pastor of First Baptist Dallas, reserved billboards across the city to advertise his upcoming sermon on how Christians should respond to a Biden presidency.

“There are going to be millions of Christians who are disappointed in these results,” he said.

Senior Pastor Dr. Robert Jeffress addresses attendees before Vice President Mike Pence made comments at First Baptist Church Dallas in June. The pastor reserved billboards across the city to advertise his upcoming sermon on how Christians should respond to a Biden presidency.Credit…Tony Gutierrez/Associated Press

“A Joe Biden win cannot erase all the positive accomplishments that can be attributed to President Trump,” he said. “I don’t think there is any way to calculate all the good things he has accomplished.”

Some social conservative political groups were already pivoting to other political fights, such as protecting Republican control of the Senate, which could be decided by two runoff elections in Georgia in January. Continued Republican control of the Senate could buffer their accomplishments under Mr. Trump, and make it harder for Democrats to do things like fund Planned Parenthood or increase the size of the Supreme Court, several organizers said.

“To plan for the Biden administration, we’ve got to have a backstop; otherwise it is the Armageddon we feared in the beginning,” said Marjorie Dannenfelser, president of the Susan B. Anthony List. “That’s why Georgia is so vital. The other side knows that, too.”

On Saturday, as the Biden campaign declared victory, the Faith and Freedom Coalition began knocking on doors across the state, and prepared to distribute one million voter guides to 4,000 churches.

Social conservatives also celebrated the election to the House of at least 15 new women who oppose abortion rights, more than doubling their numbers in the previous Congress. About half of the 15 flipped seats that had been in Democratic hands.

And social conservatives had another reason to stay positive: Even though Mr. Trump had lost, they believed that the conservative control of the judiciary that he enabled would have a lasting impact.

“When Amy Coney Barrett writes the majority decision protecting Christian foster care and adoption agencies, I’m going to celebrate,” Penny Nance, president of Concerned Women for America, said. “We put some points on the board.”

Extinction Watch: How African Black Rhino came back from extinction

Scientists Don’t Want to Ignore the ‘Lab Leak’ Theory, Despite No New Evidence

Helen Etuk, Who Planned to Be a Pediatrician, Dies at 20