Biden Could Roll Back Trump Agenda With Blitz of Executive Actions 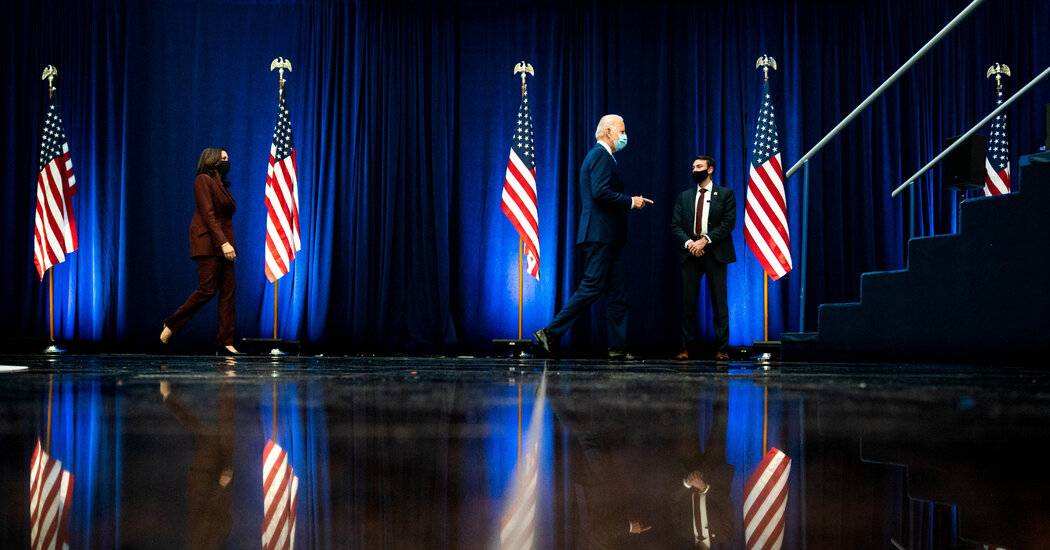 For Joseph R. Biden Jr., who won the election in a deeply divided nation, the early signals he sends as the country’s new leader will be critical.

On the trail, Joseph R. Biden Jr. repeatedly said he was campaigning as a Democrat but would govern “as an American.”Credit…Erin Schaff/The New York Times

WASHINGTON — President-elect Joseph R. Biden Jr. is poised to unleash a series of executive actions on his first day in the Oval Office, prompting what is likely to be a yearslong effort to unwind President Trump’s domestic agenda and immediately signal a wholesale shift in the United States’ place in the world.

In the first hours after he takes the oath of office on the West Front of the Capitol at noon on Jan. 20, Mr. Biden has said, he will send a letter to the United Nations indicating that the country will rejoin the global effort to combat climate change, reversing Mr. Trump’s decision to withdraw from the Paris climate accord with more than 174 countries.

Mr. Biden’s afternoon will be a busy one.

He has vowed that on Day 1 he will move rapidly to confront the coronavirus pandemic by appointing a “national supply chain commander” and establishing a “pandemic testing board,” similar to Franklin D. Roosevelt’s wartime production panel. He has said he will restore the rights of government workers to unionize. He has promised to order a new fight against homelessness and resettle more refugees fleeing war. He has pledged to abandon Mr. Trump’s travel ban on mostly Muslim countries and to begin calling foreign leaders in an attempt to restore trust among the United States’ closest allies.

“Every president wants to come out of the gate strong and start fulfilling campaign promises before lunch on the first day,” said Dan Pfeiffer, who served as a senior adviser to President Barack Obama and helped choreograph Mr. Obama’s first days in the White House. “Executive orders are the best way to do that.”

For Mr. Biden, who won the election in a deeply divided nation, the early signals he sends as the country’s new leader will be critical. On the trail, he repeatedly said he was campaigning as a Democrat but would govern “as an American.” Following through on that promise will require him to demonstrate some respect for parts of the Trump agenda that were fiercely supported by the more than 70 million people who did not cast ballots for him.

“How far is he going to go?” Rick Santorum, a former Republican senator, asked on CNN on Saturday, hours after Mr. Biden had been declared the victor. “If you want to show that you want to work on a bipartisan basis, then you don’t go out right away and sign all the executive orders on immigration and bypass the Congress.”

But there is no question that Mr. Biden and members of his party are eager to systematically erase what they view as destructive policies that the president pursued on the environment, immigration, health care, gay rights, trade, tax cuts, civil rights, abortion, race relations, military spending and more.

Some of that will require cooperation with Congress, which may remain divided next year. If Republicans maintain control of the Senate, Mr. Biden’s pledges to roll back some of Mr. Trump’s tax cuts are almost certain to run headfirst into fierce opposition from that chamber. Efforts to advance a more liberal agenda on civil rights and race relations — centerpieces of Mr. Biden’s stump speech during his campaign — may falter. And his efforts to shape the new government with appointments could be constrained by the need to win approval in a Republican Senate.

Image President Trump issued executive orders on immigration early on in his administration that Mr. Biden would like to reverse.Credit…John Moore/Getty Images

But Mr. Biden may be able to achieve some of his goals with nothing more than the stroke of a pen. Mr. Trump largely failed to successfully negotiate with House Democrats during his four years in office, leaving him no choice but to use executive actions to advance his agenda. Mr. Biden can use the same tools to reverse them.

Prior presidents have tried to do just that, though not always successfully.

On his first full day in the White House in 2009, Mr. Obama issued an executive order on presidential records and a second one on ethics that, among other provisions, tried to ban members of his administration from lobbying the federal government for two years after they leave. Ethics watchdogs later complained that some officials had found ways around the restrictions.

The next day, Mr. Obama ordered an end to torture by the government, responding to an outcry over the use of harsh interrogation measures by his predecessor. He also ordered the closure of the terrorist detention facility at Guantánamo Bay, Cuba — which members of Congress were continuing to block by the time he left office eight years later.

Mr. Trump, too, moved quickly. In the first hours after he was sworn in, Mr. Trump issued an executive order pledging to repeal the Affordable Care Act and directing the government to “take all actions consistent with law to minimize the unwarranted economic and regulatory burdens of the act.”

In the week that followed, Mr. Trump issued executive orders on immigration, requesting changes to asylum proceedings at the border, increasing deportations of undocumented immigrants and banning travel from several mostly Muslim countries — an order that incited chaos at several airports as border officials struggled to understand whom it applied to.

Some executive orders have become almost automatic at the start of a new administration. Mr. Biden is almost certain to move immediately to revoke the so-called global gag rule, which prohibits federal government funding for foreign organizations that provide or even talk about abortion. The rule, also known as the Mexico City policy, has been a political Ping-Pong ball since Ronald Reagan was president and is typically in place only under Republican administrations. Mr. Trump reinstated it on his first business day in office.

But Mr. Biden has signaled that his top priority will be demonstrating a much more muscular federal approach to the pandemic than Mr. Trump’s leave-it-to-the states strategy.

Mr. Biden has vowed to move rapidly to confront the coronavirus pandemic by appointing a “national supply chain commander” and establishing a “pandemic testing board.”Credit…Dan Koeck for The New York Times

Aides said he would use the power of his office to invoke the Defense Production Act — the Korean War-era law that allows the president to order businesses to manufacture products necessary for national defense — to build up supplies more aggressively than Mr. Trump has.

While Mr. Biden would like to see a national mask mandate, his advisers have concluded that he does not have the legal authority to impose one. So he will try to increase mask wearing in other ways. He has already said that, as president, he would require masks on all federal property, an executive order that could have wide reach and is likely to come in the first hours or days of his presidency.

In addition to mandating masks in federal buildings, Mr. Biden has said he would require them on “all interstate transportation.”

The president-elect has also repeatedly derided Mr. Trump’s lack of ethical standards, accusing him of waging an extensive assault on Washington’s norms and traditions. Mr. Biden’s response to that will probably take the form of an ethics pledge to impose tough new requirements on the people who serve in his government.

“The Trump administration has shredded those standards,” Mr. Biden’s campaign wrote on his website. “On Day 1, Biden will issue an ethics pledge, building and improving on the Obama-Biden administration’s pledge, to ensure that every member of his administration focuses day in and day out on the best outcomes for the American people, and nothing else.”

In addition to rejoining the climate accord, Mr. Biden has also made it clear that he will immediately begin using the levers of executive authority to re-establish Mr. Obama’s regime of environmental regulations that Mr. Trump systematically dismantled during his tenure.

That is likely to include a rapid rescission of an executive order Mr. Trump issued early in his administration that itself called for revoking all regulations addressing climate change and instead promoting fossil fuel development — and replacing it with one that declares a Biden administration’s intention to cut planet-warming greenhouse gases.

Mr. Trump said in 2017 that he would sharply reduce Bears Ears National Monument, a sprawling region of red rock canyons.Credit…Alex Goodlett for The New York Times

Efforts to assist poor communities — often situated in proximity to toxic polluting sites and bearing the brunt of climate change consequences — could also be undertaken from the White House. That might include executive orders establishing an environmental justice advisory council that can coordinate policy across agencies; creating screening tools to better understand environmental disparities across the country; and increasing pollution monitoring in frontline communities.

Passing bigger parts of Mr. Biden’s environmental agenda, like eliminating fossil fuel emissions from the power sector by 2035, would almost certainly require Congress to pass a clean-energy-specific law, most likely in the form of a mandate that an increasing percentage of electricity generated in the United States will be produced by zero-emissions sources, such as wind, solar, geothermal, hydroelectric power and possibly nuclear power.

Thomas J. Pyle, the president of the Institute for Energy Research, an organization that supports the use of fossil fuels, said that “if history is a guide,” Republicans would be unlikely to support any type of mandate.

“Certainly he does not have a mandate for his climate plan,” Mr. Pyle said. “He will be constrained to executive orders and carefully crafted regulations.”

Cases of Unruly Airline Passengers Are Soaring, and So Are Federal Fines