How Georgia Turned From Reliably Republican to Political Ground Zero 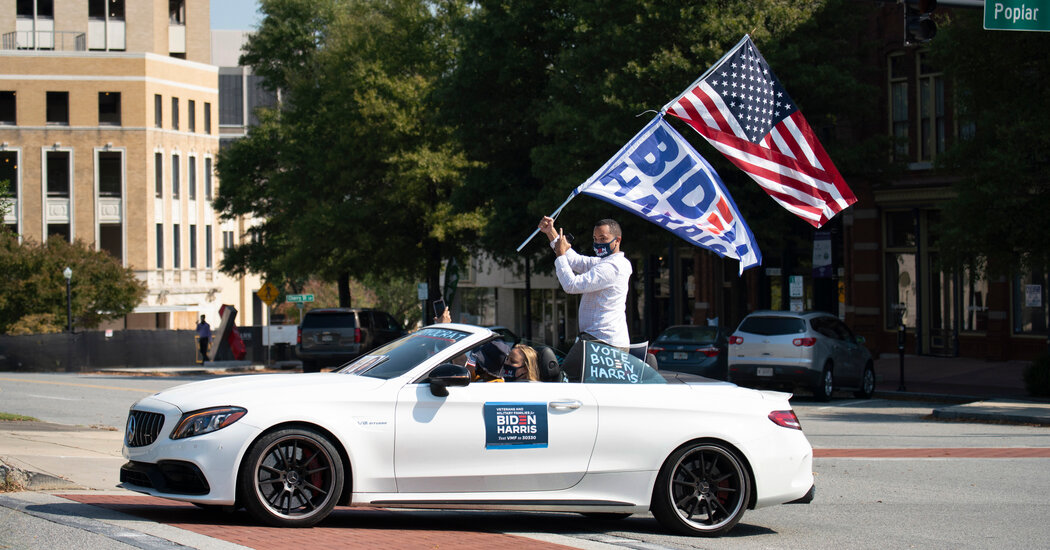 Joe Biden’s narrow lead in Georgia and the runoffs that will determine control of the Senate have raised questions as to whether 2020 is a Trumpian aberration or a long-anticipated political shift.

Supporters of Joseph R. Biden Jr. at a rally in Macon, Ga., in October.Credit…Nicole Craine for The New York Times

MARIETTA, Ga. — It took a lifetime for Angie Jones to become a Democrat.

As a young woman, she was the proud daughter of a conservative family active in Republican politics. Ten years ago, after a friend’s son came out as gay, Ms. Jones became an independent, though one who watched Fox News. After the 2016 election, Ms. Jones, a stay-at-home mother in Johns Creek, a pristine wealthy suburb north of Atlanta, became frustrated with her conservative friends defending President Trump through scandal after scandal.

And this year, she voted for Joseph R. Biden Jr., after spending months phone banking, canvassing and organizing for Democratic candidates with a group of suburban women across Atlanta.

“I feel like the Republican Party left me,” said Ms. Jones, 54. “It very much created an existential crisis for me.”

This week, the political evolution of voters like Ms. Jones drove Georgia to a breakthrough for Democrats: Mr. Biden, the president-elect, is on the verge of adding the state to his winning electoral margin, with a narrow lead that is nevertheless a dramatic sign of the shifting politics of the South.

And two Democratic candidates, the Rev. Dr. Raphael G. Warnock and Jon Ossoff, forced runoff elections on Jan. 5 that should decide control of the Senate, and the fate of much of Mr. Biden’s agenda. With the November election barely over, the nation’s political focus will now turn to Georgia as much as the presidential transition in Washington, as both parties pour money and resources into what may be an epic political battle, in a state that was considered safely Republican just a decade ago.

“It’s going to be hand to hand, street by street, and either one of them can win,” said former Gov. Roy Barnes, the most recent Democratic governor in the state.

The runoff contests will take place in a Georgia that bears little political resemblance to the state that voted out Mr. Barnes in 2002 after he engaged in a contentious effort to remove the Confederate battle emblem from the state flag.

The population surged to 10.6 million in 2019 from 7.9 million in 2000, and the foreign-born population now exceeds 10 percent of the state’s total. Atlanta has gone from corporate bland to youthful dynamic, with its indoor food markets, destination dining scene and rich entertainment culture, including a hip-hop scene that drives trends worldwide. In 2004, 70 percent of voters were white, according to exit polls. This year, white voters made up 60 percent.

Until the 1970s, Georgia was virtually a one-party state, with conservative Democrats dominant. But as conservative voters moved en masse to the Republican Party, Democrats were left concentrated in places like the city of Atlanta, adjacent and urbane Decatur, and smaller cities with significant African-American populations.

In the last few years, however, distaste for Trumpism has spread and demographic change has exploded, giving Democrats new strength in the vote-rich northern suburbs of Atlanta — like Cobb and Gwinnett Counties, which were once bastions of Republican power.

Hillary Clinton carried Cobb and Gwinnett even as she lost the state in 2016. This year, Mr. Biden won them again. And he added to her margin in the state, especially in the counties that are home to Georgia’s most important second-tier cities — Augusta, Columbus, Macon, Savannah and Athens.

In recent months, the pandemic has slowed the Georgia economy, with unemployment rising to 6.4 percent in September from 5.7 percent in August. Covid-19 cases are increasing too; over the past week, each day has averaged 2,242 new cases, an increase of 42 percent from the average two weeks earlier.

A new generation of Democratic candidates has left behind the fiscal and social conservatism of its forefathers to embrace a rising demographic coalition of Black voters, college-educated suburban women and a more politically engaged younger generation.

Even if Mr. Biden’s victory was ultimately delivered by Northern industrial states like Pennsylvania, his slim margin in Georgia points to the future of the Democratic Party, which could come into clearer view in the Senate runoffs.

Republicans will try to stop Democratic momentum, hoping that Mr. Biden’s strong performance here was more about Mr. Trump’s divisiveness than the G.O.P.’s loosening grip on the dynamic South. For Democrats, winning both seats would leave the Senate at a 50-50 split, with the vice president, Kamala Harris, the tiebreaker.

Even one Senate seat could prove that the demographic changes that Democrats have long predicted would favor them in swaths of the Sun Belt have finally arrived.

Early voters waited to cast their ballots in October. The state population surged to 10.6 million in 2019 from 7.9 million in 2000, and the foreign-born population now exceeds 10 percent of the total.Credit…Nicole Craine for The New York Times

And the lessons learned through the organizing of Black and young voters and the energizing of the suburbs are being watched by Democrats in other Sun Belt battlegrounds like Texas, and in Deep South states like South Carolina and Mississippi, where truly competing with Republicans remains a distant dream.

Xiang Li, 36, who works for an insurance company and lives in the county, voted for Mr. Trump in 2016 but said he couldn’t this year.

“I’m voting Democrat in the runoff because of what McConnell has done to the Senate,” Mr. Li, a registered independent, said in reference to the Senate majority leader, Mitch McConnell. “Next election after that, I’ll see what’s going on. I’m hoping the Republican Party comes back to normalcy.”

Despite the changes, the Republican Party here remains well organized, powerful and popular, especially in rural and exurban communities. Democrats had hoped to gain control of the State House to pressure the Republican governor, Brian Kemp, to expand Medicaid under the Affordable Care Act, enact changes to the voting system and give them some voice in the redrawing of congressional and state legislative maps after the 2020 census.

But they are likely to pick up only a couple of seats. The Republicans even picked off the House’s minority leader, Bob Trammell, an embarrassing Democratic loss. And redistricting could cost Democrats some of the gains they have made.

With a President-elect Biden, “Democrats will be fat and happy, and Republicans will be scared and mobilized, and maybe even angry,” said Brian Robinson, a Republican political strategist in Georgia. “And they’re going to want to build a red wall in the Senate.”

The intense political spotlight on Georgia is not entirely unexpected. In 2012, President Barack Obama’s strategists weighed whether to compete in Georgia before deciding that other states provided an easier path to victory. Four years later, Mrs. Clinton won more raw votes than any Democratic nominee in history, a sign that some suburban revulsion for Mr. Trump had already begun.

Opposition to Mr. Trump accelerated the political changes in 2018, helping Democratic candidates flip a House seat and nearly win another in Atlanta’s suburbs. That seat flipped Democratic this month, so far the only straight Democratic pickup in the country. (Democrats also won two districts in North Carolina that had been redrawn to favor them.)

Meantime, Democrat Stacey Abrams lost the closest race for governor in a quarter century. Rather than try to woo more conservative white voters, Ms. Abrams focused on turning out intermittent and Black voters while embracing an unapologetically liberal platform.

A group she founded, the New Georgia Project, has registered hundreds of thousands of new voters and inspired other emerging activists.

Julius Thomas, 24, a risk analyst broker who grew up in the small coastal city of St. Marys, Ga., moved to Atlanta in 2018, the year Ms. Abrams lost the governor’s race but gained national stature.

“There’s a culture shift that’s happening among young Black people where it’s no longer cool to sit out civically,” he said. “On your Twitter feed, you’re seeing people say, ‘If you haven’t voted, what’s wrong with you?’”

“In high school, voting was something my parents did,” said Ms. Jules, who is studying for a degree in business administration. “I have a teenager in high school who is a junior, and her and her friends talk about policies, politics. They go to rallies.”

Some of the changes in Georgia mirror the nation, with urban areas growing more Democratic, rural regions moving Republican and the suburbs left as the country’s political battlegrounds.

In Georgia’s suburbs, college-educated women have become a powerful force, forming volunteer networks and organizing for local and national candidates.

Taking a break from putting up Christmas decorations, Debbie O’Dekirk and Kassie Jones, two friends in the affluent northwest Atlanta suburbs, where neighborhoods are dotted with farmer’s markets and lush town squares, described how they had turned against Mr. Trump.

Ms. O’Dekirk, 67, initially liked that the president wasn’t a typical politician, voting for him in 2016. But she expected him to take guidance from more experienced Republican leaders once he entered office.

“The exact opposite happened,” said Ms. O’Dekirk, a retired retail executive from Cobb County. “It was the biggest disappointment I’ve ever had in my life, as far as any president.”

The electorate of Georgia is changing. In 2004, 70 percent of voters were white, according to exit polls. This year, white voters made up 60 percent.Credit…Audra Melton for The New York Times

Ms. Jones, 68, supported Mrs. Clinton four years ago and was devastated when she lost. Since then, she has become increasingly vocal about her support for Democrats — a trend she sees in her suburban neighborhood where signs for both Mr. Biden and Mr. Trump dotted the lawns.

“When I first came to Georgia, it was just this private little society of Democrats,” said Ms. Jones, a former banker who moved to the state shortly before Mr. Trump was elected. “But the more concerned they got with the president, the more people started to speak up.”

Ms. Jones, who volunteered for Mr. Biden’s campaign, has already starting talking to her neighbors about the runoffs.

“I’m so proud to be part of Georgia now,” she said. “But we’ve got to get everyone to understand their job’s not done yet.”

As Far as Luc Tuymans Is Concerned, Nothing Is Original

Extinction Watch: Which species may vanish & why