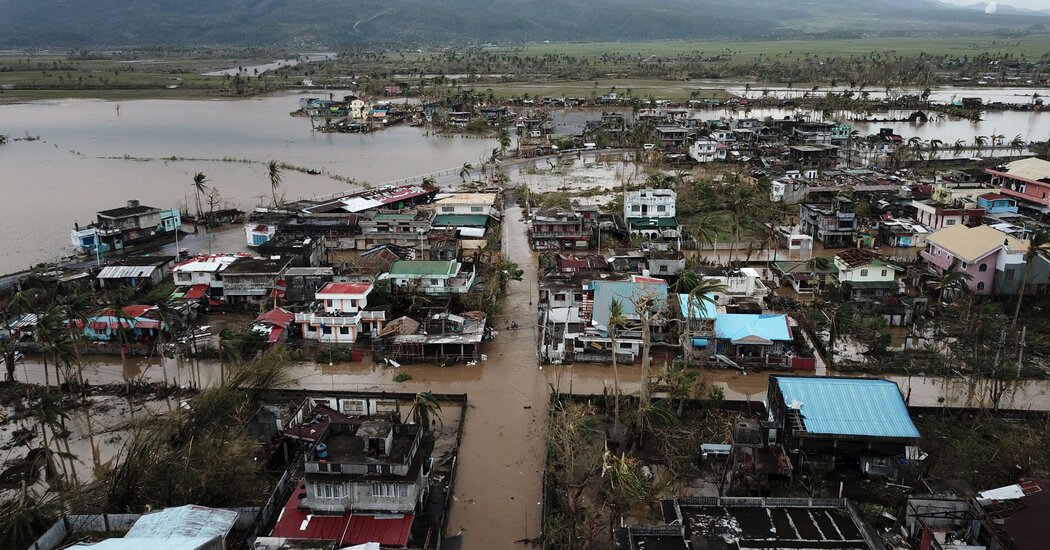 Assessing Goni, the 18th typhoon to hit the Philippines this year.

We’re covering new lockdown measures in Europe, the destruction from Typhoon Goni in the Philippines and the distrust of polls in the U.S.

Image Empty tables at a restaurant in London on Sunday, with Tower Bridge in the background.Credit…Justin Tallis/Agence France-Presse — Getty Images

After weeks of resisting calls for a lockdown, Prime Minister Boris Johnson is shutting pubs, restaurants and most retail stores in England, starting on Thursday until Dec. 2. Scotland, Wales and Northern Ireland had already put in place such restrictions.

Greece and Austria also tightened measures, joining France, Germany, Belgium and Ireland in shutting down large parts of their economies to try to keep their hospitals from being overwhelmed. Italy, which is preparing for lockdowns in the most infected regions, has become emblematic of a despair, exhaustion and fear that is spreading throughout the Continent.

The numbers: Britain has crossed the one million mark for total cases, according to a New York Times database, and its death toll from the virus is 58,925, one of the highest in Europe.

Flooded streets and destroyed homes in the town of Malinao, south of Manila, on Sunday after Typhoon Goni.Credit…Charism Sayat/Agence France-Presse — Getty Images

With sustained winds of 135 miles per hour on Sunday morning, Goni ranks among the most powerful tropical storms to make landfall. By the end of the day, the typhoon had weakened and, aside from power outages, appeared to have spared the area in and around the capital, Manila.

But at least 10 people died in Albay Province in the Bicol region, which is to the east of Manila and was more squarely in the typhoon’s path. In Bicol, nearly 400,000 people have been displaced, with almost 350,000 of them sheltering in evacuation centers.

As of 8 p.m. local time, the typhoon was over the South China Sea, to the west of Luzon, according to the national weather agency.

Pro-democracy lawmaker Raymond Chan, one of the seven lawmakers arrested on Sunday, carried out by security guards at the council meeting in May.Credit…Anthony Wallace/Agence France-Presse — Getty Images

The police arrested six men and one woman early Sunday who were involved in heated disputes in May over the control of a key committee in Hong Kong’s Legislative Council that descended into scuffles between pro-democracy and pro-China lawmakers.

The seven lawmakers are accused of acts of contempt and interference. The police did not rule out the possibility of arresting more people over the incident.

Context: The governments in Hong Kong and Beijing have carried out a clampdown on dissent after the semiautonomous city was convulsed with protests in 2019. Beijing imposed a national security law there in June that allows for potentially tough penalties for a series of poorly defined offenses like subversion and collusion, and the authorities have also made aggressive use of social-distancing rules against protesters.

If you have 6 minutes, this is worth it

As the coronavirus sent economies reeling, the wealthiest nations were cushioned by extraordinary credit unleashed by central banks and government spending. Developing countries have yet to receive help on such a scale. Above, women lining up to receive cash aid in Hyderabad, Pakistan, last month.

Our European economics correspondent looked at how the International Monetary Fund and the World Bank have failed to help the developing world weather the pandemic, offering a weak response due in part to the influence of their largest shareholder: the U.S.

Final U.S. campaign push: As the U.S. election winds to a close ahead of Tuesday’s vote, President Trump and Joe Biden, the Democratic presidential nominee, are converging on Pennsylvania, both of them holding a flurry of events in a last-minute quest for votes.

Canadian Halloween stabbing: The police in Quebec City have arrested a man in his mid-20s who they say was dressed in medieval garb and carrying a sword when he went on a rampage on Halloween night, leaving at least two people dead and five wounded.

U.S. contractors jailed: A total of 28 private contractors supporting U.S. military operations in the Middle East have served prison sentences in Kuwait for drug offenses over the past five years, receiving little help from the State Department.

Snapshot: Above, rescuers search through the rubble of a collapsed building in Izmir, Turkey, on Sunday. The magnitude 7.0 earthquake that hit Friday has left at least 62 dead and more than 900 others injured.

What we’re reading: This Bon Appétit article on a food writer who started a cafe — for a chipmunk. Anna Holland, an editor in London, calls the piece “the infusion of joy so many of us need right now.”

Cook: Like most stews, this hearty beef stew with red onions and ale improves as it sits. Our Food writer, Melissa Clark, says it’s as cozy as her favorite sweater.

Watch: Sean Connery, who died on Saturday at 90, played a man’s man with an earthy sexiness, whether as James Bond or Indiana Jones’s father. These 15 movies illustrate how Connery commanded the screen.

Do: Consider these questions to help you decide whether you would feel comfortable taking a trip during the pandemic.

November is here and that may mean more time spent at home. For something fun and engaging to read, cook, watch and do, scroll through our At Home collection of ideas.

When Donald Trump won in 2016 after a majority of polls predicted otherwise, it was the biggest polling miss in a presidential election in decades. Consequently, there is uncertainty around this year’s polling averages showing former Vice President Joe Biden ahead of Mr. Trump.

In reality, the polls in 2016 by some measures were better than those in 2012: Many national polls fared well. The final Times/CBS News survey had Hillary Clinton ahead by three points nationwide, less than a percentage point from her final popular vote margin.

One of the major reasons state polls favored Mrs. Clinton was that they didn’t typically adjust their samples by education. This year, for the first time, Monmouth University — a high-profile pollster — is weighting education. But many state polls still don’t.

The Times’s polling expert, Nate Cohn, found our polls to be top-notch, not least because their starting point is a list of every registered voter in the region, greatly increasing the odds that the right number of Democrats and Republicans are interviewed. The Times/Siena polling received one of the few A-plus ratings by the analytical website FiveThirtyEight.

When The Times calculates polling averages, it takes into account the shortcomings of some polls and adjusts accordingly, such as weighting by quality and sample size.

Not every poll is perfect, but pollsters have made strides in learning from 2016, and given Mr. Biden’s lead, the state polls would have to be less accurate than they were in 2016 for that advantage to not bear out in voting, according to Nate. Keep up with the latest updates in the Presidential Polling Diary.

That’s it for this briefing. See you next time.

Thank you
To Theodore Kim and Jahaan Singh for the break from the news. Will Dudding wrote today’s Back Story. You can reach the team at briefing@nytimes.com.

P.S.
• We’re listening to “The Daily.” Our latest episode is on elderly voters who have switched sides in the U.S. election.
• Here’s our Mini Crossword, and a clue: Dull pain (Four letters). You can find all our puzzles here.
• The Daily will broadcast live on Tuesday for the first time, to cover the U.S. elections.