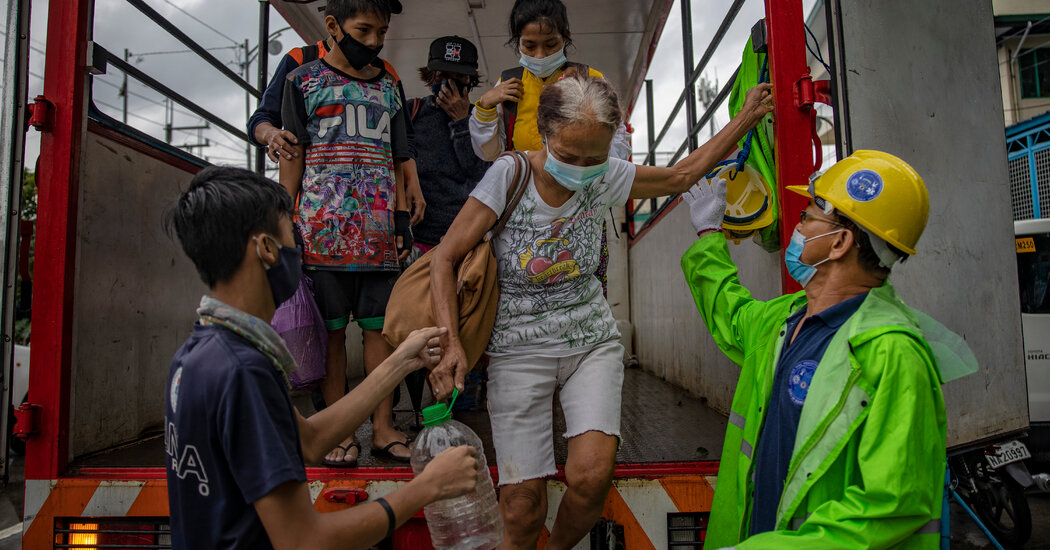 With sustained winds of up to 135 miles an hour at landfall, the storm barreled across Luzon, the country’s most populous island, but mostly missed the capital. At least 10 people were killed.

Goni has been downgraded from a typhoon to a tropical storm and has left the Philippines, after displacing hundreds of thousands of people.

Here’s what you need to know:

Image Arriving at an evacuation center in Manila on Sunday morning.Credit…Ezra Acayan/Getty Images

Manila escapes the worst of the typhoon’s wrath.

Typhoon Goni, which made landfall in the Philippines with intense winds early on Sunday morning, by the end of the day appeared to have spared the area in and around the capital Manila, with its 13 million residents.

While only grazing the capital, the storm left at least 10 people dead in the Bicol region of Luzon, the most populous island of the Philippines, according to the regional Office of Civil Defense there. Several died from an overflowing river, while one was killed by a falling tree branch, said Al Francis Bichara, the governor of Albay Province in Bicol, which is southeast of Manila and was more squarely in the typhoon’s path.

By late Sunday, Goni, which at one point was one of the most powerful storms ever recorded, had weakened to a tropical storm, according to the national weather agency.

It passed across the Luzon on a path that took it south of Manila and out to the South China Sea by early Monday in the Philippines. It was expected to reach Vietnam later this week with heavy rains, but not damaging winds.

In Manila, electricity was out in some areas, though no widespread destruction was reported. In Bicol, nearly 400,000 people were displaced by the typhoon, with almost 350,000 of them sheltering in evacuation centers, and power was out, the civil defense office there said. 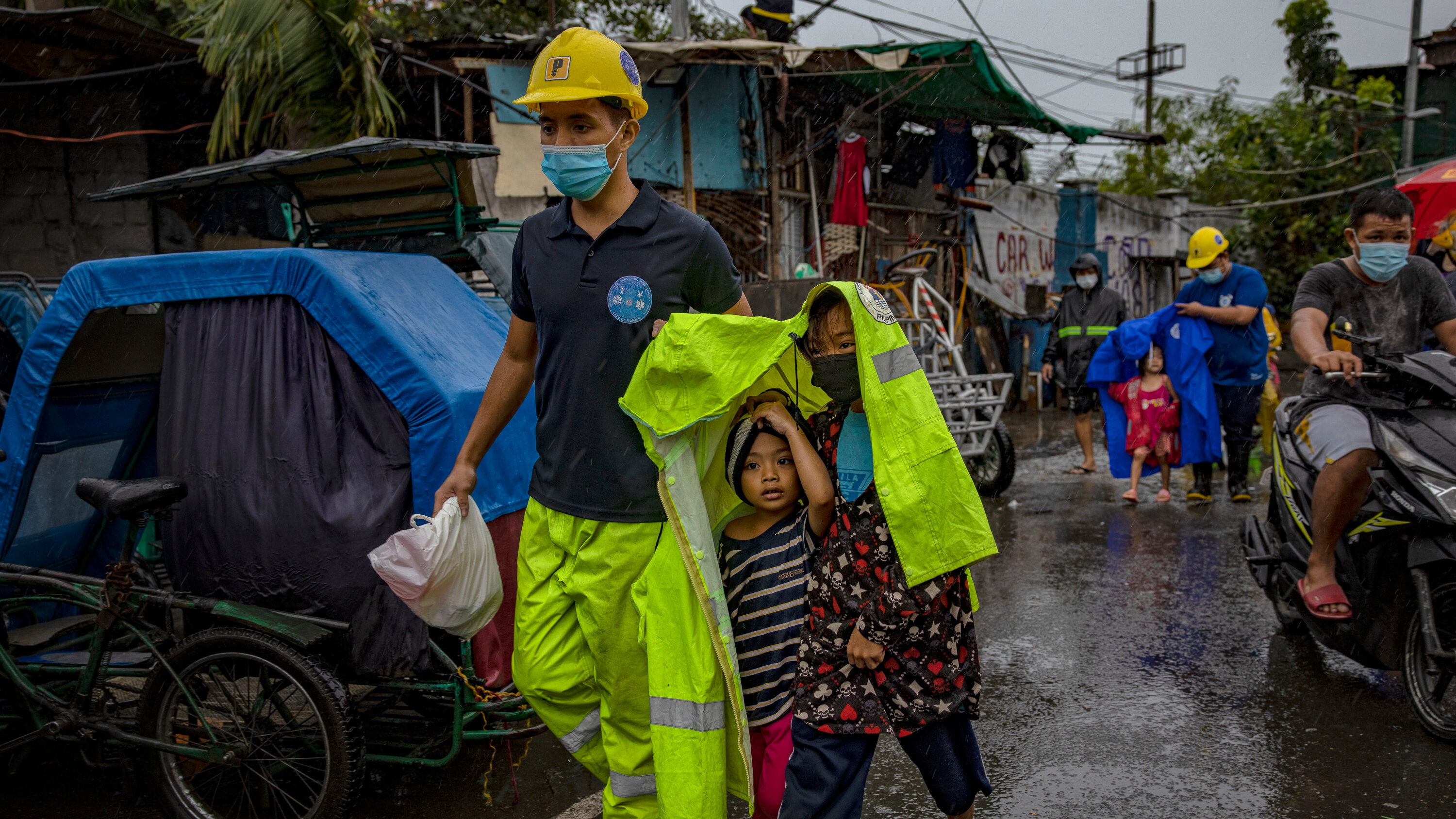 Typhoon Goni made landfall in the Philippines early Sunday with sustained winds up to 135 miles an hour, leaving at least 10 people dead in the Bicol region of Luzon. The storm largely spared Manila, the capital.CreditCredit…Ezra Acayan/Getty Images

Thousands of Manila residents had been relocated by the Coast Guard and local disaster officials, particularly those living in vulnerable areas near Manila Bay.

“We have been on high alert since Friday,” said Francisco Domagoso, the mayor of the capital.

Mr. Domagoso said that the city, which has been battling outbreaks of Covid-19, is trying “to strictly follow health protocols at the evacuation centers so we won’t have a spread of the coronavirus.”

“Right now, we are busy clearing debris on the roads, including fallen electricity wires and providing emergency food and provisions,” he said.

In Albay Province, one of the first heavily populated areas to be battered by Goni on Sunday, A.J. Miraflor, a resident, said the typhoon was “powerful and winds were howling.”

Flooding had inundated some streets, he said. On social media, Mr. Miraflor posted images from his mobile phone of people stranded on their rooftops as floodwaters swept through Cagsawa, a village in Albay near the town of Daraga.

Another typhoon, Durian, in 2006, devastated the Bicol region when massive mudflows poured from the slopes of the Mayon volcano. Nearly 2,000 people died from that storm.

In 1814, Cagsawa was buried when Mayon erupted, just one of a long list of natural disasters endured by this part of the Philippines.

Ten deaths are reported as Goni’s strength recalls a storm that ravaged the country in 2013.

Government workers clearing a toppled electric post in the town of Tigaon, the Philippines.Credit…Francis R Malasig/EPA, via Shutterstock

Goni approached the Philippines on Saturday as “super-typhoon” with sustained winds over 190 miles per hour, among the highest ever recorded. It weakened somewhat before making landfall on Sunday morning, first on the island of Catanduanes and then on Luzon’s Bicol peninsula, but it still packed winds of 135 miles per hour as it whipped across Bicol, making it one of the most powerful storms to strike the Philippines.

In 2013, the Philippines was hit by Typhoon Haiyan, another record-challenging storm, which killed more than 6,300 people on the island of Luzon. Haiyan destroyed or severely damaged more than four million homes, and the widespread looting that followed the storm devastated the university city of Tacloban.

The Philippine national weather agency, Pagasa, warned on Sunday that Goni’s effect on Luzon might be “catastrophic, and issued flood advisories for several river basins.

On Sunday evening, the Office of Civil Defense in the Bicol region, on the eastern flank of Luzon, said that Typhoon Goni had killed at least 10 people. It said that all the fatalities had been in Albay Province, about 200 miles southeast of Manila.

Last week, 22 people were killed as Typhoon Molave cut a path across the same region that Goni powered through.

The national weather agency has warned that another tropical storm, Atsani, is developing behind Goni, although it has not yet gathered as much strength. The Philippines is regularly struck by about 20 typhoons a year, and climate change has intensified the effects of the storms.

On the front lines of the typhoon’s arrival, ‘roofs were flying.’

The governor of Albay Province, just south of where Goni made landfall, described its arrival as “probably the strongest storm I have seen” in an interview with ANC, a Philippine cable TV station.

The governor, Al Francis Bichara, speaking from Legazpi, the capital of Albay, said that more than 150,000 residents had been evacuated to storm shelters ahead of landfall.

“In our district, roofs were flying,” he said, adding that visibility had been reduced to about 50 yards.

Images on social media showed some roads in the province turned into rivers of rainfall.

Goni had sustained winds of 135 miles per hour at its center and gusts of 165 miles per hour as of early Sunday, prompting the Joint Typhoon Warning Center to categorize the storm as a super typhoon.

The closing of a free news network shows the challenges in getting information to the public in an emergency.

Tents inside a school gymnasium converted into an evacuation center in Manila.Credit…Ezra Acayan/Getty Images

Officials from the National Disaster Risk Reduction and Management Council on Sunday sent out a warning to the millions of Filipinos living in or near the path of Typhoon Goni to seek shelter.

But the news conference was aired on a cable TV station only available to subscribers who paid for it, highlighting the difficulty of getting emergency updates to large swaths of people since the closing of ABS-CBN, a news network that offered free TV and radio broadcasts.

ABS-CBN fell afoul of President Rodrigo Duterte, who accused it of bias. The network ended its local coverage in August. Many Filipinos in remote provinces had seen the network as a lifeline as they struggled to cope with emergencies like the coronavirus pandemic.

On Sunday, preparations for rescue and relief efforts were also announced at the news conference.

The chief of the armed forces, Gen. Gilbert Gapay, said that about 4,000 soldiers, bolstered by 2,000 militia personnel and thousands of other reservists, were mobilizing to help local officials in evacuating residents in the path of the typhoon.

“We are closely working with local officials and we have activated our joint disaster task force,” he added.

Climate change is exacerbating the Philippines’ exposure to natural disasters.

Evacuating after a landslide that buried a mining community in Itogon, Benguet Province, in the northern Philippines, in 2018.Credit…Jes Aznar for The New York Times

The Philippines is situated on the so-called Ring of Fire, a seismically active swath encircling the Pacific Ocean that is vulnerable to earthquakes and volcanoes. Typhoons regularly batter the Philippine archipelago, packed with more than 100 million people.

Deadly floods and landslides are common. And now climate change is exacerbating the Philippines’ weakness to natural disasters, making it one of the most vulnerable countries on the planet, scientists say.

As sea-surface temperatures rise, the Philippines’ positioning in warm ocean waters means the country is being subjected to both bigger and more frequent tropical storms. Residents of low-lying, densely populated slums, such as those on the outskirts of Manila, the capital, are particularly exposed. So are miners and farmers who excavate and till mountainous earth, creating slippery, muddy conditions in which torrents of soil bury can people alive.

Mass deforestation, including the destruction of mangroves along the coastlines, has torn away natural barriers to wind and water.

The Asian Development Bank says that more than 23,000 people in the Philippines died from natural hazards from 1997 to 2016.

Dakila Kim P. Yee, a sociologist at the University of the Philippines Visayas Tacloban College, said, “Climate change is a big international idea, but we are facing this on the local level and we aren’t equipped with enough progressive vision for it.”

The country has honed a resilient national character because of its disaster-prone condition, Mr. Yee said.

After Typhoon Haiyan, one of the most powerful tropical storms on record, churned across the Philippines in 2013, killing more than 6,300 people, local governments began drawing up better evacuation plans.

But the coronavirus has complicated the current disaster response, Mr. Yee said. Displaced residents may fear the contagion spreading in typhoon evacuation centers, and some evacuation centers were converted earlier into Covid-19 quarantine facilities.

Goni is the 18th typhoon of the year for the Philippines, a country prone to storms.

Carrying the body of a victim in San Francisco, Albay Province, on Sunday.Credit…Shyneth Occidental Montero/Reuters

Goni, the 18th typhoon to strike the Philippines this year, arrived just days after Typhoon Molave tore through the country, dumping heavy rain and causing significant flooding. Molave killed 22 people and forced the evacuation of tens of thousands before moving on to Vietnam, where it caused deadly landslides.

A tropical depression west of the Philippines, Atsani, could become the 19th; it is forecast to strengthen into a typhoon by Wednesday, and hit the northernmost part of the country.

Ricardo Jalad of the Philippine disaster management agency said that evacuations in areas threatened by Goni began on Friday. Nearly a million people in southern Luzon had already been evacuated as of Saturday, the agency reported.

The Philippines is hit by at least 20 tropical storms and typhoons every year, some of them deadly. Thousands were killed in November 2013 when Super Typhoon Haiyan tore through the central Philippines.

Jason Gutierrez reported from Manila, and Hannah Beech from Bangkok.

Living Off The Land (& Sea) – Master Thy Chowder

How to Create Your Own Herbal Tea Garden