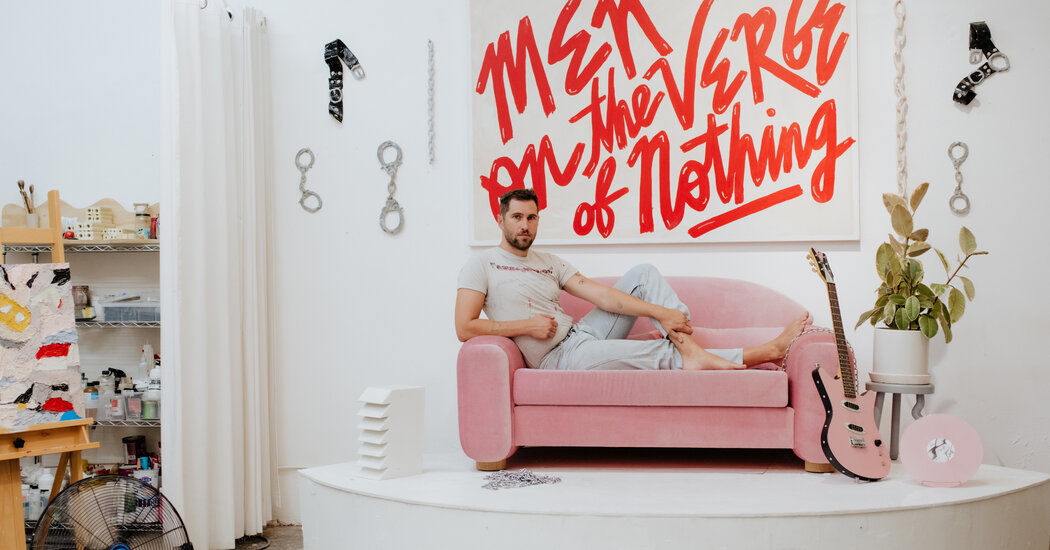 A lifelong fan of zines and riot grrrl music, Seth Bogart makes work that pays tribute to the secret histories that formed him.

Seth Bogart in his Highland Park, Los Angeles, studio. His latest self-released album is titled “Men On the Verge of Nothing.”Credit…Joyce Kim

Seth Bogart is sitting on the pale pink couch of his Highland Park, Los Angeles, art studio flanked by ceramic sculptures of bondage gear. Hanging above the grinning 40-year-old musician and visual artist, who is wearing a T-shirt for the germinal punk band the Cramps, is an outsize canvas that reads, in lipstick-red bubble letters, “Men On the Verge of Nothing.”

These scintillating works are Bogart originals. After nearly two decades on the campier, glammier edges of the rock underground with bands like Hunx and His Punx, he has become known, in recent years, as a polymath painter, illustrator, ceramist, clothing designer and the proprietor of the online shop Wacky Wacko, but more specifically, for curating a world of queer fantasy. His color-bursting installations have included a faux sex shop, as in 2018’s “Lick.” And among Bogart’s most beloved pieces are his sculptures of gay-bar matchbooks and delightfully subversive toothbrushes, and his brash “Grrrls Do Everything Better” shirts, depicting an illustrated history of women inventing punk.

T-shirts by Bogart to accompany his new solo album. “I learned about politics and queer culture from zines and riot grrrl music,” he says. “That’s how I shaped my life.”Credit…Joyce Kim Bogart included ceramics of bondage gear in his 2018 show “Lick.”Credit…Joyce Kim

We are talking over FaceTime one afternoon in early October on the occasion of Bogart’s first New York solo show — “Library Fantasy Volume I” — on view at Fierman Gallery. It presents 47 ceramic replicas of books — tributes to the secret histories and misfit intellectual pursuits that formed him, and Bogart’s latest expression of obsessive fandom in an oeuvre animated by it. “Library Fantasy” opened just two weeks before the release of Bogart’s new solo album, which brings to mind the droll Glaswegian indie pop of the Pastels and the Vaselines while taking on themes — echoed in the exhibition — of queer trauma. That anti-patriarchal slogan on his studio wall is the record’s title. If “Men On the Verge of Nothing” is, as Bogart says, about destruction — about how “men ruin the world” — then perhaps “Library Fantasy” is about creation. “It is a fantasy,” he notes. “If I had a bookstore, it’s what I’d want to sell.”

The sculpted titles range from the iconic — like works by Joan Didion and James Baldwin — to the gloriously cultish. A “Lesbian Classics” section (including the 1973 feminist bildungsroman “Rubyfruit Jungle” and the fetish magazine Splosh!) spans one wall. Yoko Ono’s mind-expanding collection of Fluxus art instructions, “Grapefruit” (1964), presides over another. Gay and punk periodicals abound. A considerable charm of these handmade literary doubles is how worn they appear: some are slightly misshapen, with tattered pages, dog-eared corners, or traces of price tags. “I wanted them to seem used and loved, like ‘I’ve had this since high school, and have been carrying it around and moved 100 times,’” Bogart says. “I like to make things fast and wonky. I’m interested in something looking kind of wrong.”

Image Ceramics in a corner of Bogart’s studio. A chair by the L.A. artist Jess Scott.Credit…Joyce Kim

The imperfections show the process of how books become talismans. Bogart’s rendering of the 1989 novel “Horse Crazy” — a tale of AIDS, infatuation and loneliness by the onetime Village Voice art critic Gary Indiana — reveals the cover’s noirish cityscape to be a world unto itself. (A Jenny Holzer marquee, “Protect Me From What I Want,” alights its scene of a dark night.) A ceramic of the 1990 story collection “Garden of Ashes” by the late East Village sage Cookie Mueller — who died of AIDS at 40 — finds her gazing out from the Hanuman Books miniature, a beacon of askew glamour. Another recreates the 1987 educational children’s book “AIDS: You Can’t Catch It Holding Hands.” These are totems to people who made art through forbidding years.

Which is to say, “Library Fantasy” centers the margins and celebrates interior worlds as sanctuaries. “For me a lot of it is about the importance of celebrating history that’s not told as much as it should be,” Bogart says. “So many gay publications were literally illegal. It’s cool to honor them, instead of taking for granted how much easier it is nowadays for some people.”

Bogart’s first ceramic book was “SCUM Manifesto” by the late radical feminist author Valerie Solanas. Self-published in 1967, “SCUM” stands for “Society for Cutting Up Men.” A year later, Solanas attempted to murder Andy Warhol at his studio in Union Square. Bogart has made three “SCUM” ceramics in total, and one is displayed in the window at Fierman. “I like Andy Warhol, but I agree with her politics more,” Bogart says. “Valerie Solanas would probably want to kill me.”

He’s long related to Solanas’s insurrectionary spirit. “If women had more power and control, the world wouldn’t look like this,” Bogart says. “I don’t think men have to die, but let women and non-cis white men take over. Otherwise we’re all going to die.”

The artist with the collection of zines he turns to for inspiration at his Highland Park studio.Credit…Joyce Kim

Bogart was born in Tuscon, Ariz., in 1980, though his inner self was brought alive by connecting with outsiders from everywhere. Knowing he was gay, he gravitated toward punk — by way of Kurt Cobain and a riot grrrl at his high school named Theresa — and began making his own zines, like Puberty Strike and Psycho No. 1 Fan. Through becoming pen pals with other zine writers, he met lasting comrades in art like the author Brontez Purnell, who would become his bandmate, as well as the feminist-punk luminary Kathleen Hanna, who would later bring his bands on tour to open for her multimedia trio Le Tigre.

“I learned about politics and queer culture from zines and riot grrrl music — that’s how I shaped my life,” Bogart says. The Bikini Kill song “Distinct Complicity” — penned by drummer Tobi Vail, who plays on “Men On the Verge of Nothing” — inspired him to not go to college: “You’re already 22/Don’t waste your time in school/You could go back anytime.”

It was also as a teen that Bogart discovered the formative twisted universe of the filmmaker John Waters, by way of “Hairspray” (1988) and later “Pink Flamingos” (1972), which starred Cookie Mueller. “She just seemed so fearless,” Bogart says of Mueller. “I grew up scared of stuff — maybe because I was gay, and was scared of being beat up. But she didn’t seem scared of anything.”

Bogart began painting after touring in punk bands like Hunx and His Punx for over a decade.Credit…Joyce Kim Raw materials at Bogart’s studio. “I like to make things fast and wonky,” he says.Credit…Joyce Kim

He had a fairly stable upbringing, with supportive parents who were a nurse and a lawyer, until the end of high school, when his father died by suicide. Not long after, Bogart packed his belongings into his Buick and joined his riot grrrl pen pals in Oakland, Calif., where he moved to a warehouse, dubbed Club Hot, with members of the post-punk band Erase Errata. To earn more money (he had worked at Kinko’s and in telemarketing) Bogart decided to enroll in beauty school. Hairdressing allowed him to work only a few days a week and to take off at will to tour the world — by that point, with his electroclash troupe Gravy Train!!!!, which released music with the feminist label Kill Rock Stars. They were wild years, and Bogart says it wasn’t until his 30s, when he moved to L.A., that he began to really grapple with his father’s death.

It was also in L.A. that Bogart first showed his work in a gallery. His bubblegum-punk ensemble Hunx and His Punx was winding down, and he’d begun making loud clothing under the umbrella of Wacky Wacko. His friend Wendy Yao, another high school pen pal — he was a fan of her band Emily’s Sassy Lime — asked him to do an art show at her gallery, Ooga Booga, after seeing the papier-mâché sculptures he’d made for Hunx videos. The experience encouraged him to keep going.

But Bogart’s ensuing gallery experiences were dispiriting. The first song on “Men On the Verge of Nothing,” called “Professionals,” is a critique of the darker mechanisms of exploitation in the art world, and a reminder to himself to trust his instincts. “I had this terrible experience with an art dealer guy in L.A. who was a monster psychopath who only cared about money,” he says. “Artists are conditioned to just accept how these people act. But I’m from a world where it’s like: You don’t have to accept that. You don’t have to work with people like this.”

He doesn’t feel that way about David Fierman, however, whom he lovingly calls “an old riot grrrl.” The gallerist, who opened on the Lower East Side in 2016, was a 21-year-old college student when he first saw Bogart play with Gravy Train!!!! in 2004. Fierman highlights his and Bogart’s shared “strong desire to preserve queer culture and honor our elders.”

“To me it’s all one story and one project, and it’s just evolved,” Bogart says of his work. In some sense the bookish roots of “Library Fantasy” — how fandom creates meaning, or how reading can help, to quote another Bikini Kill song, “resist psychic death” — extend back to the fanzines of his youth. “When people became fans of mine, I thought, ‘This is weird. What’s going on?’ I never wanted that to go to my head. I always wanted to be like, ‘No, I’m the fan!’”

Among those younger fans is the British pop singer Charli XCX, who asked Bogart to create art for her single “Forever” earlier this year. She owns three of his ceramic toothbrushes, and a Bogart painting of the word “CHEEKS” hangs in her kitchen. “If I were ever a visual artist, I’d want to make work like Seth’s,” Charli wrote in an email. “It feels provocative and unapologetic and clever. It’s so devourable. His work is very much akin to pop music in my eyes.”

It would seem that Bogart is ever a man on the verge of much, though he says he still keeps his hairdressing license, just in case. He was not especially inspired by that job, he admits. But studying cosmetology back at Laney College — where he mastered the ropes of perms, relaxers, makeup, facials, hair dye and acrylic nails — was part of his process of learning to fend for himself, to survive. Bogart became “obsessed with products,” which he now sculpts.

And he loved beauty school: witnessing the explosive fights among his fabulous fellow students, the clashes with authority, the chaos and drama. “It was like a John Waters movie,” he says. “I cried on the last day because I loved my classmates, and I thought, ‘I’m never going to see them again!’”

“I still have notes,” Bogart says. “I might write a book about it one day.”

How Will I Ever Look at America the Same Way Again?

Creator of ‘All Rise’ on CBS Is Fired After Writers’ Complaints