Some Covid Survivors Have Antibodies That Attack the Body, not Virus 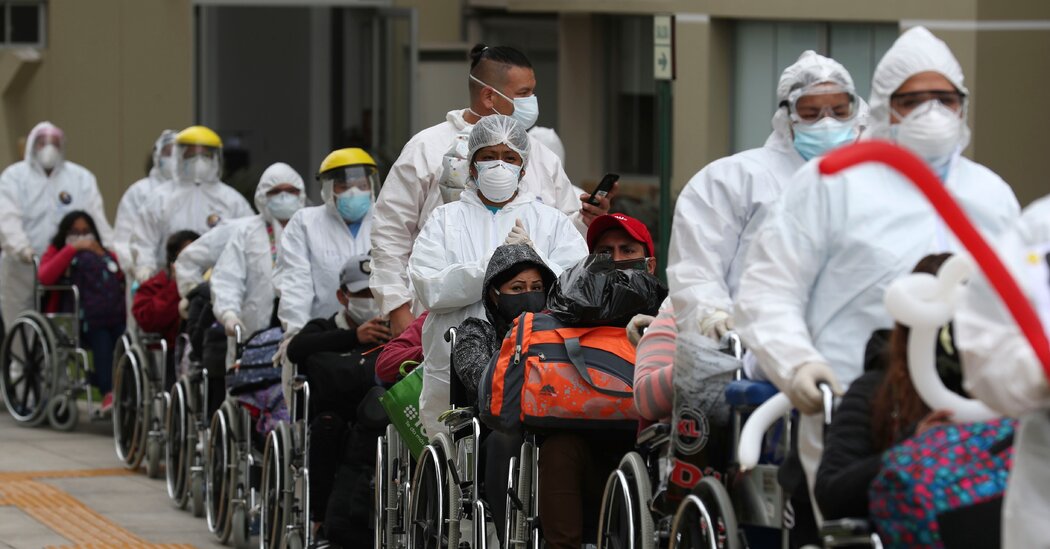 New research found ‘autoantibodies’ similar to those in lupus and rheumatoid arthritis patients. But patients may also benefit from treatments for those autoimmune diseases.

Covid-19 patients were discharged from a temporary hospital in Lima, Peru, last month. The study may help explain why so-called “long-haulers” continue to experience symptoms long after the virus has left their bodies.Credit…Martin Mejia/Associated Press

Some survivors of Covid-19 carry worrying signs that their immune system has turned on the body, reminiscent of potentially debilitating diseases like lupus and rheumatoid arthritis, a new study has found.

At some point, the body’s defense system in these patients shifted into attacking itself, rather than the virus, the study suggests. The patients are producing molecules called “autoantibodies” that target genetic material from human cells, instead of from the virus.

This misguided immune response may exacerbate severe Covid-19. It may also explain why so-called “long haulers” have lingering problems months after their initial illness has resolved and the virus is gone from their bodies.

The findings carry important implications for treatment: Using existing tests that can detect autoantibodies, doctors could identify patients who might benefit from treatments used for lupus and rheumatoid arthritis. There is no cure for these diseases, but some treatments decrease the frequency and severity of flare-ups.

“It’s possible that you could hit the appropriate patients harder with some of these more aggressive drugs and expect better outcomes,” said Matthew Woodruff, an immunologist at Emory University in Atlanta and lead author of the work.

The results were reported Friday on the preprint server MedRxiv, and have not yet been published in a scientific journal. But other experts said the researchers who carried out the study are known for their careful, meticulous work, and that the findings are not unexpected because other viral illnesses also trigger autoantibodies.

“I’m not surprised, but it’s interesting to see that it’s really happening,” said Akiko Iwasaki, an immunologist at Yale University. “It’s possible that even moderate to mild disease may induce this kind of antibody response.”

For months it has been clear that the coronavirus can cause the immune system to run amok in some people, ultimately wreaking more damage to the body than the virus itself. (Dexamethasone, the steroid President Trump took after his Covid diagnosis, has proved effective in some people with severe Covid to tamp down this over-exuberant immune response.)

Viral infections cause infected human cells to die. Sometimes the cells die a quiet death — but sometimes, and especially in the throes of severe infection, they can blow up, strewing their innards. When that happens, DNA, normally cloistered in coiled bundles inside the nucleus, is suddenly scattered and visible.

In the typical response to a virus, cells known as B immune cells make antibodies that recognize pieces of viral RNA from the virus and lock onto them.

But in conditions like lupus, some B cells never learn to do this and instead produce autoantibodies that glom onto DNA debris from dead human cells, mistaking them for intruders. Something similar may be happening in patients with Covid-19, the research suggests.

“Anytime you have that combination of inflammation and cell death, there is the potential for autoimmune disease and autoantibodies, more importantly, to emerge,” said Marion Pepper, an immunologist at the University of Washington in Seattle.

Dr. Woodruff and his colleagues reported earlier this month that some people with severe Covid-19 also have such unrefined B immune cells. The finding prompted them to explore whether those B cells make autoantibodies.

In the new study, the researchers looked at 52 patients within the Emory health care system in Atlanta who were classified as having either severe or critical Covid-19, but who had no history of autoimmune disorders.

“It’s not just that these patients have an autoimmune-like immune response,” he said. “It’s that those immune responses are coupled with actual true testable clinical auto-reactivities.”

Some of the autoantibodies the researchers identified are associated with blood flow problems, noted Ann Marshak-Rothstein, an immunologist and lupus expert at the University of Massachusetts, Worcester.

“It’s very possible that some of the coagulation issues that you see in Covid-19 patients are being driven by these kinds of immune complexes,” she said.

If the autoantibodies do turn out to be long-lasting, she said, they may result in persistent, even lifelong, problems for Covid-19 survivors.

Dr. Marshak-Rothstein, Dr. Iwasaki and dozens of other teams are closely studying the immune response to the coronavirus. Given the ease of testing for autoantibodies, it may soon become clear whether the antibodies were identified only because the researchers went looking for them, or whether they represent a more permanent alteration of the immune system.

“It’s not clear to me what it all means at this point,” Dr. Pepper said. “It’s going to take a little bit of time to understand if this is something that’s going to lead to downstream pathology.”

Matt Gaetz Is in Deep Trouble