How Will I Ever Look at America the Same Way Again? 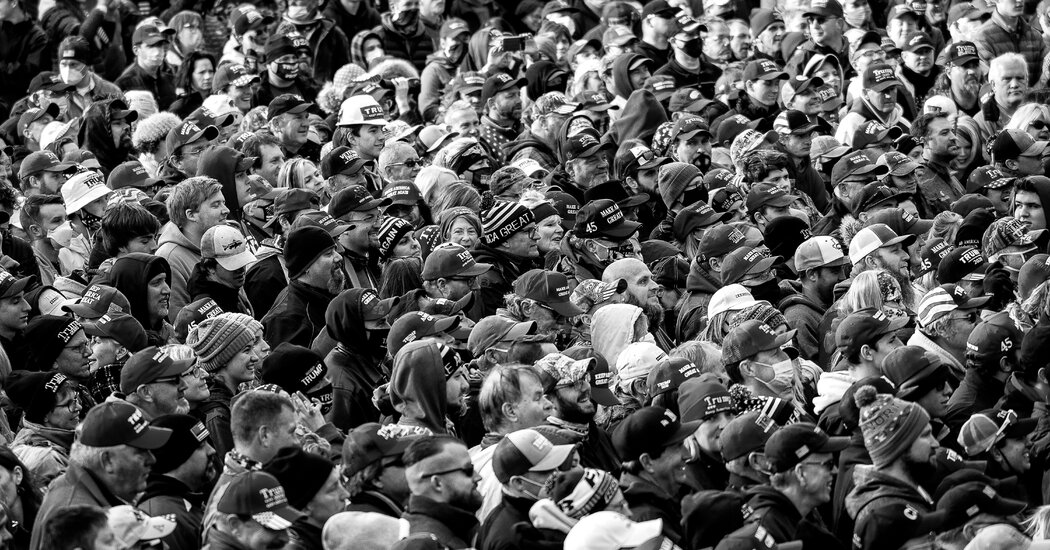 What I lost in the Trump years was a kind of innocence.

It’s always assumed that those of us who felt certain of Hillary Clinton’s victory in 2016 were putting too much trust in polls.

I was putting too much trust in Americans.

I’d seen us err. I’d watched us stray. Still I didn’t think that enough of us would indulge a would-be leader as proudly hateful, patently fraudulent and flamboyantly dishonest as Donald Trump.

We had episodes of ugliness, but this? No way. We were better than Trump.

Except, it turned out, we weren’t.

Never mind that the Russians gave him a boost. Or that he lost the popular vote. Some 46 percent of the Americans who cast ballots for president in 2016 picked him, and as he moved into the White House and proceeded to soil it, most of those Americans stood by him solidly enough that Republicans in Congress didn’t dare to cross him and in fact went to great, conscience-immolating lengths to prop him up. These lawmakers weren’t swooning for a demagogue. They were reading the populace.

And it was a populace I didn’t recognize, or at least didn’t want to.

What has Trump’s presidency taken from us? I’m reasonably sure that many Americans feel the same loss that I do, and I’m struggling to assign just one word to it.

Innocence? Optimism? Faith? Go to the place on the Venn diagram where those states of mind overlap. That’s the piece of me now missing when I look at this beloved country of mine.

Trump snuffed out my confidence, flickering but real, that we could go only so low and forgive only so much. With him we went lower — or at least a damningly large percentage of us did. In him we forgave florid cruelty, overt racism, rampant corruption, exultant indecency, the coddling of murderous despots, the alienation of true friends, the alienation of truth itself, the disparagement of invaluable institutions, the degradation of essential democratic traditions.

Polls from mid-October showed that about 44 percent of voters approved of Trump’s job performance — and this was after he’d concealed aspects of his coronavirus infection from the public, shrugged off the larger meaning of it, established the White House as its own superspreader environment and cavalierly marched on.

Forty-four percent. Who in God’s name are we?

I’m not forgetting pre-Trump American history. I’m not erasing hundreds of years of slavery, the internment of Japanese Americans, the many kinds of discrimination that have flourished in my own lifetime, all the elections in which we Americans made stupid choices and all the presidents who did “un-American” things. We’re a grossly imperfect country, our behavior at frequent odds with our ideals.

But for every abomination, I could name a moment of grace. For many of our sins, stabs at atonement. We demonstrated a yearning to correct our mistakes and, I think, a tropism toward goodness. On balance we were open, generous. When I traveled abroad, people from other countries routinely complimented Americans for that. They experienced us as arrogant, but also as special.

Now they just pity us.

How much of this can we pin on Trump? Not as much as we try to. And oh, how we’ve tried. This obsession of the news media and his detractors with every last eccentricity and inanity isn’t just about keeping a complete record, I’ve come to realize. It’s also a deflection, an evasion: If he gets the whole of the stage, then Americans’ complicity and collaboration are shoved into the wings.

And the freakier we make him out to be, the less emblematic he is. The more he becomes a random, isolated event. We emphasized what a vanquishable opponent Hillary Clinton was because that diminished the significance of the vanquishing and the vanquisher. We spoke of a perfect storm of circumstances that led to his election as a way of disowning the weather.

We cheered on Robert Mueller’s investigation not just because it might hold Trump and his wretched accomplices to account but also because it might explain him away, proving that he reached the White House by cheating, not because he was what nearly half of the country decided that they wanted.

We tried to make him a one-and-done one-off. But deep into his presidency, when his execrable character had been fully exposed, his Fox News cheerleaders continued to draw huge audiences for their sycophantic panegyrics.

Trump himself continued to attract big crowds to his rallies, like the one in Greenville, N.C., in July 2019, when he pressed his attack on four Democratic congresswomen of color, including Representative Ilhan Omar, who immigrated from Somalia. Egged on by him, his audience chanted: “Send her back! Send her back!” He stopped speaking to give those words room, and he soaked them in.

Or what about the recent rally in Muskegon, Mich., where he freshly assailed the state’s governor, Gretchen Whitmer, despite the fact that his obsessive denunciations of her had possibly been a factor in an alleged plot by 14 men to kidnap her? “Lock her up!” many of the attendees bellowed, to Trump’s obvious amusement.

Again, how has his approval rating not fallen to negative integers?

I’m not saying that support for him is spun entirely of malice or bias. Keen economic anxiety and profound political estrangement are why many voters turned to him, as my Times colleague Farah Stockman explained especially well in a recent editorial that was set in America’s disheartened heartland. “Even false hope,” she noted, “is a form of hope, perhaps the most ubiquitous kind.”

The headline on the article was “Why They Loved Him.” But why haven’t more of them stopped loving him? And how did so many Americans beyond that group fall so hard for him, thrilling to his recklessness, applauding his divisiveness, indulging his unscrupulousness? He tapped into more cynicism and nihilism than this land of boundless tomorrows was supposed to contain.

He tapped into more conspiratorialism, too. And I do mean “tapped.” Trump didn’t draw out anything that wasn’t already there, burbling beneath the surface.

He didn’t sire white supremacists. He didn’t script the dark fantasies of QAnon. He didn’t create all the Americans who rebelled against protective masks and mocked those who wore them, a selfish mind-set that helps explain our tragic lot. It just flourished under him.

I could be overreacting. Maybe, just ahead, there will be moments of grace, enough of them to redeem us. Maybe I’ll look up on or after Nov. 3 and see that Biden has won North Carolina, has won Michigan, has won every closely contested state and the presidency in a landslide. Maybe I’ll have to eat my words.

Please, my fellow Americans, feed me my words. I’d relish that meal.