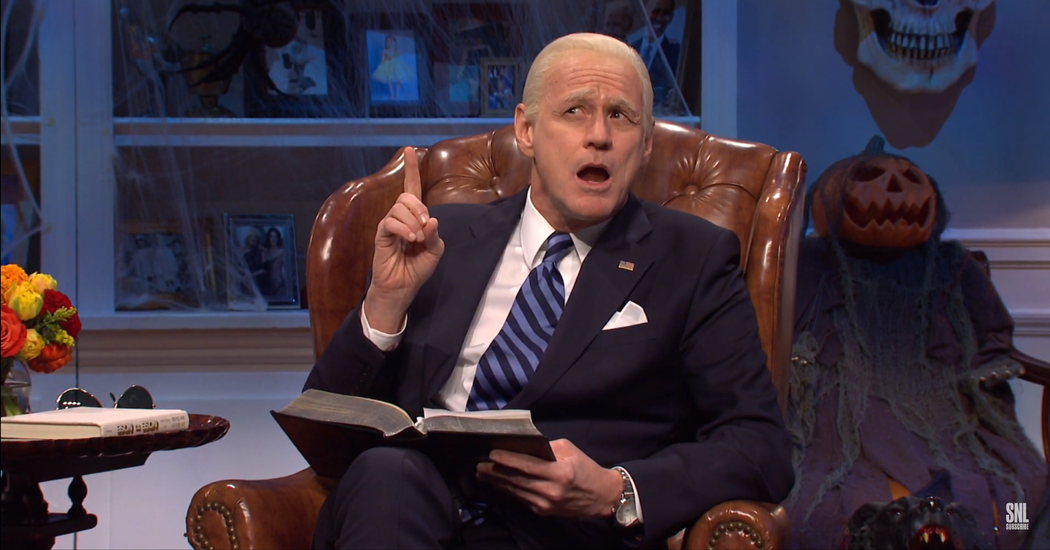 Carrey appeared in his recurring role as Joe Biden in a Halloween episode hosted by the “Saturday Night Live” alum John Mulaney and featuring the Strokes as the musical guest.

Instead of having a raven knocking at his chamber door, Joe Biden (as played by Jim Carrey) had a visitor of a different kind on “S.N.L.” — someone who “was still a little sore.”Credit…NBC, via YouTube

On a Halloween night that fell on a fraught weekend before Election Day, a nation turned its lonely eyes to John Mulaney, the “Saturday Night Live” alum whose return appearances to this sketch show are usually a good omen.

With no more presidential debates to lampoon, “S.N.L.” opened its latest broadcast with Jim Carrey, in his recurring role as Joe Biden, reading a parody of Edgar Allan Poe’s “The Raven,” updating the poem for the 2020 presidential race.

Noting that it was Halloween (“For some Trump voters, it’s the only day they’ll wear a mask,” Carrey said), he observed that Election Day was approaching and that many Americans were “very, very, very worried about the outcome.”

Carrey continued: “But don’t worry; they say I’m eight points ahead. Poll numbers like that can only go wrong once in a blue moon.” Then he looked out his window and observed that there was, in fact, a blue moon. “That’s a little troubling,” he said.

Then, after discarding a copy of “Triggered” by Donald Trump Jr. (which he said was “a little too scary”), Carrey began to read from what he said was a volume by Poe:

Once upon a midnight dreary,

And rifled through his Adderall drawer,

I was writing my acceptance speech

When something stopped me with a screech.

It was a knock upon my chamber door.

It was someone still a little bit sore.

It made me scared of four years more

“We lost before,” McKinnon said.

Carrey’s Biden said to her: “But this time is different, I can win. The people know I have a plan.”

McKinnon responded, “But your real advantage is you’re not a woman, you’re a man.”

Carrey’s last visitor was Maya Rudolph in her recurring role as Kamala Harris. Alternating lines, they delivered a final verse:

So whatever happens America, know that we’ll be OK.

Our nation will endure. We will fight another day.

I’m sure it will be peaceful, no matter who has won,

Use your voice and use your vote. Democracy will represent.

This daylight saving time, let’s gain an hour and lose a president.

Mulaney, who was hosting “S.N.L.” for the fourth time (alongside the New York-based musical guest the Strokes, who were also appearing on the show for the fourth time), used his opening monologue to riff about how New York had stayed resilient through the coronavirus pandemic. As a comedian, he said, he belonged to the group of “last responders.”

Although he has been heartened to see New Yorkers wearing masks, he said, he was a little sad “because it prevents you from overhearing conversations on the street, and that is one of this city’s greatest joys.” He told a story of walking downtown in December and hearing another pedestrian say on his cellphone: “No, no, no, I can’t meet right now. I’m way uptown.” Mulaney added, “And then he looked at me, and he winked and he kept walking.”

Following the election, Mulaney said: “We might have the same elderly man or we might have a new elderly man. Just rest assured, no matter what happens, nothing much will change in the United States. The rich will continue to prosper while the poor languish. Families will be upended by mental illness and drug addiction. Jane Lynch will continue to book lots of projects, and when she does, she’ll deliver. She’s so good at being on TV.”

Mulaney also wondered whether his 94-year-old grandmother should be allowed to vote (“You don’t get to order for the table when you’re about to leave the restaurant”), then chided himself for being ageist.

“That would be like calling yourself the Greatest Generation,” he said. “ ‘Oh, we fought the Nazis.’ Well, we’re trying to fight the new Nazis if you’d get out of the way and stop voting for people you saw in between coin-collector commercials.”

At the Weekend Update desk, the anchors Colin Jost and Michael Che riffed on President Trump’s closing message in the days before the election.

Well, the election, guys, is three days away, and after all this time, Trump, I think, has finally found a winning message. [Plays video of Trump saying, “You know our doctors get more money if somebody dies from Covid.”] That’s our president, recently saved by doctors, saying doctors want more Covid for money. Which makes me think Trump only survived Covid so he wouldn’t have to pay his doctors. Unfortunately, Trump’s gaslighting isn’t quite enough to keep you warm, because multiple Trump supporters who were stranded at a freezing cold rally in Nebraska were hospitalized with hypothermia — I assume because Trump told them that jackets don’t work.

He asked viewers not to worry because “the president isn’t trying to kill his supporters; he’s actually succeeding at killing his supporters.” According to a study, he went on:

over 30,000 Covid cases and 700 deaths have been tied directly to Trump rallies. That means he’s officially killed more people across the Midwest than Jeffrey Dahmer and John Wayne Gacy combined. Which is also kind of what Trump looks like. In the end, I guess that Trump was right, that he is not a typical politician, since politicians don’t typically spend the last of the election murdering their own voters.

Che picked up on the riff with details about the rapper Lil Wayne’s recent meeting with Trump to discuss the president’s Platinum Plan, or as Che described it, “Trump’s FUBU platinum plan for the Black community.” (“I don’t know what it’s actually called,” he added.)

Many are surprised by Lil Wayne’s endorsement of Trump. But keep in mind, Lil Wayne puts cough syrup in his Sprite, so, grain of salt. It’s weird that I have to tell politicians this but rappers are not Black leaders. They’re just rappers. Stop negotiating with them. They only do this with Black people. I never saw a candidate talking to Gilbert Gottfried about what to do with Israel. That’d be insulting, right? Plus, rappers are just way too busy to be leaders anyway. I love Ice Cube but you know how many jobs he had on top of negotiating for Black people? You know why Malcolm and Martin were such great leaders? Because they weren’t also working on “Barbershop 4.”

Because this was an episode hosted by John Mulaney, that dictated that there must also be another entry in his continuing series of musical sketches set in emblematic New York storefronts. This latest segment took place in a Times Square souvenir shop whose proprietor was played by Mulaney and whose customers included Redd and Pete Davidson.

When Davidson contemplated buying a well-worn pair of underwear briefs bearing the “I NY” logo, it triggered a series of musical numbers performed by the cast, including parodies of “Luck Be a Lady” (“Mascots Be Shady Tonight”) and “Hey Big Spender” (“Super Spreader”).

Dressed as the Statue of Liberty, Maya Rudolph sang a rousing rendition of “I’m Still Here,” with lyrics that went: “Stepped over bodies drawn in chalk / I knew Son of Sam, the dog could talk / I do the marathon, but I walk / And I’m here.”

Set to an irresistible R&B groove, “Strollin’” is a topical tune featuring Thompson, Redd, Ego Nwodim and Punkie Johnson as four Black voters who seem blissfully calm as they get ready to participate in the election (As Redd sings: “Been hoping for so long, for November 3rd / It’s time to march on down, get our voices heard”) — only to find that every polling station they visit has been shut down.

The quartet endures closed roads, muscle cramps and a walk along a busy highway before arriving at a polling station with a three-hour-long line. Will they successfully cast their votes? The results may or may not surprise you!

TV Taught Me About AIDS. ‘It’s a Sin’ Reminded Me How Far We’ve Come.