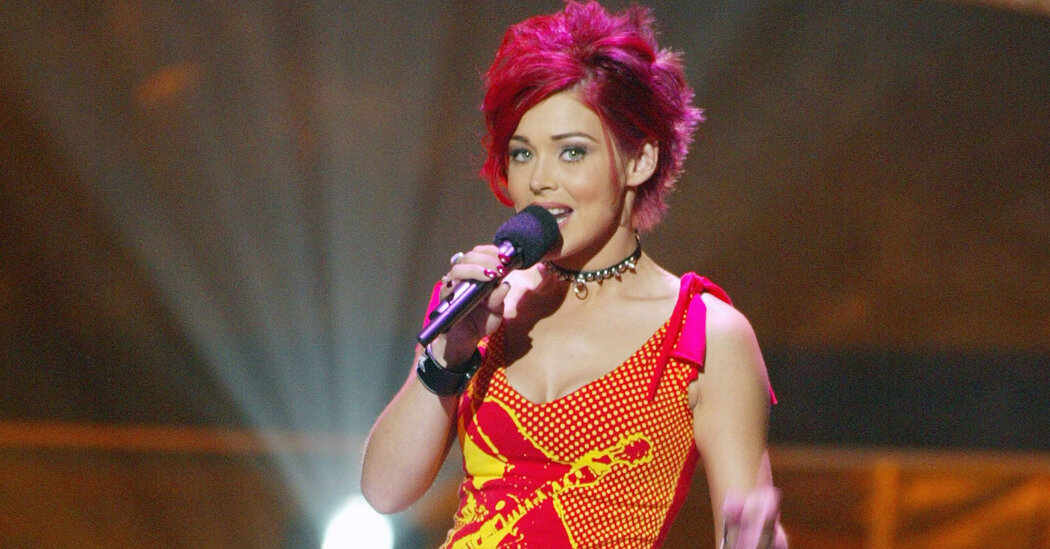 Ms. McKibbin, who finished third on the inaugural season of the reality talent show in 2002, died on Sunday after a brain aneurysm, her husband said.

Nikki McKibbin, a singer-songwriter from Texas best known for her third-place finish on the inaugural season of “American Idol,” died on Sunday. She was 42.

Ms. McKibbin’s death was confirmed by her husband, Craig Sadler, who said on Facebook that she was taken off life support early Sunday morning, four days after she experienced complications from a brain aneurysm. Her son, Tristen Langley, said she died in a hospital in Arlington, Texas.

“She was so loved that I know thousands of you will be grieving with us,” Mr. Sadler wrote.

Ms. McKibbin rose to national fame in 2002 as a contestant on “American Idol,” the Fox reality show in which singers competed for a record deal. Appearing with an unabashedly punk style, complete with a shock of dyed red hair, she was praised for her soulful covers, including “Total Eclipse of the Heart” by Bonnie Tyler, “Black Velvet” by Alannah Myles and “Piece of My Heart,” which Janis Joplin made famous with Big Brother and the Holding Company.

She finished third on the show, behind Kelly Clarkson, the winner, and Justin Guarini.

“Nikki McKibbin was an incredible talent and we are deeply saddened by the news of her passing,” a spokeswoman for “American Idol” said in a statement. “She was part of our ‘American Idol’ family and will be truly missed. Our hearts and prayers go out to her family and friends during this difficult time.”

A longtime fan of Stevie Nicks, Ms. McKibbin covered her song “Edge of Seventeen” in one of her final performances on the show. During Ms. McKibbin’s time on “American Idol,” Ms. Nicks sent her flowers and a card that read, “You are the Gypsy that I was,” Mr. Guarini said on Instagram.

The gesture put Ms. McKibbin “on cloud nine and the joy and excitement that radiated from her was infectious,” he said.

Mr. Guarini said Ms. McKibbin “was a fiery, funny lady who could sing the Hell out of a rock song with the same kind of ease and command she lovingly used to cut you with her twangy Southern wit.”

Ryan Seacrest, the longtime “American Idol” host, wrote on Twitter that Ms. McKibbin “was a superstar the moment she walked into auditions.”

“She set the bar high with her talent and memorable stage presence,” he said. “It was an honor to watch her grow and inspire millions of people.”

During Ms. McKibbin’s time on “American Idol,” her son Tristen, who was 4, handed her a rose after a performance. In 2014, Ms. McKibbin accompanied her son, then 15, when he auditioned for the show. As he sang a cover of Sublime’s “Santeria,” she mouthed the words.

“We just want the world to know, out of all of the wonderful things she was, the most important thing to us is that she was an extraordinary wife, the most amazing mother a son could ever ask for, and an angel of a grandmother,” Mr. Langley said on Sunday.

After “American Idol,” Ms. McKibbin signed a record deal with RCA Records, a division of Sony Music, but clashed with the label when she refused to record a country album, Variety reported. Her debut album, “Unleashed,” was released in 2007 by the Chenoa Music label.

Ms. McKibbin’s struggles with substance abuse, including alcohol and cocaine, were chronicled on “Celebrity Rehab with Dr. Drew” and “Sober House,” both on VH1, Variety reported. She also appeared on “Fear Factor” on NBC, and “Battle of the Network Reality Stars” on Bravo.

In addition to her husband and son, Ms. McKibbin is survived by a daughter, Carlie Sadler; her father, Keith McKibbin; a grandmother, Hazel Bunyea; and a granddaughter, Letti Sadler. She was predeceased by her mother, Teresa.

Mr. Sadler said on Facebook that his wife was taken off life support in the early hours on Sunday and her organs were donated. Before the operation began, he said, they played “Landslide,” one of Ms. Nicks’s signature songs with Fleetwood Mac, one last time.

Barbra Streisand, Patti LaBelle and Dolly Parton on Their Most Memorable Performances