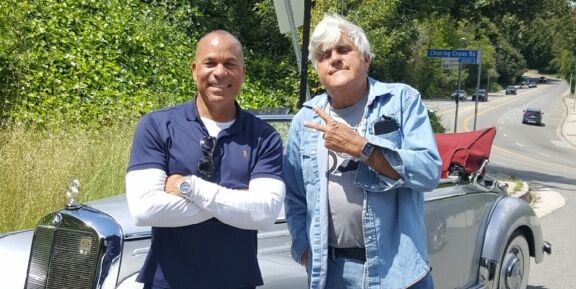 The comedian and former Tonight Show host turns 70 today, and confirmed in a Bill Maher interview last week that he has a couple 3D printers in his garage and has set them to manufacture clear plastic shields around-the-clock.

“We make them and we give them to the fire department and they hand them out to first responders and hospital workers,” he says.

“They run 24 hours a day and keep churning them out,” he told Maher. “At the end of the week we give them away.”

RELATED: Tyler Perry Picks Up the Tab for All Groceries Purchased During Senior Shopping Hour at 73 Supermarkets

“And it’s fun. It’s great to feel like you’re part of something and sort of helping out—not just having food delivered every five minutes.”

Leno also stopped on the side of the road in LA this month to help a stranded motorist named Dwayne Henry (see photo below), who was having brake problems in his 1953 Mercedes Benz.

Leno was driving an electric Tesla when he pulled over to help diagnose the car trouble.

He appeared in many auto trade publications last week after he unearthed a video for his YouTube channel featuring a youthful Elon Musk persuading him to become a fan of the Tesla EV.

It was a never-before seen video recorded in Leno’s garage, where, since 2014, the Emmy Award-winner has produced and hosted Jay Leno’s Garage, which features his exquisite classic car collection.

The CEO stopping by the shop with the actual black Tesla Roadster that was the very first customer model ever made, which had a VIN number of 001. Leno and Musk discussed the unique properties of the electric sports car, with a tour and a test drive. (Watch the video on GNN here, of young Musk and Leno.)

Until the COVID-19 pandemic, Leno regularly entertained over 200 audiences every year with his standup routines touring the country. He also has volunteered to perform in USO shows for soldiers and has been known to give away gorgeous cars to veterans.

SHARE the Celebrity Good News With Your Friends on Social Media…

Q&A: Seth Mnookin on Covid-19 and the public understanding of science