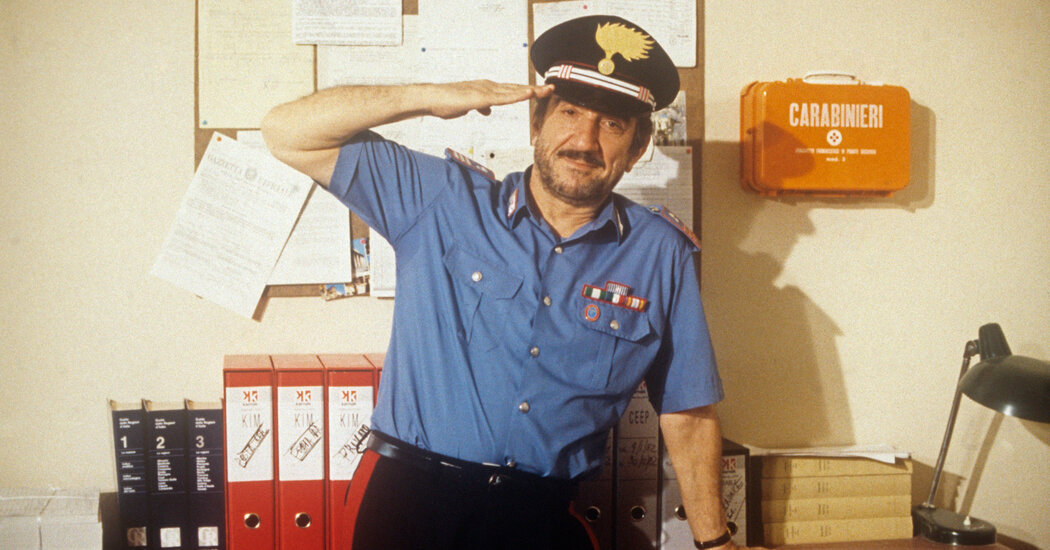 Beloved in Italy, he was best known as the star of a TV series playing a small-town police chief. He also had a long film career and a popular one-man stage show.

Gigi Proietti, one of Italy’s most beloved actors, in 1995 in his best-known role, as a police chief in the comedy-drama series “Il Maresciallo Rocca.” Credit…Rino Petrosino/Mondadori via Getty Images

ROME — Gigi Proietti, a versatile actor who personified the sardonic, sometimes rough-hewn humor of his fellow Romans and was best known as the star of a long-running television series playing a small-town police chief, died here on Monday, his 80th birthday.

The cause was heart failure, said a spokeswoman for the Globe Theater in Rome, where he had been artistic director since 2003.

Mr. Proietti began his acting career in Rome’s experimental theater scene but quickly took center stage in a renowned one-man show — a mélange of jokes, traditional songs and touching sketches called “A Me Gli Occhi, Please” (“All Eyes on Me, Please”). The show drew some 500,000 spectators during its run in a Rome circus tent from 1976 to 1978.

He became a television star in variety shows, comedies and dramas, mostly on Italy’s national broadcaster. He played the chief in the Carabiniere, Italy’s paramilitary police force, in the hugely popular series “Il Maresciallo Rocca,” a mix of comedy and drama that ran intermittently for five seasons from 1995 to 2006 and continues to be seen in re-runs.

Mr. Proietti often played on his Roman roots. “A measured use of dialect adds expressiveness, realism, living flesh to acting,” he wrote in his 2013 autobiography, “Tutto Sommato” (“All Things Considered”).

Yet his appeal was nationwide.

“Proietti has always represented, with a professionalism equal only to his passion, the prototype of the actor who hams it up, a little vain and contemptuous but highly intelligent, giving the public unforgettable sketches, formidable caricatures and irresistible parodies,” Aldo Grasso, the chief television critic for Milan daily Corriere della Sera, wrote.

Image Mr. Proietti as a race-track denizen in the 1976 movie “Febbre da Cavallo” (“Horse Fever”). He was “an extraordinary interpreter of the Roman spirit,” Rome’s mayor said.Credit…Movietime

Luigi Proietti was born on Nov. 2, 1940, and raised in a Rome palazzo, where his father worked as the doorman. He wrote in his autobiography that he was happy to “have been born there, in the absolute center of the city, even if I have no recollection of that time.”

His father, Romano Proietti, was a jack-of-all-trades who eventually went to work for the national combustible fuels agency — his dream job, because in public administration in Italy one was hired for life. His mother, Giovanna Ceci, was a housewife.

The family, including an older sister, Annamaria, was poor, like so many others that had moved from the countryside to the capital to seek their fortune. “We had the desire and the strength to pull ourselves out without even losing our dignity,” Mr. Proietti wrote. “There is hope in poverty.”

He learned to play the guitar as a teenager, listening to songs by Elvis Presley, Fats Domino and the Platters and figuring out the chords. What started as a hobby became a job when he began playing in Rome nightclubs.

It was during one of these gigs, nearly 60 years ago, that he first encountered Sagitta Alter, a Swedish tour guide. She became his lifelong companion, though they never married. She survives him, along with his daughters Susanna, a costume designer, and Carlotta, a singer and actress.

Mr. Proietti began studying law at the University of Rome, but his heart was never in it, he later said. But he signed up for the university theater club and soon joined Gruppo 101, one of the experimental theater groups that sprang up in Rome in the 1960s, a period he described as “confused but alive; everything was in continuous contraposition.”

The group’s performances were almost always followed by long debates with the audience, which he jokingly compared to the “inhuman self-critical sessions that Maoist tribunals imposed on dissidents.”

“We couldn’t wait to have a shower and go to a pizzeria, but we were forced to stand there,” he said.

Mr. Proietti in 2018. Like many actors in Italy, he began his movie career dubbing English-language films for actors like Richard Burton, Marlon Brando and Dustin Hoffman.Credit…Claudio Onorati/European Press Agency

That kind of theater didn’t pay the bills, so, like many professional actors in Italy, he began dubbing English language films. One of his first jobs was dubbing Richard Burton in “Who’s Afraid of Virginia Woolf?” (1966). He went on to lend his voice to Dustin Hoffman, Marlon Brando, Sylvester Stallone and Sylvester the cat of Looney Tunes fame.

Mr. Proietti soon began working in television and films. He was handsome, but not in a marquee way: He liked to joke that when he played Cyrano de Bergerac in a 1985 television movie, he offered to save the producers money by skipping the prosthetic nose. He worked mostly with Italian directors, but not only. He had one memorable scene with Vittorio Gassman in Robert Altman’s 1978 ensemble comedy “The Wedding.”

The 1976 comedy “Febbre da Cavallo” (“Horse Fever”), in which he played a well-dressed inveterate gambler, has become a cult classic in Italy.

Mr. Proietti wrote that he had never seriously considered acting in the theater until, in 1970, he was hired at the last minute to fill in for Domenico Modugno (the Italian singer of “Volare” fame) in a musical at the Sistina, Rome’s leading musical theater. It was a turning point in his career, leading to his one-man show.

He was artistic director of several theaters in Rome, most successfully at the Globe, which was built in the Villa Borghese in 2003 to feature works by Shakespeare and others. He also opened and directed an acting school in Rome.

“I tried not to teach anything,” he wrote. “I advised the students, tried to show them a way, tried to make them read as much as possible.”

Though he loved Rome, it was a complicated relationship.

“I was born in Rome and lived here all my life,” he wrote in his autobiography. “I got everything from Rome, I have had disappointments, I owe Rome what I am, and I gave to Rome what I could.”