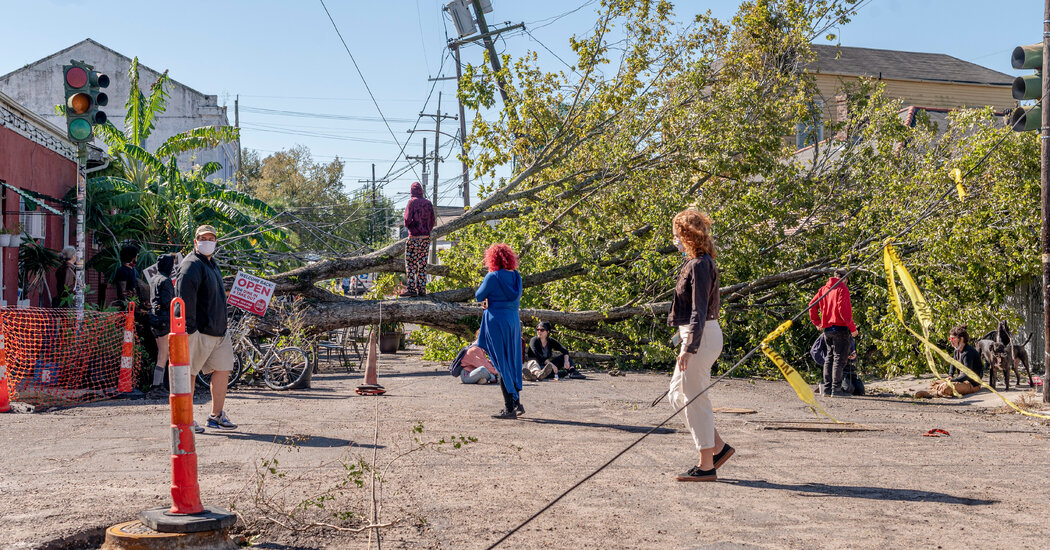 In October, Hurricane Zeta, which knocked out power for two million people, was one of 28 named storms of this year’s hurricane season.Credit…Emily Kask for The New York Times

Tropical Storm Eta, the 28th named storm of a fiercely active hurricane season, churned over the Caribbean on Sunday, gaining strength as it headed west toward Central America, the National Hurricane Center said.

Meteorologists expected that the storm would strengthen to a hurricane by Sunday night and that it would reach the coast of Central America on Monday night or early Tuesday. It was forecast to make landfall along the Nicaragua coast as a strong Category 2 hurricane, the Hurricane Center said.

A hurricane watch and warning have been issued for portions of Nicaragua and Honduras, where the Hurricane Center said there could be risks of storm surge, hurricane-force winds and heavy rain. The government of Honduras also issued a tropical storm warning for part of its coast.

Eta was moving west at 15 miles per hour with maximum sustained winds of 65 miles per hour, according to an advisory the Hurricane Center issued at 4 p.m. Eastern.

The storm is expected to bring as much as 20 inches of rain to parts of Guatemala and Belize and 15 inches across Panama and Costa Rica. Eta could also drop as much as 25 inches of rain across Honduras and central to northern Nicaragua, though some areas could receive up to 35 inches, the Hurricane Center said. The rainfall could lead to life-threatening flooding and landslides.

With Eta, the unusually busy 2020 season tied the record for the most storms with 2005, when Hurricanes Katrina, Rita and Wilma battered the Gulf Coast. That year, so many storms grew strong enough to be named that meteorologists had to resort to the Greek alphabet after exhausting the list of rotating names maintained by the World Meteorological Organization.

The agency never got to Eta, however, because the 28th storm of that year was not identified until the season was over and remained nameless. That last storm in 2005 was a subtropical storm that formed briefly in October near the Azores, a remote archipelago in the middle of the Atlantic Ocean.

“This is the first time that Eta will be used in real time,” said Phil Klotzbach, a research scientist in the department of atmospheric science at Colorado State University in Fort Collins.

With the 2020 season not ending until Nov. 30, it is likely that the 2005 record for most named storms will be broken, he said.

“The odds certainly favor another storm or two forming in November,” he said. “The large-scale environment, especially in the Caribbean, is forecast to remain more conducive than normal for this late in the hurricane season.”

Eta followed Hurricane Zeta, which landed on Oct. 28 in Louisiana as a Category 2 storm. It killed at least six people in Alabama, Georgia, Louisiana and Mississippi.

The hurricanes of 2020 have not matched the intensity of the storms of 2005. That year, eight storms became major hurricanes, which are defined as hurricanes that reach Category 3 or higher.

But the effects of the 2020 season across the South have been widespread.

Hurricane Laura battered Lake Charles, La., in late August; Hurricane Sally lashed the Florida Panhandle with a deluge of rain in September; and in October, Hurricane Delta made landfall in Louisiana less than 20 miles east of where Laura struck, slamming the area as it was still trying to recover.

Government scientists had predicted an unusually busy hurricane season, which began on June 1.

They pointed to factors like higher-than-average sea surface temperatures in the tropical Atlantic Ocean and Caribbean, a strong African monsoon season and a reduced vertical wind shear, which means less wind variability at different altitudes that can disrupt the formation of storms.

But the number of named storms exceeded even initial forecasts from the National Hurricane Center.

“Records are made to be broken,” said Dennis Feltgen, a spokesman and meteorologist with the center in Miami. “But this is not one I would want to break.”