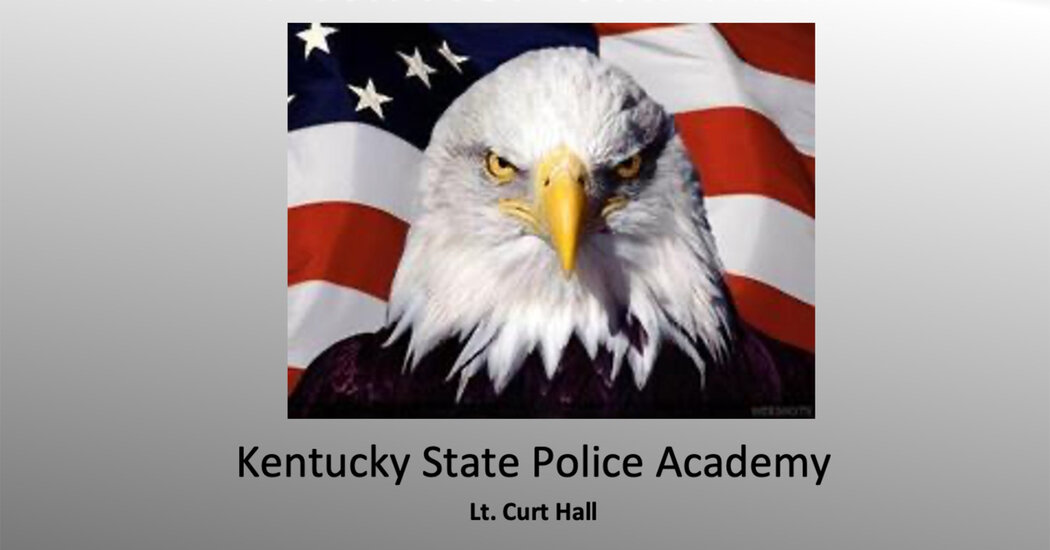 A training slide show that urged officers to “always fight to the death” is no longer used but has raised an outcry in a state that has struggled with police violence.

A slide show once shown to cadets training to join the Kentucky State Police includes quotations attributed to Adolf Hitler and Robert E. Lee, says troopers should be warriors who “always fight to the death” and encourages each trooper in training to be a “ruthless killer.”

The slide show, which came to light on Friday in a report from a high school newspaper, brought harsh condemnation from politicians, Jewish groups and Kentucky residents, but not from the Kentucky State Police department itself, which said only that the training materials were old.

Morgan Hall, a spokeswoman for the Kentucky Justice and Public Safety Cabinet, which oversees the State Police, said that the slide show was “removed” in 2013 and was no longer in use but declined to answer a list of questions, including queries about how long the material was used and how many cadets had seen the training.

Image Kentucky State Police cleared protestors from a park in September during demonstrations over the death of Breonna Taylor.Credit…Mark Lyons/EPA, via Shutterstock

Ms. Hall said in a statement that it was “unacceptable” that such material had ever been included in law enforcement training. “Our administration does not condone the use of this material,” she said. She added that the cabinet agency “began an internal review” after learning about the material on Friday.

Kentucky State Police have assisted the Louisville Metro Police Department during protests over Louisville police officers’ killing of Breonna Taylor, a Black emergency room technician shot by the police when they raided her apartment in March. The state agency also helped to investigate the Taylor killing, providing a ballistics report to the state attorney general before he determined that the officers who shot Ms. Taylor were justified.

The quotations attributed to Hitler, the genocidal leader of Nazi Germany, and Lee, the Confederate general, are included among 33 slides that were shown to cadets in the Kentucky State Police Academy as part of a slide show entitled “The Warrior Mindset.”

“The very first essential for success is a perpetually constant and regular employment of violence,” reads one quotation attributed to Hitler, who is quoted more than anyone in the training document. Some of the statements attributed to Hitler link to a website providing biographical information about him and listing books by and about him.

The training itself emphasizes that troopers must be ready to employ violence in order to do their jobs properly. One of the slides that quotes Hitler — under the heading “Violence of Action” — also says troopers should “be the loving father, spouse, and friend as well as the ruthless killer.” Another says warriors “always fight to the death, they never quit” and that they must be willing to “commit to the fight.”

The title page indicates that the training was created by a retired captain, Curt Hall, who could not be reached for comment. Local news reports, Mr. Hall’s LinkedIn page and a news release from the State Police in 2018 indicate that Mr. Hall was an assistant commander at the police academy from 2005 to 2015 and later served as a commander in the internal affairs department and as the commander of one of the agency’s 16 regional posts.

The lesson appears to be at least partially in line with “warrior training,” a controversial practice that often begins during basic training in academies and is modeled on military boot camp, which many police departments embrace. Many of the nation’s police academies and departments have long emphasized a warrior mentality, experts have said, with officers trained for conflict and equipped with the gear and weapons of modern warfare. Critics have said the specialized training can lead officers to believe they are under constant threat of being harmed and can intensify encounters with civilians.

The slide show was obtained by a lawyer who is suing a Kentucky State Police trooper who shot and killed Bradley J. Grant, 37, in 2018. David Ward, the lawyer, said he had received a copy of the slide show after filing a public records request for documents that the trooper had seen when he was going through training at the academy in 2013.

Mr. Ward said he was shocked by the material, and that it seemed to coincide with the combative nature of the trooper’s encounter with Mr. Grant that preceded the fatal shooting. The State Police said at the time that Mr. Grant had confronted two officers with a shotgun before he was killed, but Mr. Ward said Mr. Grant had been pointing the shotgun at his own chin and asking officers to shoot him.

“This type of training — these quotes — creates a mind set that these troopers are at war, that they need to come to work ready for battle,” Mr. Ward said. “This type of mind set is likely to create an adversarial situation or a violent encounter, and I think that becomes even more likely when you encounter a person who is suffering a mental health crisis and is less likely to respond to verbal commands in a rational way.”

The slide show was first reported by The Manual Redeye, a student newspaper at duPont Manual High School in Louisville, in an article written by the 16-year-old and 14-year-old sons of another lawyer involved in the lawsuit against the trooper.

“This is absolutely unacceptable,” Gov. Andy Beshear of Kentucky, a Democrat, said in a statement. “It is further unacceptable that I just learned about this through social media. We will collect all the facts and take immediate corrective action.”

The 33-slide presentation ends with a quotation usually attributed to Theodore Roosevelt about credit belonging to “the man who is actually in the arena, whose face is marred by dust and sweat and blood.”