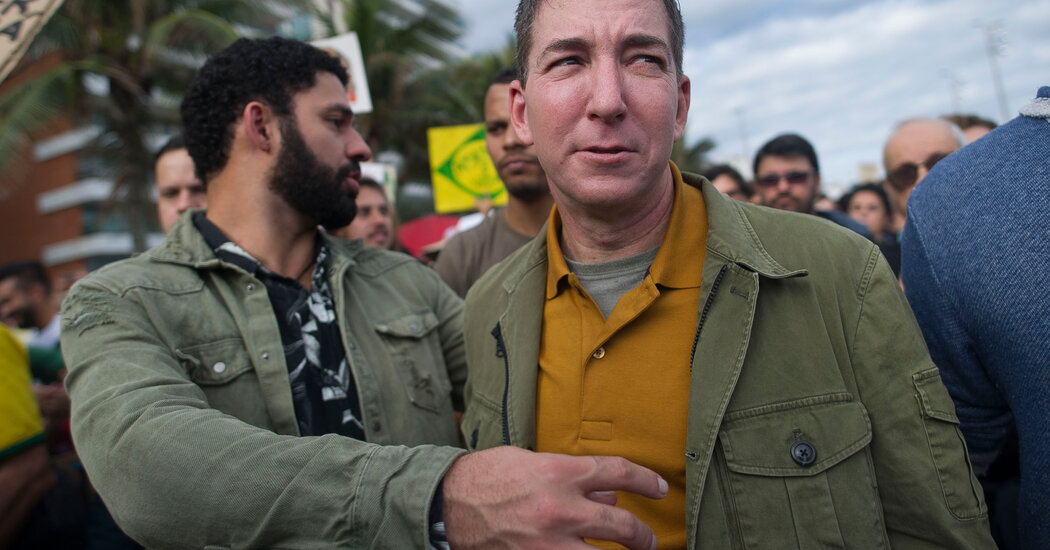 Mr. Greenwald will join other high-profile journalists who have left major media outlets to work largely on their own at Substack.

Glenn Greenwald, right, and his husband, David Miranda, at a protest in defense of the Amazon while wildfires burned in that region last year.Credit…Bruna Prado/Associated Press

The national security journalist and free speech advocate Glenn Greenwald has left The Intercept, the news website he helped create, claiming his work had been censored.

Mr. Greenwald, a former lawyer, wrote a 3,300-word post on the digital platform Substack on Thursday saying that he was leaving the site because it had refused to publish an article he had written on Joseph R. Biden Jr. and his son, Hunter Biden, unless he agreed to remove portions that were seen as critical of the Democratic presidential nominee.

In announcing his decision to leave The Intercept, Mr. Greenwald said that the site’s editors “censored an article I wrote this week, refusing to publish it unless I remove all sections critical of Democratic presidential candidate Joe Biden, the candidate vehemently supported by all New York-based Intercept editors involved in this effort at suppression.” He added that the editors’ actions were “in violation of my contractual right of editorial freedom.”

Mr. Greenwald later posted on Substack what he called “the most recent draft” of the article, which was headlined “The Real Scandal: U.S. Media Uses Falsehoods to Defend Joe Biden From Hunter’s Emails.” The article, in part, examined digital data taken from a laptop computer said to belong to the candidate’s son.

Mr. Greenwald is best known for his investigative journalism based on National Security Agency documents leaked by the former government contractor Edward J. Snowden in 2013. At the time of the leaks, Mr. Greenwald worked for the United States edition of The Guardian newspaper, and the aggressive reporting he conducted with two colleagues, Ewen MacAskill and the documentary filmmaker Laura Poitras, gave The Guardian US the Pulitzer Prize in service journalism in 2014.

Their articles on the N.S.A.’s domestic surveillance program drew heavy criticism from the American and British governments, with lawmakers saying that they had compromised national security. They also made Mr. Greenwald something of a journalistic hero to many liberals. In recent years, however, he has alienated some of his former supporters because of the skepticism he has expressed in a number of Intercept columns concerning the two-year investigation by the special counsel Robert S. Mueller III into possible ties between Donald J. Trump’s 2016 presidential campaign and the Russian government.

Mr. Greenwald’s writing on the Mueller investigation was often at odds with reports by his Intercept colleagues. He has also become a frequent guest on Tucker Carlson’s prime-time program on Fox News, usually a venue for conservatives. On the show’s Oct. 22 episode, Mr. Greenwald took aim at what he said was “corruption that is absolutely pervasive in the U.S. news media,” accusing “top newsrooms” of telling their reporters not to investigate the Hunter Biden emails and claims of corruption against Joe Biden.

During an appearance on Joe Rogan’s podcast on Wednesday — the day before he announced his exit from The Intercept — Mr. Greenwald said, “I don’t think I’ve ever been this disgusted with my colleagues in my profession as I have been in the last three weeks because of this story.” He added, “They’re all desperate for Trump to lose, that’s the reality. They all want Biden to win, so they don’t want to report any information or any stories that might help Biden lose.”

In the post on Thursday, Mr. Greenwald said he would continue to publish his work at Substack, a platform known for its subscription newsletters.

Betsy Reed, the editor in chief of The Intercept, disputed Mr. Greenwald’s claim that he had been censored. In a statement from the editors published on Thursday, The Intercept said, “He believes that anyone who disagrees with him is corrupt, and anyone who presumes to edit his words is a censor. Thus, the preposterous charge that The Intercept’s editors and reporters, with the lone, noble exception of Glenn Greenwald, have betrayed our mission to engage in fearless investigative journalism because we have been seduced by the lure of a Joe Biden presidency.”

The statement included some qualified praise: “We have the greatest respect for the journalist Glenn Greenwald used to be, and we remain proud of much of the work we did with him over the past six years. It is Glenn who has strayed from his original journalistic roots, not The Intercept.”

In a phone interview, Mr. Greenwald said he had received emails from Intercept editors outlining what the publication would allow and not allow in his article. “My arrangement with The Intercept since it began is my opinion pieces are not edited by anyone,” he said.

The Intercept was founded in 2013 by Mr. Greenwald, Ms. Poitras and Jeremy Scahill, with backing from the eBay billionaire Pierre Omidyar. In the post announcing his departure from the site, Mr. Greenwald wrote that he was considering starting his own media outlet. In the interview, he said he had talked with “journalists who kind of are politically homeless, who are neither fully entrenched in the liberal left media or the Democratic Party, nor the pro-Trump right.”

For now, Mr. Greenwald will be part of a growing number of journalists who have left major media outlets to try their luck at Substack. The group includes Andrew Sullivan, formerly of New York magazine, and Matt Taibbi, formerly of Rolling Stone.