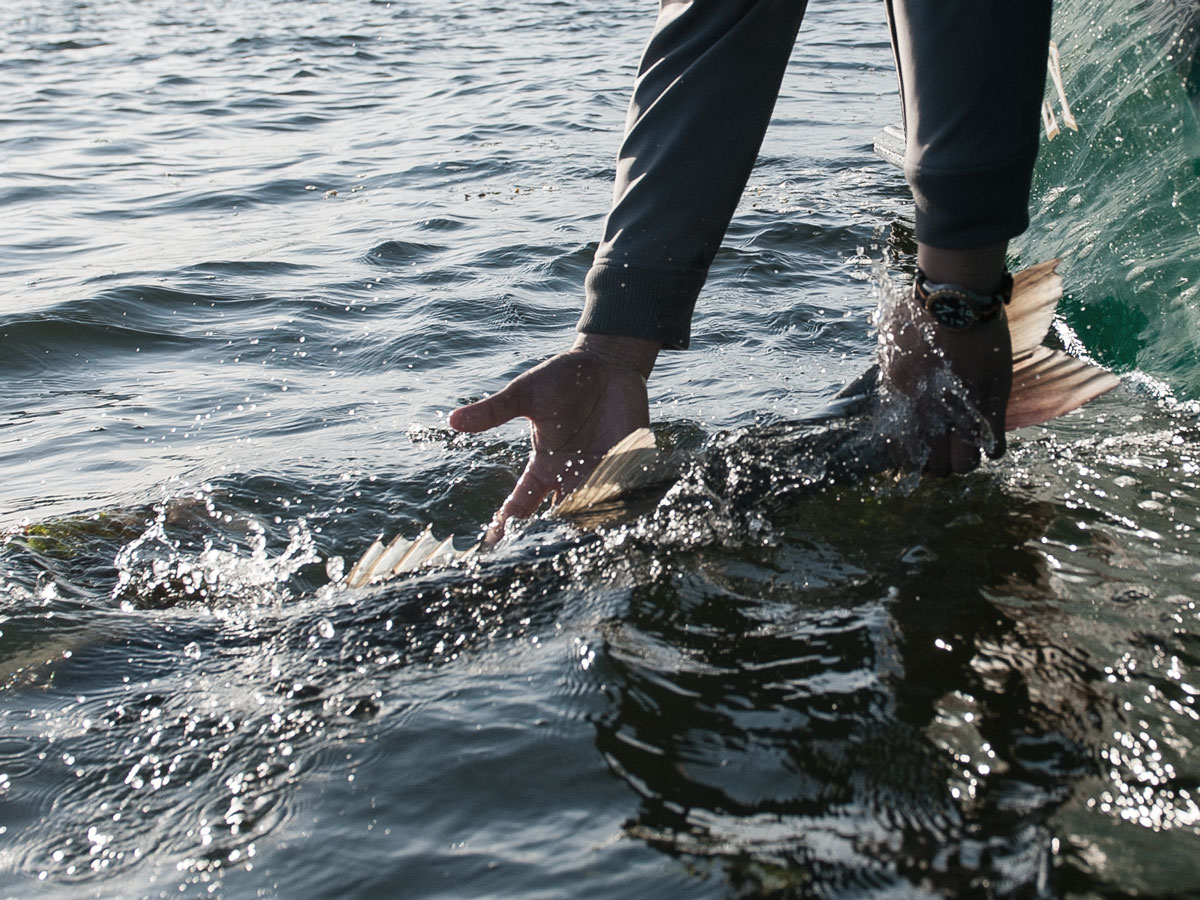 November and December are prime time for striped bass along the central New Jersey Coast, when both surfcasters and boaters enjoy great action as striped bass migrate back to the Carolinas. The fish will gorge themselves on bait and strike artificials with a vengeance. During November, water temperatures start falling from the upper 50s at the beginning of the month into the lower 50s by the end of the month. The action usually continues right through the middle of December until water temperatures drop below 46 degrees.

In November, big gator blues may also be migrating along the coast and are usually present until water temperatures reach about 56 degrees —usually around the middle of November. From then on, striped bass anglers shouldn’t have to worry about them.

Boaters have the best opportunities to catch fish since they can move around quickly from spot to spot, but surfcasters can share in the success if they are willing to move to find the bait. On the beach, working with a network of other anglers should be extremely advantageous since a quick phone call can have you into the heat of the action. On any given day, a massive blitz may occur anywhere bait congregates along the beach. It’s possible that you could be only a few miles away from the action and never know about it. Within an active group of anglers, teams can spread out along the beachfront from north to south and locate the action.

One telltale sign that bait is in your area are diving gulls and gannets that congregate. Sometimes, an area may look like a dead zone, but a move north or south brings a black curtain of birds with bass and blues underneath, an amazing sight.

The three baits that appear near the end of our season are peanut bunker, sand eels, and sea herring. If the ocean is relatively calm, look for peanut bunker moving in pods tight to the beach. Sand eels will take up residence on the sandbars and out to about 70 feet of water. In the boat, eels are easy to read on your fishfinder because they appear as large dark masses right near the bottom. Sea herring are open-ocean baits that move inshore by the thousands around the first few weeks of December as the ocean temperature drops into the low-50-degree range. These baits bring some of the largest striped bass into our area, fish that can range from 20 to 35 pounds.

Small, wide-profile artificials also work well when the bass are feeding on peanut bunker. Small swimming plugs, poppers, and Tsunami or Storm shads in the 3- to 5-inch bunker design and pearl or chartreuse colors are all very effective. If you are tossing metals, the Hopkins Shorty, 1-ounce Kastmaster, ¾- to 1-ounce Krocodile, 1½-ounce Luhr-Jensen Cast Champ, and 2-ounce Crippled Herring are my picks.

When sand eels dominate the scene, jigging with light tackle is the norm. A diamond jig such as an A27, A47 or A67 (with or without a tail) will work just fine, though just about any piece of metal will get hit. When bluefish are in the area, I use diamond jigs so I don’t risk losing more expensive lures.

A key element of vertical jigging from a boat for striped bass is to keep a tight line when you drop the jig back down after jigging the rod up. A striped bass hits a jig as soon as it starts to drop, so if you have slack in your line, you will never feel the bass hit the lure and be able to set the hook.

When sea herring are the main bait, the action will be in the upper 10 feet of the water column. Casting big swimming plugs to imitate the size of the bait is the key. Fishing a large soft plastic in white, yellow, or chartreuse is also an option.

If you ever wanted to catch a striped bass or bluefish on a fly rod, now is the time it could happen. Fishing with one from a boat is much easier than in the surf. Use a quick, integrated sinking line so your fly sinks deep into the water column. Some good sand eel imitations are Popovics Jiggies, large Surf and Stick Candies, along with Clousers and Half-and-Halfs. For sea herring patterns, large Popovics Bucktail Deceivers and Hollow Fleyes are my choices since they are easy to cast and present a wide, long profile in the water.

Expect to see bluefin move inshore at the end of November. Poppers, stickbaits, and soft plastics are the best way to target them.

As we approach the end of November, don’t be surprised if you see big bluefin ranging 2 to 15 miles from the beach. Bluefin show up when some largest baits make an appearance in the same general area. The baits to look for are sea herring, mackerel, and sauries, known as half beaks. There should be no doubt when the bluefin are around because the buzz will quickly spread over the internet message boards and in the tackle shops.

Catching bluefin involves using specialized spinning rods and reels while casting stickbaits, poppers, or large soft plastics. Trolling usually does not produce fish because this is a run-and-gun game – getting in front of a pod of busting bluefin and then casting to them.

Seakeeper – On The Water