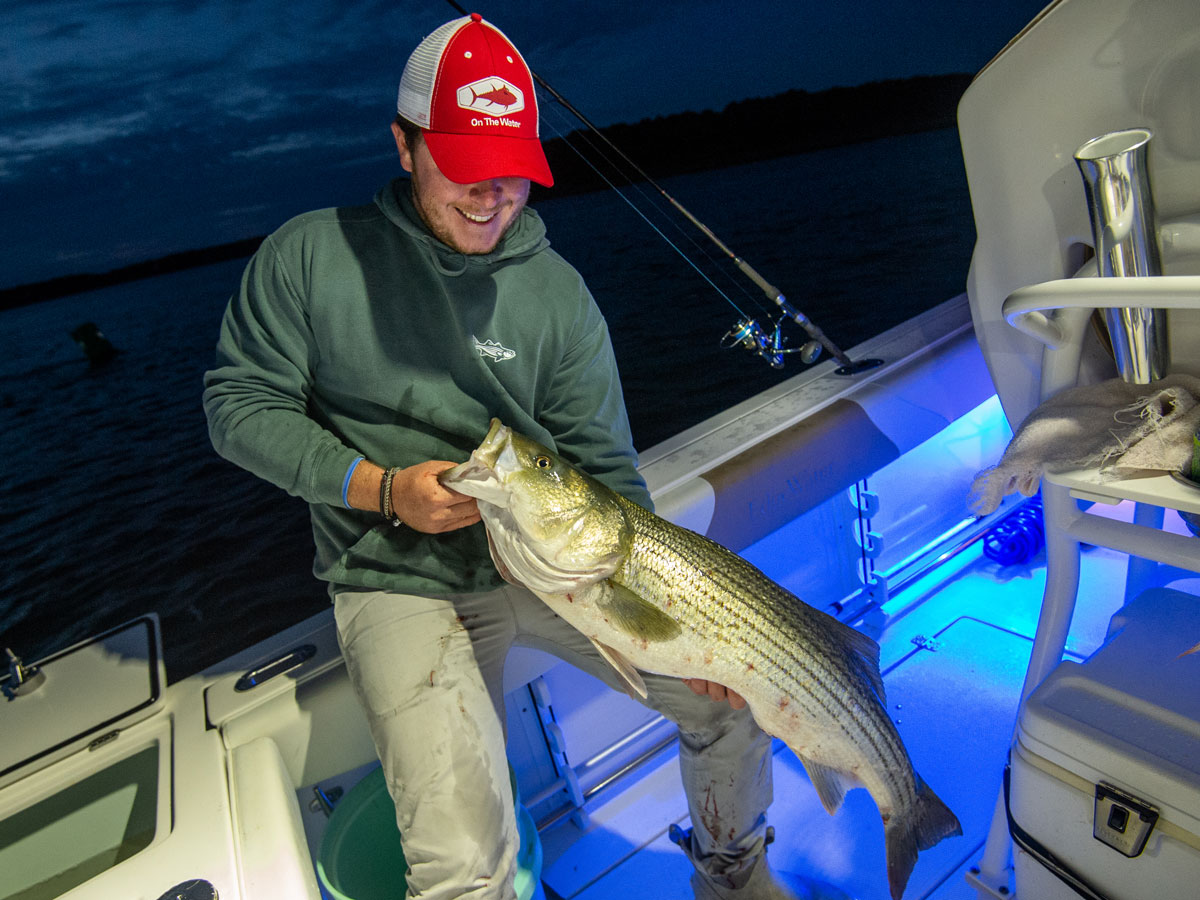 Despite it being late at night, the October full moon has made it almost as bright as day. In the light, you see the rip line begin to form as the ebb current builds. Motoring up current of the structure, you slip your live eel into the water and let it settle near the bottom. The gentle ripples lapping the side of the boat lull you into a hypnotic state as the boat drifts through the rip. Suddenly, you detect urgency at the end of your line as your eel attempts to flee the striped bass eyeing it. Then comes the take that all striper fishermen love—that sharp thump as the bass engulfs the bait and turns. You drop your rod tip to the water and rear back hard. All those questions you’ve been asking yourself about why you are on the water in the middle of the night have just been answered.

The scenario above is one that I look forward to every fall on my home waters of Fire Island Inlet and the Great South Bay. When the calendar turns to October, you can be sure that I will make plenty of trips during daylight hours, but given the choice, I will take the nighttime excursions every time. The solitude of a late-night tide is something I really enjoy—and the fact that the night tides are very productive doesn’t hurt either.

During October, I can be found targeting the migrating striped bass in these waters anywhere from the outer reaches of the Fire Island Inlet to as far east as Ocean Beach, and many places in between. Exactly where I’ll be fishing and the technique I’ll be using is dependent upon the stage of the striper’s migration. In recent years, the October fishing has started out slow in the beginning of the month and taken off as cooler evenings drop the water temperatures.

We will start seeing the leading edge of the southward-bound striped bass migration entering Fire Island Inlet in late September or early October, depending on the prevailing weather conditions. At this time, the inlet proper and nearby West Bar will get the majority of my time. Live eels are my very first choice, but clam chum and whole skimmer clams along with cut baits such as bunker or shad also claim their share of fish. Artificial lures like bucktails, leadhead-and-soft-plastic combos and various plugs are also productive when working over some of the shallower shoals in the inlet.

As we move through the month, the fish push back into the Great South Bay in search of their prey. Drifting eels along the northern side of Robert Moses State Park shoreline can be a successful tactic. Moving back into the bay, you cannot overlook the single largest piece of structure in the entire area—the Robert Moses Causeway Bridge. This structure gets plenty of action from the Captree headboats. The captain stems the current while fishermen cast lures around the bridge pilings. The southern end of the bridge is also a great place to chum with clams as the undulating bottom here holds plenty of stripers right through the fall.

By the end of October, I will fish west of the bridge as, by then, the bass will have pushed well back into the bay and have taken up temporary residence on the reefs and drop-offs found along the stretch from the Fire Island Lighthouse down to the Ocean Beach water tower. Once again, live eels are my favorite bait in these back-bay locations, however, plugs can rack up good scores when fished over the shoals.

Tackle for this type of fishing is pretty basic. If I have any sort of bait—live or otherwise—at the end of my line, then I have a 7-foot, 6-inch or 8-foot conventional rod in my hand. I prefer the longer rods because they allow me to keep the line clear of the outboard motors and the anchor when following a fish around the boat. These rods are matched up with reels such as the Shimano Tekota 600 or Penn International 975. The reels are spooled with either 25-pound-test monofilament for live baits or 30-pound-test braid when fishing cut bait or clams. My live eel rig consists of a 7/0 circle hook snelled to a 5- to 6-foot length of 60-pound-test monofilament leader.

Dragging eels along the bottom is a very effective technique for catching large stripers, especially when done at night. In water less than 15-feet deep, you can get away with not adding a sinker. In deeper water, adding a sinker will help keep your bait in the strike zone.

When fishing the deep, fast-moving waters around the inlet, I will add a banana drail to the end of my running line. The hook’s leader is then connected to the opposite side of the drail to complete the rig. The heaviest drail I carry is 3 ounces, but I will typically go with 2 ounces and drop down to 1 ounce on the slower stages of the current.

As I move back into the bay locations, the currents are not as strong, so I fish the eels weightless and allow them to swim to the bottom on their own. This makes for a very natural presentation.

For my plugging tackle, I use 8-foot medium-heavy spinning rods. Matching reels are spooled with 30-pound-test braided line with a 10-foot topshot of 50-pound-test monofilament connecting to the lure.

I fish quite an expansive area that has a number of different structures spread throughout. It goes without saying that learning all the potential hotspots is going to take time. I believe a good catch can be made fishing in the most obvious of spots. For example, while underway with a good current moving, pay particular attention to the water. Any boiling, swirling or upwelling indicates a change in the bottom that is impacting the water flow uptide of where the boil or rip line is seen. Dropping your baits in up current of the surface disturbance and making a few drifts through that area is always worth a shot.

The Robert Moses Causeway Bridge is a massive structure that holds big numbers of bass after dark in the fall.

The bridge span itself is something that can never be passed by. Drifting eels through the deeper water of the center span or any of the pilings can pay off nicely. Have one person stem the current with the boat and pitch bucktails up tide of the bridge pilings and let them swing into the shadow line. The party boats rack up nice numbers on a nightly basis doing just this.

If plugging stripers is your goal, search out some of the rip lines that show up in the shallower areas around the inlet and back bay. Quietly drop the anchor and position the boat so the stern is just up tide of the rip line. You can then cast plugs parallel to the rip and swim them back to the boat while swinging across the rip line. Vary the length of your casts in order to cover the stretch completely. With a little advance planning, you can have a chum pot aboard with a bucket of clam chum and whole skimmers. Drop the chum pot in the water while anchored up and drift some clam baits back into the rip line as well. Have one angler plug the rip while the other mans the bait rod; deadsticking clam baits only leads to gut-hooked fish, which does not bode well for their survival upon release.

A few general areas to search would be the shoals inside Fire Island Inlet east of the Sore Thumb, the stretch between the Coast Guard station and Fire Island Lighthouse, and the length of East Channel back to Ocean Beach. Each of these areas provide excellent fish-holding structure. Working each spot over in detail will allow you to gain the knowledge of the specific area holding the fish.

While fishing across such a large area offers some challenges, it also allows you to maximize your time fishing your preferred current conditions. For instance, the slack-water period at the inlet itself is as much as two hours ahead of the backwater locations. For this type of fishing, I greatly prefer the ebb (outgoing) current, and typically the first half of it. Let’s say for example that I arrive at the inlet just as the ebb is starting to move. If I fish through the first half of it and am not happy with the results, I can move back into the bay away from the inlet and still catch the stage of the current I like. Instead of having only three hours of my favorite current condition, by moving around, I extend the productive window to five or six hours.

While I do love the solitude of the night fishery, there are times, especially around the moons, when solitude is the last thing you may experience. This is particularly true when fishing the inlet. Operating a boat at night carries inherent risks. All fishermen would be better served if everyone practiced some common courtesy. First off, make sure your boat’s navigation lights are working and actually turned on! Every year I see boats thinking they are being stealthy by drifting with no lights. This is not a good idea. Second, when motoring back up for another drift, consider taking it easy on the throttle. Visibility is greatly reduced and all the others drifting the same area will appreciate the fact that you did not come racing between them.

I have been nighttime fishing for striped bass in my local waters since I was a kid, and I still look forward to evening trips during the month of October. Head out to Fire Island Inlet after dark and experience this fun and productive fishery for yourself.

How to Plan Boat Repairs on a Limited Budget