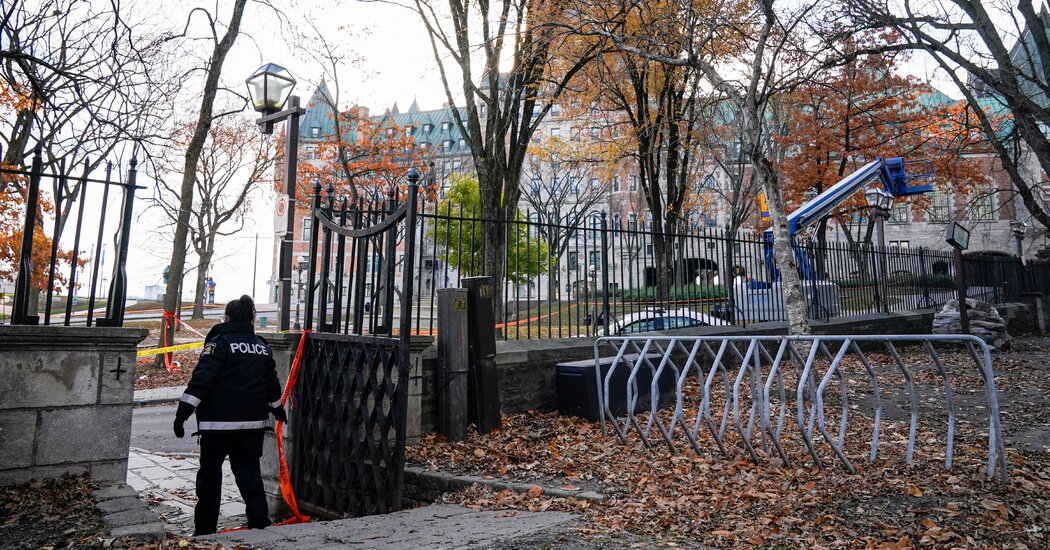 The police arrested a 24-year-old man who they said was dressed in medieval garb and carrying a sword when he went on a rampage.

The attacks occurred late Saturday in a neighborhood near the Quebec provincial Parliament building.Credit…Mathieu Belanger/Reuters

MONTREAL — The police in Quebec City said on Sunday that they had arrested a man dressed in medieval garb and brandishing a sword after a series of stabbings on Halloween night left two people dead and five others wounded.

The attacks occurred late Saturday in a historic district of Quebec City near the building that houses the provincial Parliament.

“It has all the ingredients of a horror film, a man disguised who goes out on Halloween and kills people,” said Hadi Hassin, a local journalist who lives in the area. “I go out every night in the district and will be spooked for a while.”

The police identified the suspected attacker as Carl Girouard, 24, and said he came from a suburb northwest of Montreal. Mr. Girouard, who appeared before a judge via video conference on Sunday, was charged with two counts of first-degree murder and five counts of attempted murder.

The police chief of Quebec City, Robert Pigeon, said the suspect was not known to be associated with any terrorist organization, and the mayor suggested that mental illness might have been a factor.

Chief Pigeon said the attack appeared to have been premeditated and motivated by personal reasons. He added that medical records showed that five years ago the suspect had threatened an act of violence.

The police identified the two people killed as François Duchesne, 56, and Suzanne Clermont, 61. Le Soleil, a Quebec City newspaper, said Ms. Clermont was a jovial hairdresser who enjoyed cooking for her neighbors.

The chief said that some of the five wounded people, who were all residents of Quebec City, had been severely cut but that their injuries did not appear to be life-threatening. “All the citizens of our city are in mourning,” he added.

Maitreyi Pal-Singh, a medical student from New York who lives in the district where the attack took place, said she was walking home around 10:45 p.m. on Saturday when she saw police cars circulating. She said she had stayed up all night with a neighbor and had locked herself in her apartment for the most part, venturing out periodically to look through a window near a stairway to try to determine what was happening.

“Police shut down my street,” she said. “It was terrifying — it was Halloween and there were some kids dressed as Batman or Spider-Man trick-or-treating before everything was closed. You don’t expect something like this to happen in Canada and especially Quebec City.”

Régis Labeaume, Quebec City’s mayor, said the assault brought back bad memories of 2017, when a gunman killed six people at a mosque in the city. He said that, like the shooting, the stabbing attack was an isolated episode and suggested that mental health issues appeared to be the root cause.

“I have a feeling of playing again in an old movie,” Mr. Labeaume said, referring to the mosque attack and calling for a nationwide debate on how to confront mental illness. “This city is one of the safest in the world,” he added.

Quebec City, the province’s political center, with a population of more than a half-million, is a relatively sleepy, picturesque city that typically attracts throngs of tourists drawn by its famed ramparts, cobblestone lanes, centuries-old churches and cliffs overlooking the St. Lawrence River.

But it has been buffeted by the coronavirus pandemic, with restaurants and bars closed to guests. Mr. Hassin, the journalist, said the historic district had been very quiet in recent weeks. He said that not many people had been on the streets or in disguise Saturday night and that Halloween parties had been canceled.

The police said they began searching for the attacker after receiving a call just before 10:30 p.m. Saturday. They discovered victims in several locations, including near the Château Frontenac hotel, an imposing building that is a landmark in the city.

Witnesses told Le Soleil that a victim found near the hotel had been covered with blood.

Earlier, the police advised residents to avoid the Parliament Hill neighborhood and to lock themselves inside as they searched for the attacker. During a two-hour hunt, dozens of armed officers, including some with dogs, combed the area. A man was arrested shortly before 1 a.m. Sunday near the city’s waterfront.

According to Radio Canada, a French-language broadcaster, the suspect was apprehended after a security guard at Quebec’s Old Port saw a man fitting the police description. Local news reports said that the suspect had been found crouching on the floor, barefoot, and that he had not resisted arrest.

The police said on Twitter at 4:20 a.m. that the situation was under control.

Nicholas Lescarbeau, who lives in the area where the rampage took place, said he was at home when worried friends called to check on him and warned him to remain inside. He said residents were deeply shaken. “This is a close-knit neighborhood, and we all know each other,” he said. “It is shocking what happened, but we are happy it is over.”

Prime Minister Justin Trudeau of Canada and François Legault, the premier of Quebec, offered their condolences to the families of the victims. Mr. Legault wrote on Twitter, “Quebec is waking up after a night of horror.”

Shaq Pulls Over to Help Florida Woman After Her Car Crashed