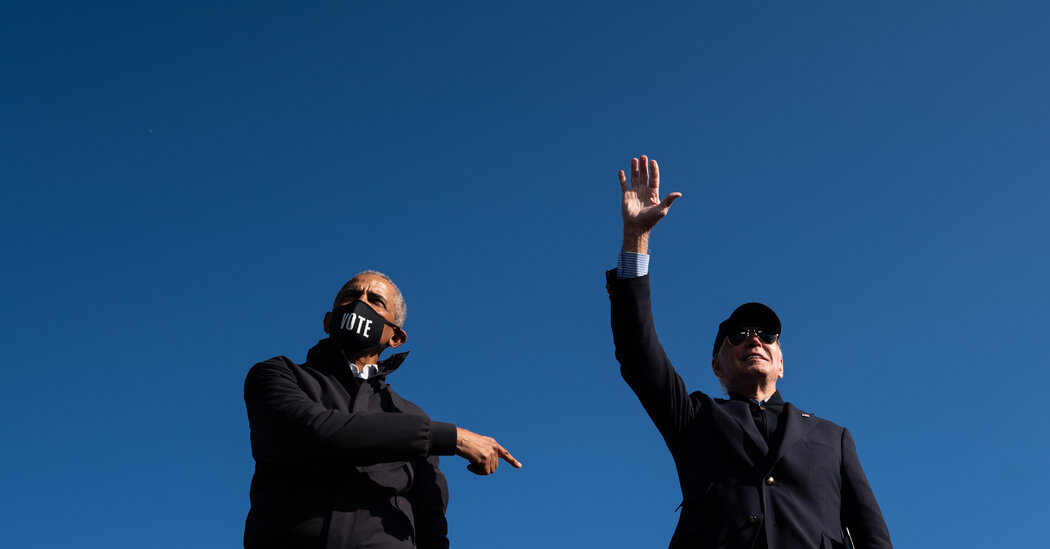 President Trump predicted “bedlam” and a lack of clarity about the presidential results until weeks after Election Day as he barnstormed Pennsylvania, while former Vice President Joseph R. Biden Jr. made his first joint appearance with former President Barack Obama at an event in Michigan.

The last Saturday before Election Day offered traditional last-minute frantic campaigning in battleground states played against the backdrop of the extraordinary rancor, high stakes and sense of disruption reflecting a pandemic, an economic downturn and recurring protests and unrest at the close of Mr. Trump’s first term.

The dueling schedules showed the intensity with which the two campaigns are approaching the final days of the election and illustrated differences once again in their basic approach to the worst public health crisis in a century.

Mr. Biden talked about taking the coronavirus pandemic seriously, while Mr. Trump mocked his opponent for his focus on the virus and falsely accused him of favoring “deadly” lockdowns.

In remarks in Newtown, Pa., and Reading, Pa., Mr. Trump stoked fears of an election left unsettled after voting closes on Nov. 3 and about the prospects that ballots would not count.

“You’re going to be waiting for weeks” as votes are counted, Mr. Trump declared in Newtown.

At his next stop, in Reading, Mr. Trump derided a Supreme Court decision rejecting a request from Pennsylvania Republicans to decide whether the state could continue accepting ballots for three days after Nov. 3.

“You see what’s going on, right?” Mr. Trump said of Democrats. “Somebody’s going to play games, and they just got an extension. What’s the extension all about? Wouldn’t you like to hear, Nov. 3, we win, we lose? We win, we lose. Whatever.”

The question of how long ballots can be accepted in battleground states has been a dominant one as Nov. 3 approaches. So has the question of whether Mr. Trump will try to declare victory if he is leading in specific states on Election Day, regardless of whether they have been called in his favor.

Mr. Trump barely addressed the coronavirus pandemic at his first two stops, other than to praise his administration, complain about Mr. Biden’s focus on the pandemic and falsely claim once again that the country was “rounding the turn” as the number of daily new cases nationally has spiked to almost 100,000.

Mr. Obama, appearing with Mr. Biden at a drive-in rally in Flint, Mich., for their first stop of the day, mocked Mr. Trump as heartless.

Noting Mr. Trump’s baseless claim a day earlier that doctors were profiting from coronavirus deaths, Mr. Obama said, “He cannot fathom, he does not understand the notion that somebody would risk their life to save others without trying to make a buck.”

Mr. Trump is continuing to hold crowded rallies as the pandemic rages, and Mr. Obama ridiculed him for his fixation on crowd sizes, asking: “Did no one come to his birthday party when he was a kid? Was he traumatized?”

In the past two weeks, Mr. Obama campaigned solo for Mr. Biden in Pennsylvania and Florida, but Saturday was the first time in the general election that he and Mr. Biden had campaigned together in person.

At the event in Flint, Mr. Biden praised Mr. Obama and ripped Mr. Trump over the pandemic. He too invoked Mr. Trump’s baseless statement made at a rally on Friday about doctors and coronavirus-related fatalities.

“What in the hell is wrong with this man?” Mr. Biden asked. “Excuse my language, but think about it. It’s perverted. He may believe it because he doesn’t do anything other than for money.”

And he spoke of the stakes for the nation in this year’s vote.

“I don’t care how hard Donald Trump tries,” Mr. Biden told the crowd. “There’s nothing — let me say it again — there’s nothing that he can do to stop the people of this nation from voting in overwhelming numbers and taking back this democracy.”

Where both Mr. Trump and Mr. Biden campaigned on Saturday was as revealing as what both men said.

The two states were part of the so-called Blue Wall — Michigan, Wisconsin and Pennsylvania, which have leaned Democratic in recent national elections but which were crucial to Mr. Trump’s victory in 2016 over Hillary Clinton.

Mr. Trump has struggled in all three states throughout the 2020 campaign and is pressing to keep at least one of the three as part of his map this year, in an election cycle marked by a pandemic and an economic recession. Pennsylvania is seen by Mr. Trump’s advisers as the likeliest state among the three for him to win.

In Newtown in Bucks County, Mr. Trump delivered a subdued speech, speaking from the teleprompter at first, to several hundred people seated in folding chairs arrayed in a field in front of a stage and a podium.

The speech took place in front of the farmhouse where George Washington planned the crossing of the Delaware River. The small crowd sat close together, mostly unmasked. Unlike it has done at his other rallies, Mr. Trump’s campaign did not position energetic supporters in a stand behind him.

Image President Trump on Saturday at a rally in Newtown, Pa.Credit…Anna Moneymaker for The New York Times

“We have done an incredible job. At some point they are going to recognize that,” Mr. Trump said after mocking Mr. Biden for focusing too much on the virus. “We’ve done an A-plus job. I give ourselves a D, or maybe an F, in terms of public relations.”

After his third rally, in Butler, Pa., a CNN reporter posted on Twitter photos of crowds searching for buses to leave the event in 41-degree weather, an echo of the debacle in Omaha this past week when the campaign’s outdoor rally ended and the buses were nowhere to be found on a frigid night.

A Trump campaign official on Saturday insisted there were dozens of buses and that it was simply taking awhile for the line to move.

Ending his day with a rally in Montoursville, Pa., Mr. Trump cackled about his supporters “taunting” Mr. Biden at his outdoor events by driving by and honking horns, and then cheered on his supporters who surrounded a Biden campaign bus in Texas. Biden campaign officials said they had to cancel a planned event because the Trump supporters tried to force the bus off the road.

“Anybody see the picture of their crazy bus driving down the highway, they are surrounded by hundreds of cars, they are all Trump flags all over the place,” Mr. Trump said, chuckling.

And he tried to sow doubt about the safety of voting in Philadelphia, a city with a large Black population, similar to what he did in 2016.

“Are they going to mysteriously find more ballots” after polls close, he asked. “Strange things have been known to happen, especially in Philadelphia.”

Mr. Biden and Mr. Obama ended with a drive-in rally in Detroit, where hundreds of people waited in cars to see them on Belle Isle, a state park on an island in the middle of the Detroit River with expansive views of the skylines of Detroit and Windsor, Ontario.

Stevie Wonder performed before they addressed the crowd. In his speech, Mr. Obama added another jab as he talked about Mr. Trump’s “obsession with crowds,” asking, “Is Fox News not giving him enough attention?”

Mr. Biden mocked Mr. Trump for having written off as business expenses more than $70,000 paid to style his hair during “The Apprentice.”

For many drawn to the rally, it was time for a change.

“The last four years have been hell,” said Miriam Pizana, who came to the event with her daughter Kristen. “We never knew what the chief of staff or communications directors’ names were before, and now we know them all, and not for anything good.”