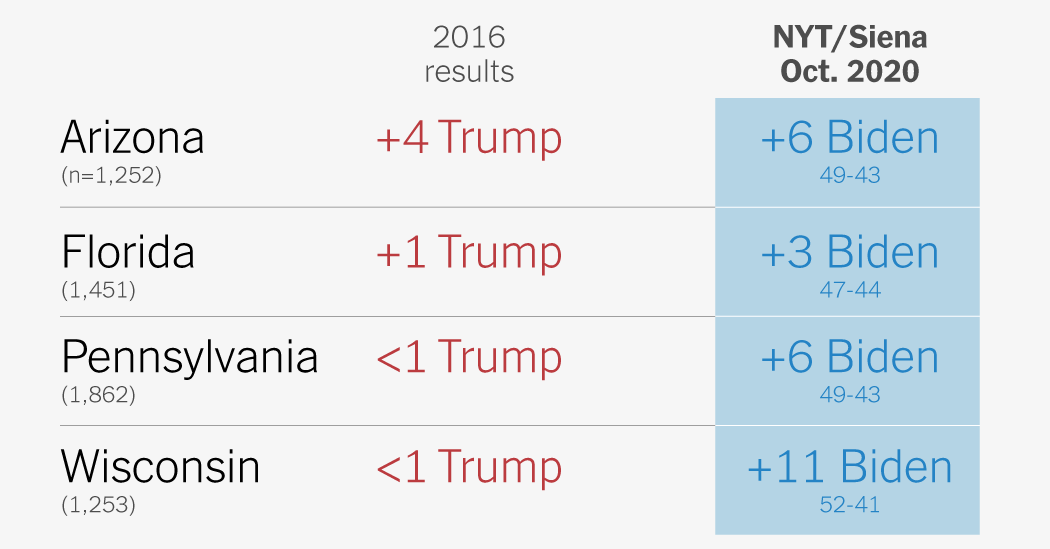 Joseph R. Biden Jr. leads President Trump in Pennsylvania, Florida, Arizona and, by a wide margin, in Wisconsin, according to a Times/Siena College poll.

Joseph R. Biden Jr. holds a clear advantage over President Trump across four of the most important presidential swing states, a new poll shows, bolstered by the support of voters who did not participate in the 2016 election and who now appear to be turning out in large numbers to cast their ballots, mainly for the Democrat.

Mr. Biden, the former vice president, is ahead of Mr. Trump in the Northern battlegrounds of Wisconsin and Pennsylvania, as well as in the Sun Belt states of Florida and Arizona, according to a poll of likely voters conducted by The New York Times and Siena College. His strength is most pronounced in Wisconsin, where he has an outright majority of the vote and leads Mr. Trump by 11 points, 52 percent to 41 percent.

Based on a New York Times/Siena College poll of likely voters from Oct. 26 to Oct. 31.

Mr. Biden’s performance across the electoral map appears to put him in a stronger position heading into Election Day than any presidential candidate since at least 2008, when in the midst of a global economic crisis Barack Obama captured the White House with 365 Electoral College votes and Mr. Biden at his side.

Mr. Trump’s apparent weakness in many of the country’s largest electoral prizes leaves him with a narrow path to the 270 Electoral College votes required to claim victory, short of a major upset or a systemic error in opinion polling surpassing even the missteps preceding the 2016 election. Should Mr. Biden’s lead hold in three of the four states tested in the survey, it would almost certainly be enough to win, and if he were to carry Florida, he would most likely need to flip just one more large state that Mr. Trump won in 2016 to clinch the presidency.

In the closing days of the campaign, Mr. Biden has a modest advantage in Florida, where he is ahead of Mr. Trump by three points, 47 percent to 44 percent, a lead that is within the margin of error. He leads by six points in both Arizona and Pennsylvania. In no state did Mr. Trump’s support climb higher than 44 percent.

The margin of error is 3.2 percentage points in Wisconsin and Florida; 3 points in Arizona and 2.4 points in Pennsylvania.

Mr. Biden has consistently held the upper hand over Mr. Trump across the electoral map in polling conducted by The Times since late last spring. While that advantage has varied over time, and has differed from state to state, he has at no point slipped behind Mr. Trump in any of the swing states that are likeliest to decide the election.

Mr. Biden’s lead is armored against last-minute developments in the race because of the scale of early and mail-in balloting that has already taken place as the country copes with a resurgence of the coronavirus. More than 90 million Americans had already cast their ballots as of midday Saturday, according to the United States Election Project. In three of the four states The Times surveyed, a majority of respondents said they had already voted, with Pennsylvania the exception.

The president, who narrowly carried all four states against Hillary Clinton, is now running behind his 2016 vote shares in all of them, a grave position for a sitting president just days before the election. He has also trailed consistently in public polls of Michigan, another large state he captured in 2016, which along with Wisconsin and Pennsylvania was part of the so-called Blue Wall along the Great Lakes that Democrats had relied on for decades.

Image President Trump at a rally in Reading, Pa., on Saturday. Pennsylvania is a critical state to both candidates.Credit…Anna Moneymaker for The New York Times

Amid that bleak outlook, the president has continued to baselessly cast doubt on the integrity of the election. On Saturday in Pennsylvania, he told supporters that the nation could be waiting for weeks to learn of a winner and that “very bad things” could happen as ballots are counted in the days after the election.

Mr. Trump has continued to hold onto most of the coalition that elected him in the first place, made up chiefly of rural conservatives and white voters who did not attend college. In Florida, the president appears to have improved his position somewhat with Hispanic voters over the last four years, but he has slipped significantly with college-educated whites there.

More broadly, Mr. Trump is facing an avalanche of opposition nationally from women, people of color, voters in the cities and the suburbs, young people, seniors and, notably, new voters. In all four states, voters who did not participate in 2016, but who have already voted this time or plan to do so, said they support Mr. Biden by wide margins. That group includes both infrequent voters and young people who were not yet eligible to vote four years ago.

In Wisconsin, voters who did not cast a ballot in 2016 favor Mr. Biden by 19 points. They have a similarly lopsided preference in Florida, where Mr. Biden leads by 17 points. His advantage with people who did not vote in 2016 is 12 points in Pennsylvania and 7 points in Arizona. 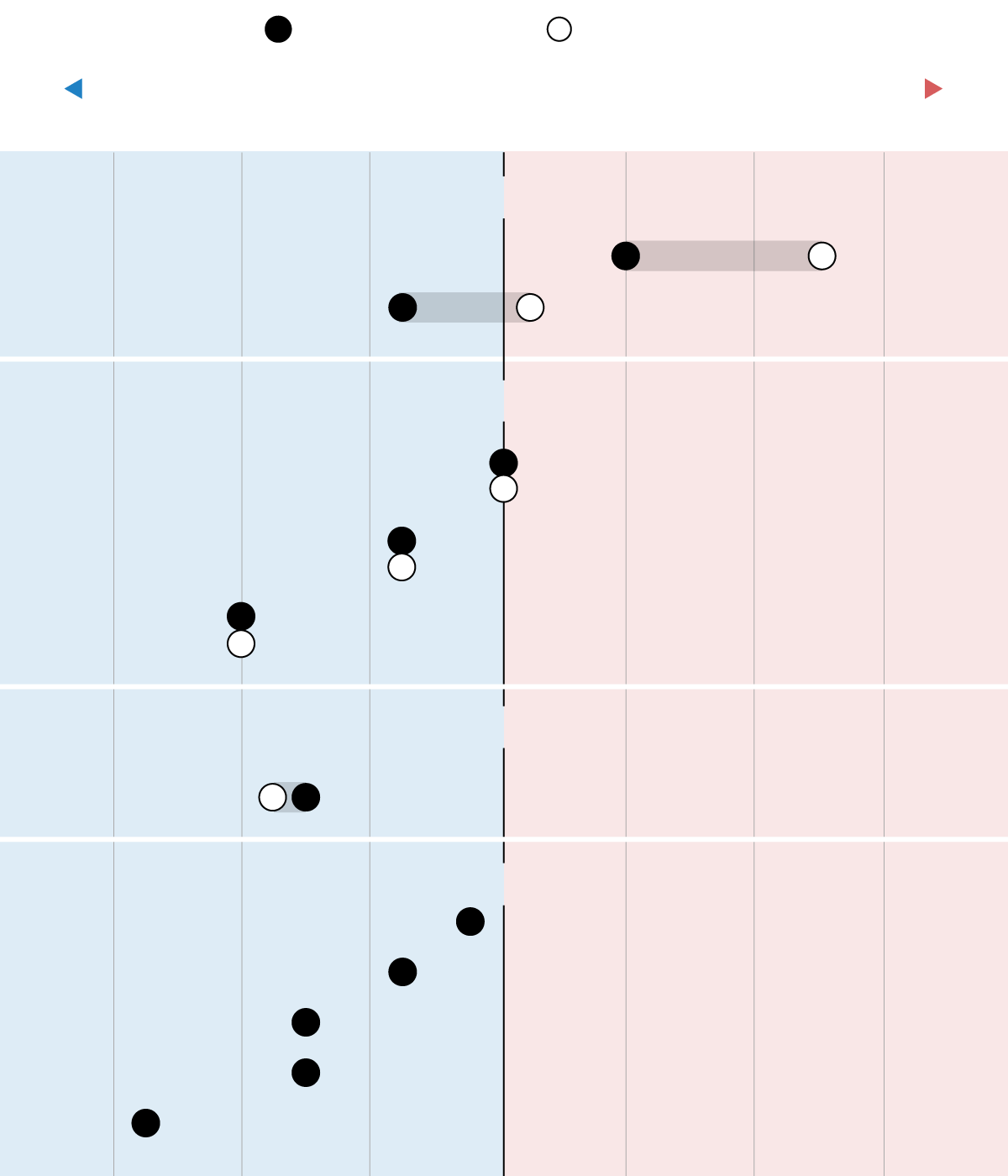 Where Trump polled behind the Republican Senate candidate

Where Trump and the Republican Senate candidate polled evenly

Where Trump polled ahead of the Republican Senate candidate

States with no Senate races

Where Trump polled behind

Where Trump and the Republican Senate candidate polled evenly

Where Trump polled ahead of

States with no senate reaces

*The special Senate election in Georgia, which includes multiple Democrats and Republicans, is not shown.

Melissa Dibble, 47, of Boynton Beach, Fla., is one of those newly active voters. A registered independent, Ms. Dibble said she did not vote in 2016 because she did not believe Mrs. Clinton was “the right president for our country” and found Mr. Trump “laughable.” She said on Friday that she planned to vote for Mr. Biden that afternoon.

“I know how important it is to vote, but I couldn’t wrap my head around the options at that point,” Ms. Dibble said of the 2016 election. She said she was voting for Mr. Biden because “I really want change. I can’t believe that we have a president who is, at night, in bed tweeting nonsense and just talks poorly about people.”

Vince Kowalewski, 73, of Muhlenberg Township, Pa., said he had never voted in his life but was intent on voting against Mr. Trump, whom he called “the worst president we’ve ever had.”

“I have to go in there and vote against him,” Mr. Kowalewski said.

The numbers on new voters represent a setback for the president, whose advisers have long contended he would outperform his polling numbers because of the support he would receive from infrequent or inconsistent voters. Republicans continue to hope that the Trump campaign’s voter-registration and turnout machinery might give him a crucial edge over Mr. Biden in a few key battlegrounds, or at least lift the party’s down-ballot candidates enough to maintain control of the Senate.

Based on the poll, however, it seems that Mr. Biden rather than Mr. Trump could be the beneficiary of record-busting turnout.

Still, the enthusiasm Mr. Trump stirs in his supporters remains a factor in the election. Linda Shoop, of Halifax, Pa., said she did not vote in 2016 but not for lack of a preference: A Trump supporter, Ms. Shoop has arthritis and struggles to get around. But with absentee voting more widely accessible this year, she said she would vote by mail for the president.

“He has common sense,” Ms. Shoop said, describing him as more forthright than a longtime politician like Mr. Biden. The president, she said, “doesn’t lie to you. If he says he’s going to do something, he goes and he does it.”

If the president is defeated, the most obvious explanation may be his weakness with women. Mr. Biden led Mr. Trump by double digits among female voters in each of the four states, and in some states the advantage was so significant that it offset Mr. Trump’s strength among men.

In Arizona, for example, the president had an eight-point advantage with men but Mr. Biden was the overwhelming favorite of women, winning 56 percent of them compared with Mr. Trump’s 38 percent.

The other group that is propelling Mr. Biden is college-educated white voters, a traditionally Republican bloc that has fled the Trump-era party. The former vice president is leading by double digits among white voters with college degrees in Wisconsin, Pennsylvania and Arizona and beating him, 48 percent to 45 percent, with that constituency in Florida.

In Maricopa County, Ariz., home to Phoenix and its suburbs, Mr. Biden is winning 48 percent of the vote compared with 42 percent for Mr. Trump, according to the survey. In 2016, Mr. Trump won the county by three points.

Mr. Biden is also poised to become the first Democrat in 20 years to carry older adults, the voters who are most at risk with the coronavirus. In Wisconsin and Pennsylvania, the former vice president is leading by double digits with older voters. And in Florida and Arizona, retiree havens with wealthier and more tax-phobic seniors, Mr. Trump is effectively tied with Mr. Biden among older voters despite having won with them convincingly in both states in 2016.

The president remains in contention in Florida on the strength of his support from working-class whites and his gains among Hispanic voters. He’s running more competitively with Florida Latinos than he did in 2016, and 9 percent of them remain undecided.

Hispanic men in Florida, in particular, are more willing to support Mr. Trump. The poll found the two candidates splitting this group almost evenly, with Mr. Biden ahead by just one point. But the president is facing an even larger gender gap in the Hispanic community than he is over all: Latinas favor Mr. Biden by 39 points.

Farah Robles Figueroa, of West Palm Beach, said she had already cast her vote for Mr. Biden in the largest of the traditional swing states. Ms. Robles, 32, is a registered Democrat but said she had sat out the 2016 election because she believed Mrs. Clinton was certain to win. She said she admired Mr. Biden’s personal character and approved of his recommendations for fighting the coronavirus, like mandating the use of masks.

But Ms. Robles also said she believed there was a larger issue at stake in the vote.

“I don’t want to be dramatic,” she said, “but I’m voting this year because it feels like democracy is at stake.”

Here are the crosstabs for the poll.

Environmental News Network – Stay Hydrated: It’s Going to Be a Long, Hot July for Much of U.S.