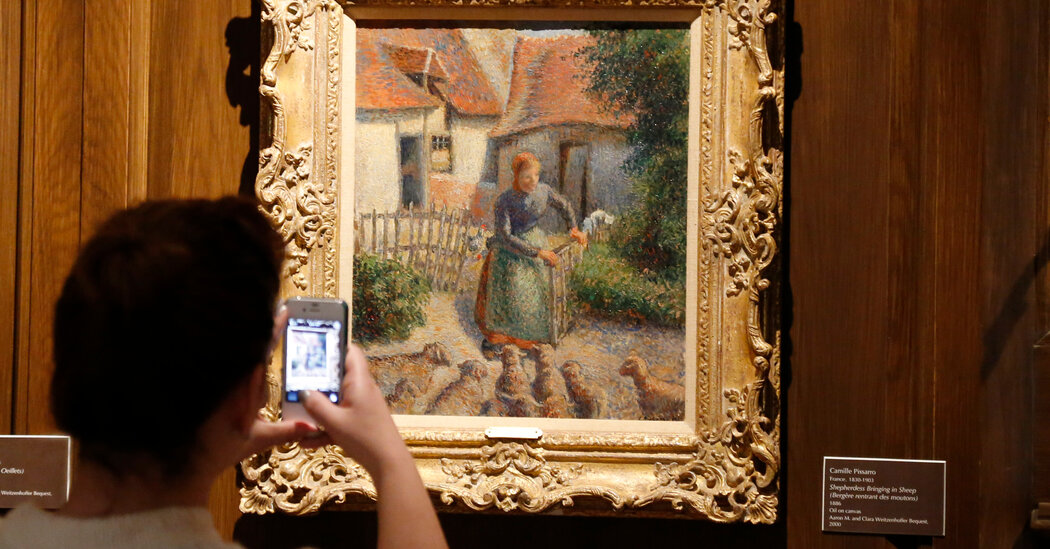 A Holocaust survivor wants to revisit a settlement with an Oklahoma art museum over a painting once owned by her father.

Camille Pissarro’s “La Bergère Rentrant des Moutons,” or “Shepherdess Bringing in Sheep,” is back in the news. The painting, looted by Nazis in World War II, belongs to a woman in France who shares it with an American museum, but is seeking to change the arrangement.  Credit…Sue Ogrocki/Associated Press

When Léone Meyer discovered in 2012 that a painting Nazi looters had stolen from her father was in the collection of an American museum, her first instinct was to demand its return.

But Ms. Meyer, who lives in Paris, and the Fred Jones Jr. Museum of Art at the University of Oklahoma, struck an agreement in 2016: The 1886 painting, “La Bergère Rentrant des Moutons,” or “Shepherdess Bringing in Sheep,” by Camille Pissarro, would be displayed at a museum in France for five years, then would rotate every three years between the university and one or more French institutions of Ms. Meyer’s choosing. Ms. Meyer, who is 80 years old, also agreed that, either during her lifetime or in her will, she would give the painting to an art institution in France.

In 2018, Ms. Meyer, a Holocaust survivor who owns the painting, tried to donate it to the Musée d’Orsay, where it has been on display since 2017, for its permanent collection.

But the museum refused, telling Ms. Meyer it did not want to assume the cost and risk of transporting the painting to America every three years, which would have been required under the terms of the settlement (Ms. Meyer had insured the painting while it was on temporary display). Ron Soffer, a lawyer for Ms. Meyer, said that any other French institution she offered it to would presumably do the same.

Ms. Meyer is now seeking to prevent it from being displayed at the University of Oklahoma, where it is scheduled to return in July. She has also filed a lawsuit in France seeking permanent ownership without any rotation.

But the university disagrees that the French museum’s refusal to accept the work — and the possibility that the painting could remain in America indefinitely — is grounds for voiding the original deal.

Ms. Meyer “now inexplicably seeks to break” a settlement that “was heralded as a first-of-its-kind U.S.-France international art sharing agreement,” the university’s president, Joseph Harroz, Jr., and the University of Oklahoma Foundation president and chief executive, Guy Patton, said in a statement on Thursday.

The university has acknowledged that the painting was stolen by the Nazis from Ms. Meyer’s father, but said in the previous court proceedings that it did not want to return the work because of procedural rules and the statute of limitations. It also produced evidence that the previous owners, the Weitzenhoffer family, who bequeathed it to the university in 2000, having bought it at a New York gallery, had acted in good faith.

But Ms. Meyer’s lawyer said a ruling by France’s highest court in July determined that the possessors of stolen art must return the work to the rightful owner free of charge, regardless of how they came to possess it.

Mr. Soffer said Ms. Meyer has offered a compromise of a partner exhibit between the university and the Musée d’Orsay, in which the French museum would loan the university other work, such as a painting by Renoir. But the university’s position is that the deal is done.

“For all the good faith that the OU Foundation and the University of Oklahoma have extended to Ms. Meyer, it is disappointing that she is actively working to renege on the agreement,” the statement said. “We are ready to challenge this unwarranted threat in U.S. and French courts.”

The case is scheduled to be heard by a French court in January.