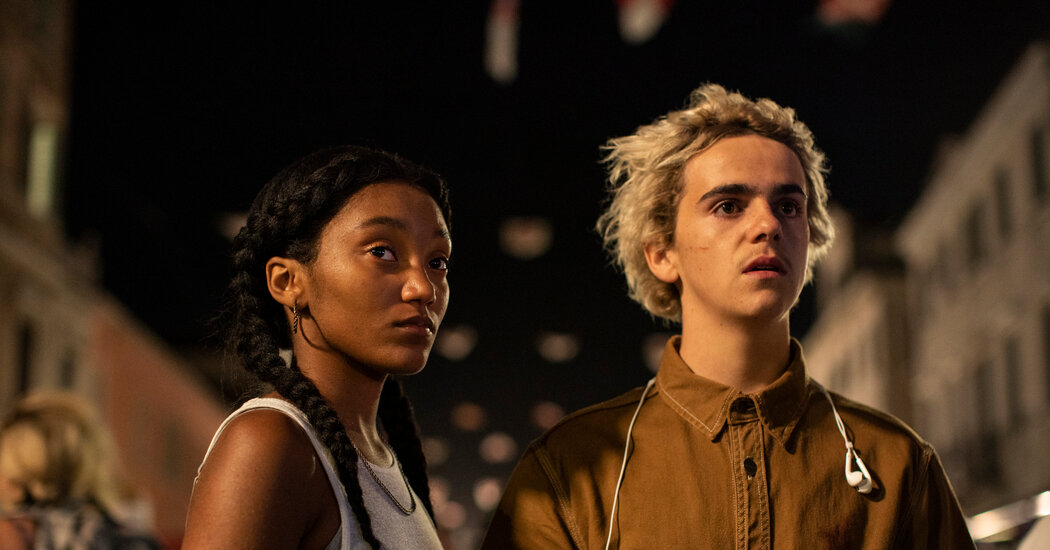 Luca Guadagnino’s coming-of-age series wraps its first season, Stephen Colbert and news outlets weigh in on the election results, and the Rock & Roll Hall of Fame welcomes a new class of inductees.

Jordan Kristine Seamón and Jack Dylan Grazer in “We Are Who We Are.”Credit…HBO

Between network, cable and streaming, the modern television landscape is a vast one. Here are some of the shows, specials and movies coming to TV this week, Nov. 2-8. Details and times are subject to change.

WE ARE WHO WE ARE 10 p.m. on HBO. Luca Guadagnino’s coming-of-age series set on a U.S. Army base in Italy wraps its first season. The show explores the complicated trappings of adolescence and identity, following the bond between Fraser (Jack Dylan Grazer) and Caitlin (Jordan Kristine Seamón). In his New York Times review, James Poniewozik wrote, “As the two meet and form a close, platonic alliance, the focus broadens to Caitlin’s circle of friends — white and Black, Christian and Muslim, American and European, military and civilian, all thrown together in a limbo that’s both America and Italy and yet not wholly either, living a curious existence that’s both tightly regimented and exhilaratingly free.”

THE GOOD DOCTOR 10 p.m. on ABC. Covid-19 has come to San Jose St. Bonaventure Hospital. On the Season 4 premiere, Dr. Shaun Murphy (Freddie Highmore), a young surgeon with autism and savant syndrome, works to treat a patient with an unpredictable illness, while also weighing quarantine protocols with his new relationship. Meanwhile, the rest of the team works to combat the evolving pandemic, while still reeling from the devastating earthquake at the end of Season 3.

ELECTION NIGHT 7 p.m. on ABC and NBC; 8 p.m. on CBS and FOX. After the polls close on Tuesday, tune in to watch the latest election and voting news in the presidential race between President Trump and Joseph R. Biden Jr.

STEPHEN COLBERT’S ELECTION NIGHT 2020 11 p.m. on Showtime. If you’re in for a more comedic take on the evening’s election news, Stephen Colbert of “The Late Show” will host a one-hour special reacting to the results in real time. Joining Colbert virtually will be Charlamagne Tha God and the journalists Alex Wagner, John Heilemann and Mark McKinnon from Showtime’s “The Circus.”

THE PETRIFIED FOREST (1936) 6 p.m. on TCM. This film, based on Robert E. Sherwood’s play of the same name, stars Leslie Howard, Bette Davis and Humphrey Bogart. In it, Howard plays Alan Squire, a disillusioned British writer who wanders into a diner on the edge of Arizona’s Petrified Forest and meets Gabrielle (Davis), a young woman who dreams of a more cultured existence in France. But their futures are thrown into question when the outlaw Duke Mantee (Bogart) takes the diner and its guests hostage on his way to Mexico.

YOUNG SHELDON 8 p.m. on CBS. On the season premiere of this “Big Bang Theory” spinoff, a bright, young Sheldon Cooper (Iain Armitage) graduates from high school and prepares to head off to college at 11 years old.

B POSITIVE 8:30 p.m. on CBS. Thomas Middleditch stars in this new comedy as Drew, a therapist and newly divorced father who needs a kidney transplant. Enter Gina (Annaleigh Ashford), an old friend from high school who swoops in to save the day, offering Drew one of hers and laying the groundwork for an unlikely bond.

RIDE THE HIGH COUNTRY (1962) 6 p.m. on TCM. In this Sam Peckinpah-directed western, Joel McCrea plays a former lawman hired to protect and transport a gold shipment from a mining camp to a nearby city. He enlists the help of an old friend, Gil Westrum (Randolph Scott); Gil’s young partner Heck Longtree (Ron Starr); and Elsa Knudsen (Mariette Hartley), a young girl whom the men take under their wing. In his New York Times review, Howard Thompson called the movie’s humor “spur-sharp” and “a downright pleasure to watch.”

THE CHRISTMAS YULE BLOG 8 p.m. on Lifetime. Lifetime’s annual series of holiday programming, known as It’s a Wonderful Lifetime, is in full swing. In this film, a travel writer heads to New Mexico to cover a 100-year-old Christmas parade in the small town of Carte De Amor. There, she meets a high school music teacher who helps open her eyes to the city’s holiday traditions.

THE ROCK & ROLL HALL OF FAME 2020 INDUCTIONS 8 p.m. on HBO. Join Dave Grohl, Bruce Springsteen, Miley Cyrus, Jennifer Hudson and others in welcoming this year’s class of Rock & Roll Hall of Fame inductees. Grohl kicks off the show, introducing the 2020 honorees Depeche Mode, the Doobie Brothers, Whitney Houston, Nine Inch Nails, the Notorious B.I.G., T-Rex and the Ahmet Ertegun Award recipients Jon Landau and Irving Azoff. Through pretaped interviews and archival footage, the special guests will reflect on how the inductees influenced their lives and careers.

REBUILDING PARADISE (2020) 9 p.m. on National Geographic. Ron Howard directed this documentary about the devastating wildfire that tore through the town of Paradise, Calif., in November 2018. With first-person footage of the fire and interviews with the residents, the film chronicles the town’s rebuilding efforts and its residents’ decisions on whether it was safe to return. In his review for The New York Times, Ben Kenigsberg wrote, “Watching Paradise’s high schoolers graduate at their athletic field — something initially thought to be improbable — inevitably raises the question of how the district will fare through the pandemic.”

COBRA 10 p.m. on PBS (check local listings). This new, six-part series follows a British prime minister in crisis as a geomagnetic solar storm approaches Earth. He convenes an emergency meeting with politicians, experts and contingency planners in a race to find a solution, while the leaders’ personal drama and political conflicts play out in the background.